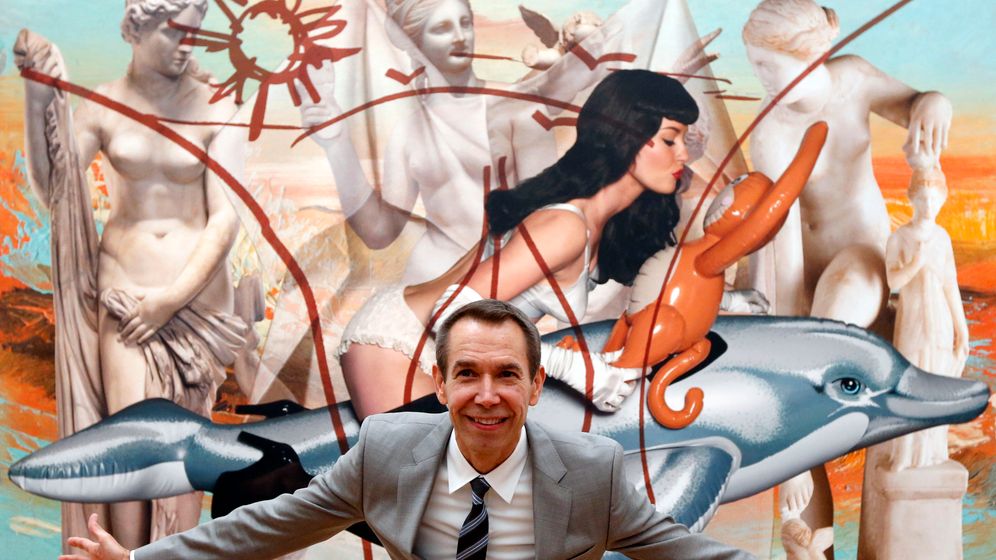 Jeff Koons' studio, in a somewhat bleak part of Manhattan, looks about as unassuming as a big garage. Inside, a crisis is taking shape. Koons is on the verge of failure, at least visually.

A photographer is shooting portraits of the artist. Koons takes his time, conscious of how important images are to him. He hits upon the idea of standing behind the green, muscular upper body of one of his "Hulk" sculptures, so that his own head sticks out behind the comic-book character's shoulders. In photos, Koons always looks like someone who is having a good time.

But without a stool or box or anything else to stand on, he disappears behind his own art. This seems to annoy him. But perhaps what really annoys him is the fact that his assistants haven't noticed the problem yet.

His searching glance and a few whispered words are enough to solve the problem. Koons is good at giving orders and making them sound like requests. After a minute or two -- which feels like an eternity -- someone brings some blocks of wood.

Koons has about 100 employees, who transform his ideas into digital templates on the computer. They are also the ones who transfer these designs onto canvases with brushes or turn them into sculptures. It's an enormous operation.

But his works always create the impression that art is uncomplicated, which is precisely what has made him one of the world's most famous artists. Now he wants to become even more famous.

He has two major exhibitions in Europe this summer. The first one began in Basel in May and is essentially a retrospective. A double exhibition containing more than 90 works began in Frankfurt on Wednesday. It's a huge production.

One part of the show takes place at the Schirn Kunsthalle exhibition center, a show of the American artist's works as a painter -- or at least as someone who has his staff produce impressive paintings. The other part is on display at the Liebieghaus, a museum for sculptures from antiquity to the 19th century. Koons was intrigued by the idea of showing his own sculptures at the museum. He likes to reduce his work to stimuli that provoke a certain reaction, and he also likes it when art historians amplify the impact of his works, which are basically all deliberately tasteless.

In Frankfurt, Koons is also exhibiting paintings and sculptures from his new series "Antiquity" for the first time. He has often found inspiration in the art of the past, specifically the Baroque and the Rococo periods. Now he has arrived in antiquity. And when he talks about Praxiteles, an important sculptor from the 4th century B.C., it sounds as if he were talking about a friend.

In the course of his own Renaissance, his rediscovery of antiquity, Koons has reinvented the figure of the discus thrower, for example. The body is classical, but the surface -- metallic and blue -- is not. As soon as the viewer moves, the light reflecting on the muscles changes. Koons likes that. It's so simple and yet so effective.

On canvas, Koons' playful approach to antiquity's myths and ideals of beauty takes the form of, for example, a scantily clad woman kissing an inflatable rubber monkey while sitting on an inflatable plastic dolphin. The oversized paintings in this series are photorealistic and yet oddly artificial, almost surreal.

On the day that SPIEGEL meets Koons in his New York studio, the paintings are still being created. Several people are working on many different canvases at the same time. Sometimes they paint for one or two years and still don't have enough time. Every brush stroke and every nuance has to be just right, and Koons has to like every single square millimeter of painted canvas.

From the beginning of his career Koons, now 57, was more interested in being a star than an artist. He has invested a lot of money in the charisma of his art, in ensuring that the workmanship is perfect, and in softly shimmering or extremely shiny surfaces. A porcelain figure in gold and white which depicts Michael Jackson with his chimpanzee Bubbles is an early classic from the 1980s. Critics often talk about certain artists having revived the supposedly dead art of painting. The genre of representational sculpture was even deader, if you will, but Koons saved it practically single-handedly.

In the early 1990s, he surprised the world with paintings and objects in the "Made in Heaven" series, a sort of autobiographical pornography. It wasn't the first time that he was the star in his own show, but this time he took off his clothes.

He and Cicciolina married and had a son, who they named Ludwig and introduced as their "biological sculpture." Then they got divorced and waged a long custody battle. But they are eternally inseparable in art history. Koons' global fame is based on the large number of pieces in the "Made in Heaven" series, all those depictions of kissing and copulation.

Each individual work in this series is meant to demonstrate that he can take on both his own early works and antiquity, and that he can make both look like new. The exhibition also shows that he still has the biggest ego in the art world, even an aesthetic über-ego. Most people with any interest in art are familiar with his works, which are almost as famous as paintings by Andy Warhol.

His favorite subjects are human DNA, the history of mankind and anything having to do with procreation -- the big picture. He calls it "the biological narrative." He doesn't believe in anything except the spread of genes, and that, despite the biology written into our being, we still have the freedom to decide who we are and what we want. Even his theories sound surreal.

Koons also says that every young artist develops his own iconography. In his case, he says, that process was like a car you try to start in cold weather: You keep trying, and eventually it starts.

The real spark came to Koons in art school, when a professor showed his students a picture of a nude by Edouard Manet, the legendary "Olympia." This icon of Impressionism, says Koons, made him realize that the depiction of nudity can contain all kinds of subjects: sociology, philosophy, theology and even physics, and much more.

Then he delivers another typical Koons remark: "Everything about me opened up, and I recognized that I could be part of something that's fantastic, absolutely fantastic."

The Iconography of Desire

The young artist decided to develop a new iconography of desire. Marcel Duchamp, the Dadaist, was an inspiration. The Venus of Willendorf, a small, 25,000-year-old ancient fertility figure, was another.

Koons himself exhibited brand-new vacuum cleaners, like the ones the housewives of his childhood desired, and he eventually portrayed Cicciolina, in an effort to portray the desires of the middle class. He has even interpreted the Venus of Willendorf in his own way, as an imposingly large "Balloon Venus" in colorful metal.

Based on auction prices, Koons is currently the most expensive living artist in the world. A few years ago, a giant sculpture called "Balloon Flower" sold for $25.8 million (€20.6 million). In being so successful, he also embodies the dream of the middle class. He has made it, and he has turned ambition into art.

One of Koons' most important promoters and collectors is the Greek Cypriot industrialist Dakis Joannou, who lives in Athens. Koons calls him a friend and designed his most recent yacht, giving it a very conspicuous paint job based on a camouflage pattern. The name of the boat, "Guilty," is part of Joannou's self-irony, says Koons, pointing out that the tycoon once named a yacht the "Donald Duck."

The entire "Antiquity" series is also a sign of Koons' reverence for himself, as well as for Greece and its ancient, advanced civilization. Koons loves Greece and likes to spend his summers there, although he won't be going this year, because his eighth child is about to be born.

He doesn't want to say much about the country and its current problems. Koons lives in the present, but even more so in the eternity of art. As a precaution, his sculptures are constructed in such a way that they'll still seem brand new in a few thousand years.

Twenty years ago, in his radiant "Made in Heaven" years, Koons created a 12-meter-high lap dog out of flowers and exhibited it in Arolsen, a town in the German state of Hesse. It became the art sensation of 1992. Some interpreted the event as an attempt to compete with the Documenta art show that was underway in the Hesse city of Kassel at the same time.

In 2012, Documenta, which takes place every five years, is on again in Kassel. And Koons is back in the region, with his exhibition in nearby Frankfurt.

Koons doesn't deny that he has thought about all of this. He says that he likes the idea that many people from the art world will be in Europe. First they'll go to the Documenta in Kassel, and then to Art Basel in the Swiss city of that name -- where Koons' other European show is currently on. For a fleeting moment, Koons seems to be smiling.