The controversial "Jew in the Box" exhibit at the Jewish Museum in Berlin, in which a Jewish person was featured in an open box, ready to answer questions, closed on Sunday as one of the institution's most visited exhibitions ever, with more than 53,000 visitors.

On Saturday evening I was the Jew in the box. There were a lot of people, mostly Germans, who came by to ask me questions about being kosher (which I used to be) right up to what religious services are like (usually very long). Most wanted to know what it is like to be Jewish in Germany. Sometimes difficult, I said, but more on that in a bit.

While many of my visitors were grateful for the opportunity to meet a real Jew, some in the Jewish community were not so enthusiastic about the exhibit. Stephan Kramer, the general secretary of the Central Council of Jews in Germany, said the box reminded him of the glass booth that housed Adolf Eichmann during his 1961 war crimes trial in Israel that led to his execution.

"Why don't they give him a banana and a glass of water, turn up the heat and make the Jew feel really cozy in his glass box?" Kramer told the Associated Press after the exhibit opened in the spring.

Despite the exhibition's popularity, Kramer stuck to his view.

"Even though the exhibition may have experienced a large number of visitors that doesn't make it more palatable," Kramer told SPIEGEL ONLINE. "My opinion hasn't changed."

I couldn't disagree more. To me the exhibit, which was part of a larger exhibition known as "The Whole Truth," was a great idea. I've lived on and off in Germany since 1987 and have often felt like a museum exhibit myself.

I have almost without exception been the first Jewish person that any of my German friends and acquaintances have met. This was true when I lived between 1987 and 1992 in Frankfurt and even more so when I met many people from former East Germany after I moved to Berlin in 1992.

And I'm talking about educated people -- people with university degrees and all sorts of titles. One time in Frankfurt I had someone ask me if I go to the Jewish church on a regular basis.

No, I said. But I do attend the synagogue occasionally.

I was once laid up in a hospital in the Friedrichshain neighborhood of former East Berlin with a badly broken leg after being hit by a car while cycling. While I marveled at the German health care system -- which kept me in the hospital for nearly two weeks -- I cringed at the food.

I patiently explained to the kitchen ladies that I don't eat pork. But they continued to offer me things like boulette and schnitzel. It quickly became clear that they never thought about the pork content because they had never encountered anyone who wouldn't eat it. I gave up and told them to give me vegetarian meals. It was just easier that way.

The ignorance was particularly shocking to me because having been born and raised in the New York metropolitan area, my perspective is skewed. Everyone I met knew something about being Jewish. My high school was a third Jewish, a third Italian and a third African-American. School was closed for Rosh Hashanah, the Jewish New Year, and for Yom Kippour, the holiest day in the Jewish calendar.

Obviously Germany is different, but I don't blame Germans for their ignorance. Despite all the hype about the rebirth of Jewish communities in Germany and the influx of Israelis to Berlin, Germany is a country that is home to a miniscule population of Jews.

Officially, there are about 120,000 in the country and nearly 10,300 living in Berlin, the largest Jewish community.

But for me, an American Jewish gal, that's in part because of the way religion is organized here. People living in Germany register their religion with the government and the religious communities are supported by a church tax.

In the States you join a synagogue. Not happy with the rabbi? Think the cantor can't sing? Disgusted by the board of directors? You cancel your membership and look elsewhere.

Not possible in Germany. The unified community controls the purse strings. Many Jews either just don't want to pay the tax, or they don't want their money going to a unified organization. That's especially true in Berlin's case, where the official Jewish community is dysfunctional at best. Things have gotten so bad in Berlin that earlier this year Jewish community members physically attacked each other at a meeting. In short, you'd have to be more than meschuggeneh to want to be a member there.

And finally, from my American perspective, there is something creepy about having to tell the government which religion you practice. But okay -- it's a different tradition and I should accept that.

Still, even with all these reasons for Jews not to join the official community, if you take together the number of officially registered Jews in Germany with estimates of those who aren't, you have maybe 200,000 Jews in the country at best -- from a total of 82 million people living in Germany -- a fraction of the population.

In Berlin, it is difficult to get figures on the unofficial Jewish population, but it is probably safe to say it is significantly less than 1 percent of the total population of 3.5 million. Heck, Portland, Oregon, where I last lived in the States, is hardly a bastion of Judaism, but there are roughly 47,500 Jews in a city of 594,000. That means Jews are nearly 8 percent of the population in Portland.

In short, how are you supposed to meet a Jew when there are hardly any around?

Berlin rabbi Yehuda Teichtal recently told the Daily Mail that Germans who want to know something about Judaism should visit the community's educational center. "Here Jews will be happy to answer questions without sitting in a glass box," he told the British paper.

Maybe so, but for the most part Jewish communities in Germany are not very open to non-Jews. And Germans, with their Holocaust guilt, are often too uncomfortable or afraid to visit a synagogue or Jewish institution.

Which is one reason I'm glad the Jewish Museum in Berlin put on this exhibit. Given Germany's history, I think it's important for Germans to know the basics about Judaism.

If there aren't many Jews around, meeting one in a box in a museum is better than not having any contact at all. 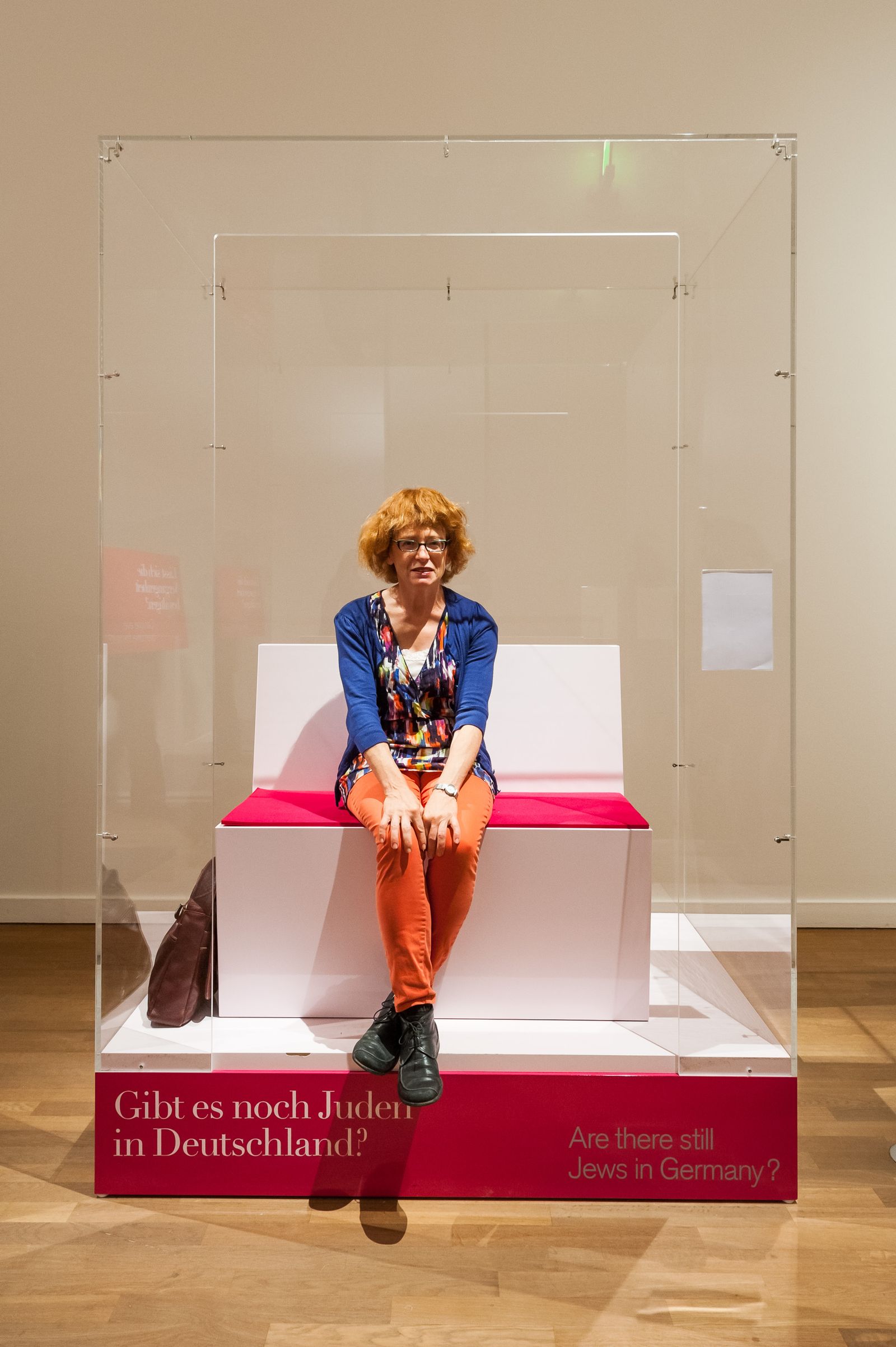 Journalist Miriam Widman: "If there aren't many Jews around, meeting one in a box in a museum is better than not having any contact."