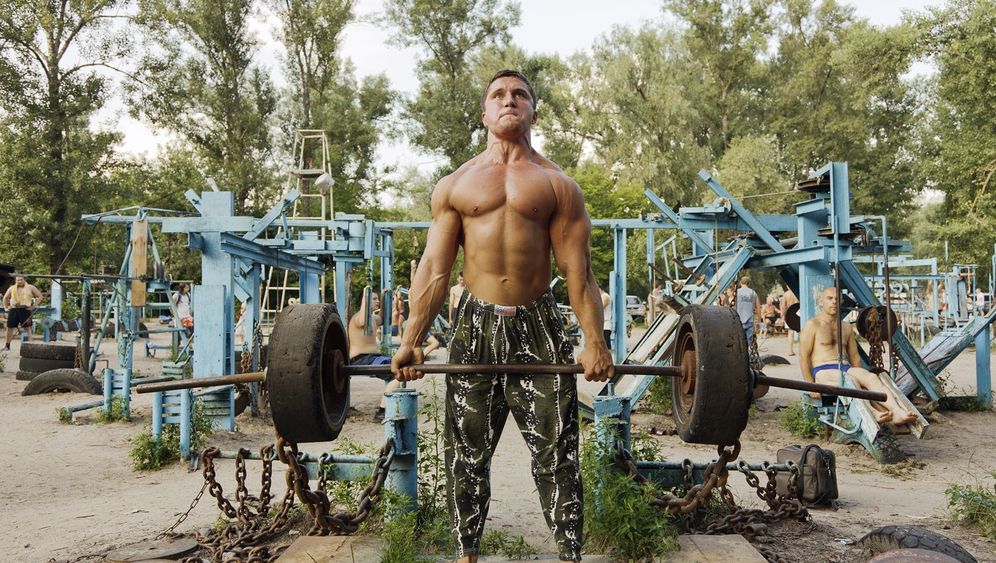 For many people, getting in shape entails heading to a members-only gym, complete with digital exercise machines and a luxurious sauna. But at a popular sports park in Kiev, things a far more hardcore.

In his latest photography book, Ukrainian photographer Kirill Golovchenko documents how people pump iron at a special place in his home country. "Kachalka: Muscle Beach" explores a Soviet-era open-air fitness area covering ten square kilometers (6.2 square miles) on the island of Tuhev in the heart of Ukraine's capital. There, entry has been free to anyone who wants to stay fit for the last 40 years.

The Ukrainian word Kachat means "to pump," and looking at the sunny images captured around the park's more than 200 weight-lifting stations, one can almost hear the sound of clinking weights, rep by rep. The unpadded benches, made simply of wood and painted blue, look more like medieval torture devices than benchpress stations.

It was here in the early 1970s that Polish gymnast Kasimir Jagelsky and mathematics professor Yuri Kuk realized their dream of creating a place for collective outdoor strength training. The fitness equipment is made from material that comes from a time when there was a surplus of scrap metal. Large vehicle parts serve as both weights and footbeds for rowing benches, and much of the equipment looks like it was salvaged from landfills and defunct factories.

One of the photos shows three men exerting themselves on a contraption made of various bars and and tractor tires, while another portrays a man wearing shorts and flip flops straining mightily to lift a piece of a tank chain into the air. It is a drama of biceps and triceps centered on the principles of tension and release.

Golovchenko, whose book has been published is in both German and English, gives these bodybuilders the attention they most likely crave, though one doesn't learn much more about them than their love of outdoor fitness. Fittingly, Golovchenko's hero from childhood, which the 38-year-old spent in Ukraine, was Arnold Schwarzenegger. But with his cliché-filled photos of these athletes, he captures a place that lies well beyond the world of sports media that worshipped the Austrian body builder.

In the prologue, which Golovchenko affectionately refers to as "the smallest workout," there is a picture of a blue and white towel embroidered with the words "Moscow Olympics 1980." Indeed, the sporting spirit of the former Soviet Union inevitably infuses many of the portraits. In one photo, a scrawny, elegantly dressed 85-year-old man trains his pecs using a pulley. The sailor, the mechanic, the armored unit -- much of that era's imagery doesn't seem far off.

In addition to highlighting the constructivist design of the fitness equipment, the book's layout recalls Russian revolutionary art, complete with agitprop typography. Finally, the book, published by Kehrer, brings back the long-forgotten 17 x 23 centimeter format that was popular in the 1980's.

Golovchenko's sweat-filled pictures could be interpreted as an ambitious portrait of Ukraine. The will of this nation, where the political order hovers somewhere between oligarchy and democracy, is clearly strong. After all, bodies can be political instruments too.