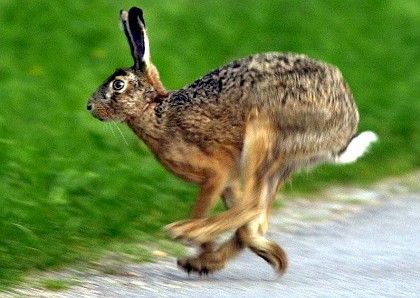 An elderly Austrian couple have been attacked by a "crazed hare."

Traditionally, rabbits and hares are better known as lovers, not fighters. On Monday, however, a hare in Linz, Austria broke the mold, attacking an elderly woman and her husband, not to mention the police officers who were called to the scene.

In a scene eerily reminiscent of the attack of the "most foul, cruel, and bad tempered" rabbit in the cult movie "Monty Python and the Quest for the Holy Grail," the Linz hare assaulted a 74-year-old woman who was hanging laundry in her garden early Monday morning. The animal, described as a "crazed hare" in a statement by Linz police department, bit the woman's foot, causing her to fall.

The unidentified woman, still under attack by the rampant hare, was eventually able to escape into her home, where her husband called the police before going outside to attempt to shoo the bunny away.

When police arrived on the scene, they found the 78-year-old man fighting the hare off with a stick -- and losing. Police asked the man to go inside. When the hare refused to give up the fight, the police were forced to shoot and kill the animal.

The police defended their apparent over-reaction by saying the hare could have fled if it had wanted to. "The animal always had the possibility of retreat because the garden was not closed off by a fence or other objects," they said in the statement.

The Red Cross transported the woman to a local hospital where she was treated for injuries to her ankle, and later released. Meanwhile the hare corpse has been sent to Vienna for official rabies testing, and results will be available within a few days, Linz police department spokesperson Alexander Niederwimmer told SPIEGEL ONLINE.

Niederwimmer doubts there will be complaints from animal protection agencies. "Definitely not," he said. "The hare had already bitten someone. Just imagine if there had been a small child playing in the yard."

Niederwimmer said the officers involved had declined to make official comments regarding the incident. "It was distressing enough for them to shoot the animal, even though it was dangerous," he said.