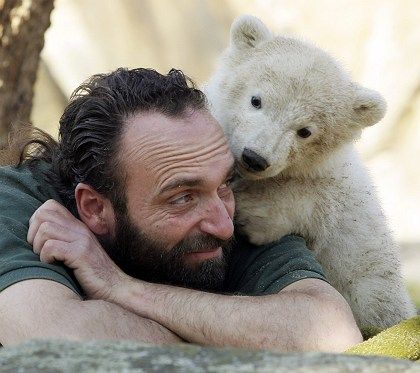 The man who looks after Knut around the clock says the celebrity cub can be so infuriating that he could hurl him against the wall sometimes.

Thomas Dörflein has been caring for Knut since the bear was born in December and rejected by his mother. He has a mattress next to the box where Knut sleeps on a sheepskin with his cuddly toy.

Dörflein said in a newspaper interview that he has often cursed the world-famous ball of fur. "I could throw him against the wall when everything comes together and he's shat all over his cage at three o'clock in the morning," he told the Frankfurter Rundschau newspaper.

"When he's shat on everything and then bites me because he's unsettled, it's enough to blow a fuse sometimes. But what can I do. He's a little baby and wants attention."

Dörflein said he tries to teach Knut manners when he becomes too aggressive because he is hungry or overtired. "I take him by the scruff of his neck and shake him a bit, then he's better. He feels all right again after that and tries to apologize by coming up very close and being peaceful and giving me that friendly look."

When Dörflein got a few days off before Easter, Knut pined for him. "He's a baby and will remain it for some time to come. It's a big wrench when the person he's got most contact with is suddenly gone. Bear babies usually spend two years or even longer with their mother, and that results in a close bond."

Dörflein said Knut regarded him as his father. "He has no other person to relate to, he has no alternative. Of course he sees me as that, that's why I'm the only one he sucks on. He simply has a need -- not just because he wants to drink milk, he needs warmth."

Dörflein said Knut is already capable of most things adult bears can do. "He started to be threatening at a very early stage. Creeping up from behind and pouncing on his prey, he likes to do that with us."

It's unclear for how much longer Knut will be needing Dörflein's 24-hour care. And at some stage, the bear will be so large that he will be dangerous to get close to, even for his dad. "As soon as bears are sexually mature at three or four years it becomes very dangerous. Then they just see you as their rival," said Dörflein.

Bearded and tall, Dörflein is a bit like a bear himself and has started to attract a female following, according to media reports. In Germany, he's almost as famous as Knut because the two are seen and photographed by thousands each day playing together in Berlin Zoo. Bad news, ladies: Dörflein is already spoken for.