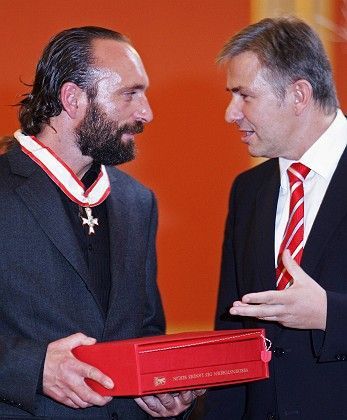 Knut's best friend, Berlin zookeeper Thomas Dörflein, was awarded the Medal of Merit of the city of Berlin on Monday for his tireless work hand-rearing the world-famous polar bear cub from a guinea pig-sized baby to the powerful young brute he is today.

Dörflein, 43, received the award from Berlin Mayor Klaus Wowereit "in appreciation of excellent services for the city of Berlin," the city said in a statement.

The bear-like bearded keeper lined up with 10 other recipients, among them former Berlin mayor Eberhard Diepgen, to receive the award in the city's town hall.

Dörflein spent day and night caring for Knut after the cub's mother Tosca rejected him at birth. He slept by Knut's side, fed him specially made porridge, cleaned up his mess and tolerated the cub's frequent temper tantrums in the middle of the night.

The keeper, who has worked for Berlin Zoo for the last 26 years, became a celebrity himself through his daily appearances with Knut in the months after the shaggy youngster was first shown to an adoring public in March.

The way the two played together delighted the hundreds of thousands of visitors who flocked to the zoo, where Dörflein would toss the cub in the air, drag him around on a blanket and play football with him. The strong bond between them was evident in the way Knut followed him around like a puppy and sucked on his hand.

The zoo has tried to wean Knut off Dörflein gradually to prepare the increasingly large bear -- now well over 80 kilograms (176 pounds) -- for the day when he will be too big and dangerous to approach. Knut now has an enclosure all to himself and spends all day there without Dörflein.

But for now, the two pals still play together in the mornings before the zoo opens.