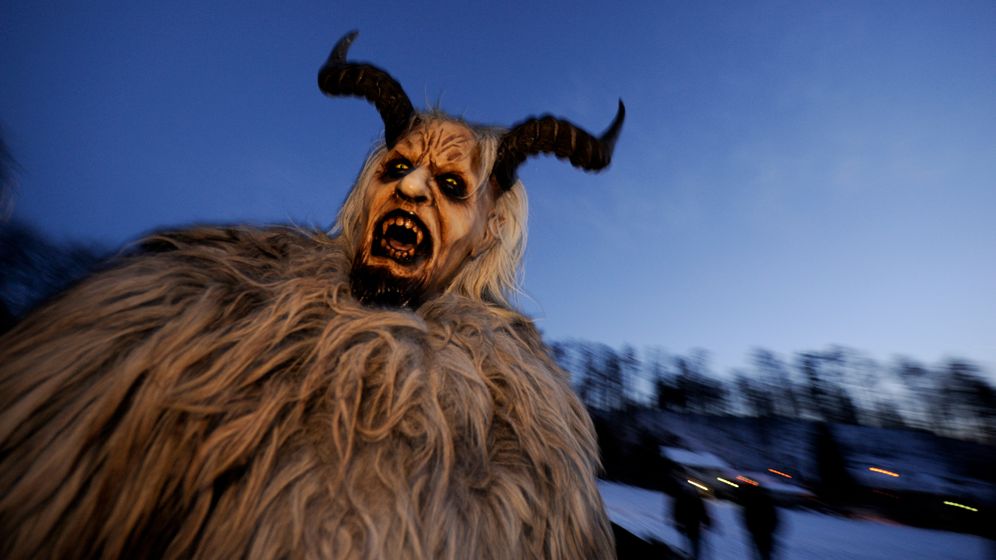 With its bright-red eyes, green cheeks, oddly crooked nose and rows of white teeth, the monster carved out of wood looks like it should be on a Native American totem pole or a mask from Papua New Guinea. But the blonde Heidi-style braids attached to the mask made of Swiss pine betray a different origin. The image of the mask wasn't captured in an exotic, far-off place, but the picturesque Swiss valley of Lötschental.

"When you discover something like this practically at your doorstep, it is fantastic," says photographer Carsten Peter. "I travel a lot, and that sharpens the sense for such things."

Peter's photography book, "Alpendämonen," or "Demons of the Alps," explores 20 different such wintertime traditions from the Alps that include gruesome masks, costumed processions and pagan rites. The at times terrifying figures often go by different names, but are most commonly known as Krampus or Perchten, who serve as helpers to Saint Nicholaus. They threaten to punish or even kidnap naughty children when he visits on the evening of Dec. 5, ahead of the Feast of St. Nicholas the following day.

Other monsters are the symbolic expression of driving out winter and its demons to herald warmer seasons to come, and their costumes and processions vary between regions. In the largely German-speaking northern Italian region of South Tyrol, for example, residents of a town stage the Wudeljagd, or "Wudel Hunt," whereby dragon-like figures called Schnappviecher, or "snapping animals," are slaughtered by men in butcher's outfits during a procession. The butchers represent spring, which triumphs over winter.

Research for the book took four years, and Peter attended some of the events more than once before he was satisfied with his images. "It was very difficult photographically," he says. "One had to be very close, travel great distances -- and much of it happens at night without good lighting." But it is precisely the motion blurring and spooky atmosphere that illuminates the sheer oddity of his subjects. Peter's goal was to make them look "as exotic as possible," and achieve a "foreign look at my own culture."

'They Pounced On Me'

In many of the photos, he succeeds. In one image snapped in southern Germany's Allgäu region, where the demonic figures are called Klausen, one man's sheepskin headgear evokes the costumes used by the Ku Klux Klan in the United States. In another, Death tromps around with a drum and his helper with a shrunken head near the Untersberg mountain between Germany's Berchtesgaden Alps and Salzburg, Austria. This particular photo looks more like an African voodoo ritual than an Austrian Advent tradition.

Peter, who comes from southern Bavaria, near where many of these winter traditions take place, says that despite their close proximity, many of these rituals are still shrouded in an aura of mystery. "They have their own world with their own terms, which makes it difficult for an outsider to get inside," he explains.

But other challenges in researching the book included the possibility of falling victim to his mischievous subjects. The wild straw-covered Buttnmandl demons of the Berchtesgaden region, for instance, didn't pass up the chance to give him a proper thrashing. "They pounced on me and during the attack parts of my camera lens were broken," he says.

Indeed, the project turned out to be a test of resolve for Peters, who specializes in spectacular outdoor adventures and nature photos. On one occasion, masked figures climbing around buildings in the Salzburg region dumped snow on him from a roof. On still others, a joker in a Habergoass goat costume stole his hat and witches played practical jokes on him.

"The more one looks at these traditions, the more strange it all seems," Peter says.