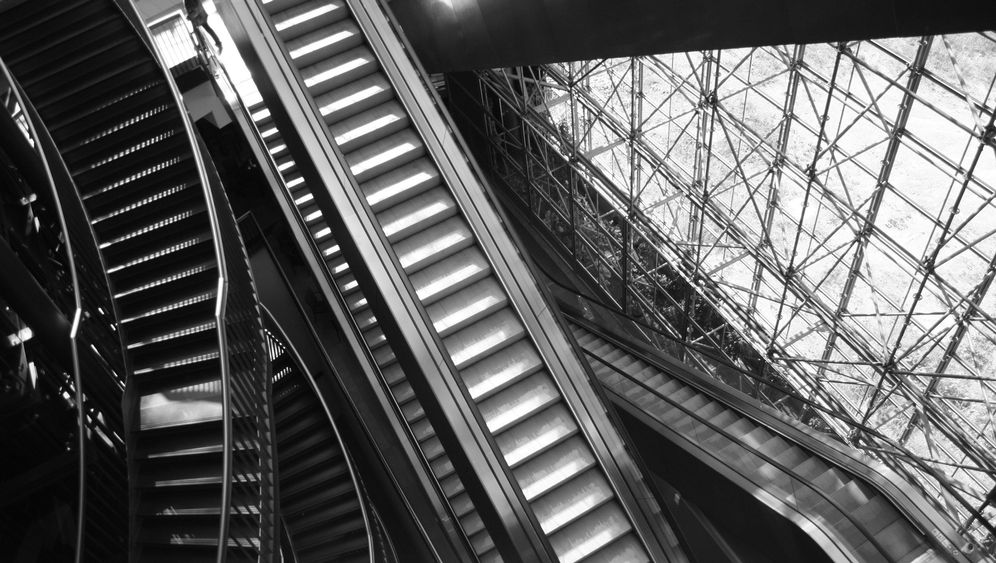 The old book covers in the antique store window don't do it for me. Maybe I'll just snap a shot of the mailbox right in front of the shop. It's symbolic -- letters unwritten, books unread. Profound? Or maybe not. I'd much rather photograph St. Nicolas Church right behind me, given all of its historical associations with the pro-democracy "Monday demonstrations" of 1989, and how cool the dawn light looks on it right now. But unfortunately I'm not allowed to.

I find my breakthrough a little way down with an inconspicuous nameplate on a door in a shopping arcade. There are two mailboxes there with a sticker saying "No Ads, Please," but neither of them bears a name. Bingo. Category number two is "unwritten and unread." Check that one off the list.

My hunt for the perfect snapshot is part of the Leipzig Photo Marathon. I, along with all the other competitors, have 10 hours, between 8 a.m. and 6 p.m., to find and take great photos of the city. At the day's end I have to submit exactly eight photos on a memory card -- in the correct thematic order, or else I'll be disqualified. This morning there were more than 200 amateur and professional photographers gathered at the public swimming pool building, where we all learned our first four tasks of the day.

We've got our work cut out for us. The competition's overarching theme is "Leipzig creative," and each of the tasks has something to do with a type of art that plays a role in the city. Standing on a stage, organizer Corwin von Kuhwede reads the themes aloud: "Architecture: Alert and Unfinished;" "Books and Print: Unwritten and Unread; "Music: Unheard of;" "Fashion: Stylishly Unworn;" and so on. That's a lot of un's. "What the hell is that?" groans one female participant. Another shrugs and says, "It's all about being there." Of course there's also the issue of the prizes, such as expensive lenses and an assortment of gift certificates.

In Search of the Right Shot

This is my first time in Leipzig, and I want to use the photo marathon to see what the city has to offer tourists. But how do you get to know a city when you're viewing it through the lens of a camera and the filter of a very particular task? My only aides are a guidebook and a smartphone I can use for city maps. I use them to scout out locations that are well suited to the various categories. For the music theme, for example, the guidebook suggests St. Thomas Church, where Johann Sebastian Bach led the choir for many years.

Standing in front of the church is a tour guide waiting for some customers. He's decked out in a Baroque-period attire, complete with a wig that matches the church's white walls. One tourist wants to know about the composer's love life. The guide has no answer, but directs the tourist to the Bach Museum. My mind darts to one of the photo categories: unheard of! I see it in the museum shop, which sells Bach's "Violin Concerto in A minor" printed on shirt ties, erasers and pot holders. All unheard.

On the square in front of the church, Charly, a Great Dane as big as a wolf, is sniffing around the flower pots and the other dogs. It's wearing a collar that says "Fusshupe" ("foot horn") -- one of those common cutesy names in Germany for very small dogs because you're always stepping on them, and they yelp in pain. "It's a joke!" says the dog's owner. Well, there you go: unheard of! I decide the dog will fit the bill for my shot for the third category. Everybody loves animals, and the picture of Charly the mammoth "foot horn" will undoubtedly win the jury's sympathy.

A Different Way to Discover a City

Of course, there are "unheard of" things everywhere I look. I start scanning my surroundings, looking only for things that fit with the category. It's an entirely different way to discover a city than the one used by flocks of Japanese tourists, visitors on double-decker buses and people zipping around on bike tours. Like the millions before them, they're just checking off one "must-see" item after the next. The contestants in the photo marathon, in contrast, are on the hunt for the kind of details that typically escape notice.

In fact, this newfangled type of urban touring is gaining popularity. Germany's three largest cities -- Berlin, Munich and Hamburg -- host regular photo marathons, and organizers in big cities across the world have been thinking up tricky tasks for photography enthusiasts for some time now. In the end, they show the results of their competitions in exhibitions spaces. This has happened in Toronto and Tbilisi, in Nice and Nairobi. Even Burma will be getting into the game soon.

This is also the first time that Leipzig has hosted a photo marathon. At noon, the organizers look happy with how things are going when they announce the four final tasks from a stand in the downtown area. "So far, we've actually only had positive feedback," says Maria Köhler, the press spokeswoman for the organizing team. Only a few participants have complained about how hard the tasks are, she adds.

During the afternoon, I treat myself to a little break. For a few euros, I buy a ticket for a typical touristy intermezzo, a concert by the world-famous boys' choir of St. Thomas Church. The church's pastor says: "While you are leaving, we would be very happy if you could participate in the motet … erm, I mean money collection." It's a shame you can't photograph tongue slips, because that one would have been perfect for category No. 7, "unintended and unskillful." Then I start to wonder if anything else in my photo haul so far will fit that bill. "Have no fear" sings the choir of boys in their angelic voices, and I snap out of my moment of self-doubt. Break's over. The competition is a "marathon," not a "sit-in-a-church-pew-athon."

In the end, though, things actually do get rather athletic, especially because time has been racing by so fast. For my last two shots, I find myself jogging back and forth between the downtown area and the trendy neighbourhood around Südplatz, between Auerbach's Cellar, the designer shop "Tschau Tschüssi" and the art museum.

By now, given all the miles I've logged walking around, I know almost every back alley of the city center. When it's finally time to hand in my memory card, I'm one of the last to do so. I've rushed all over Leipzig. And I can confidently say that it's a very beautiful city.