Hans-Dieter Udri, 70, is a little shy as he goes up to the man standing in the middle of the church, who has his hands in his pockets, a black hat on his head and a gas mask covering his face.

"Are you Stefan Strumbel?" asks Udri. Then he begins to talk of the past, when he was still a child, when everyone went to mass on Sundays, young or old. He is a Christian, and, speaking in his Alemannic German dialect, he insists that he is a believer. His gaze wanders up to the church roof. He hardly ever goes to mass anymore. 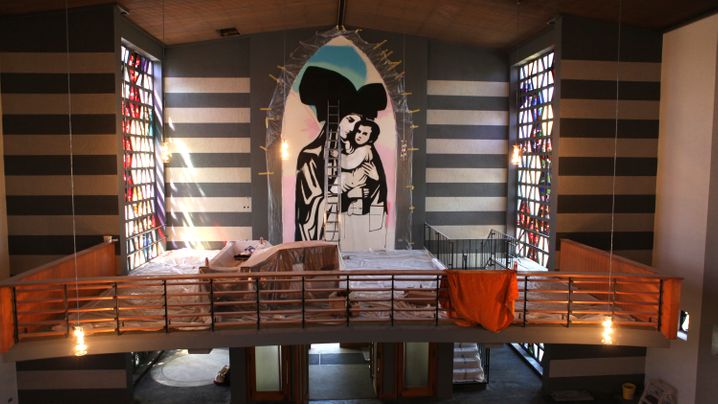 Udri is one of many Christians in the small town of Goldscheuer who had stayed away from the church for years. Yet he is also one of many who have regained their interest in their village church of late -- people who want to know just what Stumbel is up to here.

The cornerstone of the Mary, Help of Christians Church was laid 50 years ago. Udri was an altar boy when the church was dedicated. But it is remarkable that he can now enter the church this lunchtime at all. The door had been locked for years when there was no mass or other event taking place. But it is also remarkable because, in recent years, hardly anyone came even when the doors were open.

Of the approximately 2,200 inhabitants in Goldscheuer, 1,200 are Catholics. On recent Sundays, however, less than 3 percent of the faithful were turning up at mass. Attendance had fallen so low that the archdiocese in Freiburg considered closing the church.

Hundreds of Catholic churches will be threatened by a similar fate over the next few years in Germany as increasing numbers of worshippers stay away, and as the popularity of going to mass falls steadily, even amongst the faithful.

It was not looking good for the village church of Goldscheuer. It was dilapidated, its façade dreary. The interior walls were partially blackened by the heaters placed in front of them. What would be the point of investing in a building that was barely used anymore?

But now the mood is more about looking forward than backward. The church is not only still there, but it will soon be attracting people to come to Goldscheuer specifically to visit it. That says a lot about the place, and even more about the relationship of many Christians to the Church.

When Father Thomas Braunstein, 47, took over as parish priest in Goldscheuer, it was a time of trepidation for him. The archdiocese had tied the survival of the church to conditions: Donations were needed to finance part of the renovation.

It was a difficult time for people like Hannah Schäfer, 63, a member of the parish council for 30 years. Schäfer's mother had made the cover for the altar and the altar boys' vestments. "Our parents made great sacrifices," she says. "They also collected money so that the church could be built." For Schäfer and other parish councilors, it was not just a matter of maintaining a church -- it was also about saving what their parents had created.

They went door to door, meeting people like Hans-Dieter Udri, who despite their reservations could not imagine the village without a church. They met people who still hold the church dear.

An Anchor for the Community

Father Braunstein also went out collecting. He paid visits to businessmen, some of whom had left the church. He marveled at their willingness to give money. The church, it seemed, remained an anchor for the community -- except hardly anyone entered it any more.

Now, the chances are good that the missing €30,000 can be raised through attracting outside visitors who would put money into the coffers. That is because of one man: Stefan Strumbel. The 32-year-old artist lives in nearby Offenburg. He is often referred to as a street artist because he started out by spraying walls and trains. Today, in his studio, he paints women in traditional Black Forest dress with weapons in their arms; he sketches cuckoo clocks with hand grenades next to the clock face and paints them in bright colors. His central theme is the very German concept of Heimat, which loosely translates as "home" or "native region." He makes tradition provocative, and demands his audience confront their own idea of what their Heimat is and what it means.

For Strumbel, provocation does have its limits, however. Because he also works with religious symbols, he sought out contact with Father Braunstein. The priest gave him theological advice, for example about whether it was acceptable to put a skull at the top of a crucifix. No, said Braunstein, Jesus conquered death, the skull had to go under the cross. Today the priest calls the artist "a gift from God."

'The Church Had an Indescribable Aura'

In actual fact, it is as if fate -- or some greater power -- brought two sides together in Goldscheuer who complement each other like two pieces of a puzzle: On the one hand, Strumbel with his art that challenges the concept of home, on the other, the believers who didn't go to church, who are now passionate for a building that was once home.

When Strumbel visited the church for the first time, he was practically disgusted by its outward dreariness. "The church looked like a gym," he says. But when he went inside, he quickly changed his mind: "Even when the church was gutted, it had an indescribable aura."

Anyone hearing Strumbel say that might have reason to doubt him: It was a mundane building inside as well; only the light flowing through the big windows and their colorful motifs helped to give the space something of a spiritual feeling.

'Maybe Some Will Find this Blasphemous'

Strumbel was bubbling over with ideas, and Father Braunstein realized the project could become much more than the mere restoration of a 1960s building. They agreed that Strumbel should create the entire new interior of the church.

Strumbel declined a fee. Of course he will benefit from the attention, as he says himself, because the longevity of art in a church is incomparable. But he talks even more about his social mission. "I want to create a feeling of security" is a phrase he often uses.

The place he imagined is now on display in the church. He has painted wide strips of dark grey and white on some walls. At the front of the room, a crucifixion scene made out of wood had been hanging over the altar; it is now on the ground. It will be mounted on the wall again, however, and a strip of LEDs in different colors will light it up.

'Every Inch Had to be Approved'

Speech bubbles painted white will hang on two walls by the entrance; candles will go underneath them. The light from the flames will shine on the speech bubbles, a symbol of the silent prayers of the faithful.

LED ribbons, funky stripes and comic-book elements in a Catholic church? That sounds like a minor revolution. But Strumbel met surprisingly little resistance from the archdiocese, even though, as he says, "every inch had to be approved."

The Goldscheuer parish council was far more skeptical, however. When Strumbel presented his plan, the councillors looked shocked. The only way to convince them was through the image for which the church will be most renowned in future: a 6-meter (20-foot) high Madonna holding the infant Jesus in her arms.

Strumbel is spraying the image on the wall above the gallery, which is above the entrance. It requires dozens of cans of paint, and Strumbel needs to wear a gas mask as he works; otherwise the concentration of paint in the air would be too much for him.

The Madonna by the entrance and the crucified Jesus by the altar sit facing each other; here the newborn in his mother's arms, there the adult being tortured to death.

In his Madonna picture, Strumbel combines the two meanings the church holds for the people of Goldscheuer, and probably for many Christians. In the image, Jesus' mother wears the traditional costume of the region around Goldscheuer. She combines the transcendent with the secular dimension of the church -- faith and home. "Maybe some will find this blasphemous, it is always going to be provocative," says Barbara Martin, an architect from the building authority at the Archdiocese of Freiburg.

A New Approach to Religion

In mid-March, Father Braunstein celebrated a service at what was then still a construction site. Some 170 people came to the mass, almost six times as many as usual. The village church had not seen so much life in a long time.

The priest will open the renovated building on July 1 with a service. Almost certainly, even more people will turn up, wanting to see their new church.

People like Hans-Dieter Udri, who likes what he sees. "After all, you have to think of those who will come here in 30 or 40 years' time."

Father Braunstein also believes that young people can find a new approach to religion through Strumbel's art. He counters any doubts with his approach to life: "I'm an optimist."

One thing is certain: Strumbel has started something with his art. "There are rumours that the older women want to get out their traditional costumes once again for the opening," he says.