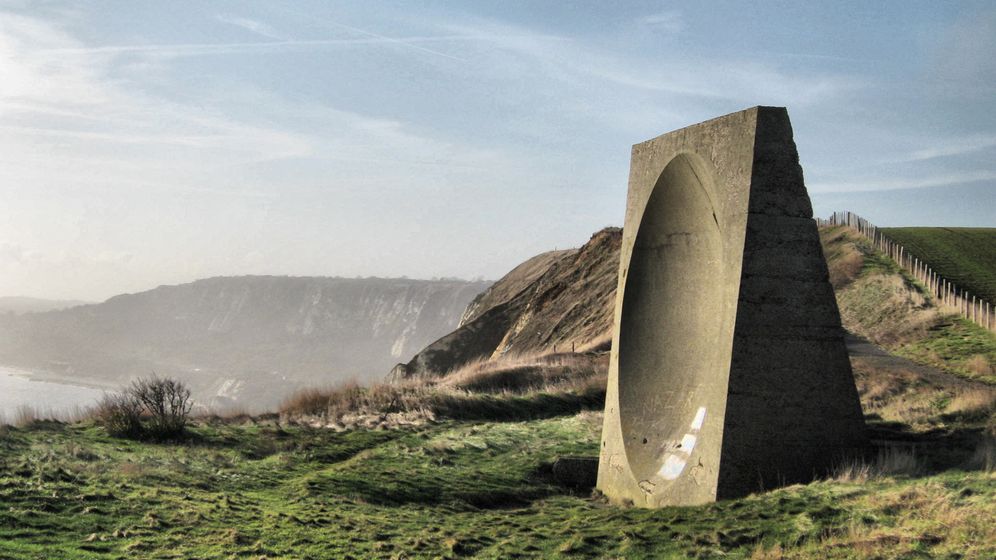 In the early summer of 1934, the rolling green hills of the county of Kent were no longer as contemplatively idyllic as they once were. For nearly 12 years, William Sansome Tucker had been coming to the lonely coastal area in the southeast of England to attend to his experiments -- but in those days of May, his role had changed into that of an event manager rather than a scientist. New visits were constantly being arranged, and the physicist was fully occupied organizing the arrival and departure of his guests.

They included senior officials from the Air Ministry as well as well-known scientific colleagues such as the Scotsman Robert Watson-Watt, all of whom wanted to see for themselves the progress being made in the field of acoustic detection. Above all, they wanted to see the imposing technology that had made it possible to track planes in the sky before they were detectible to the human ear or, astonishingly, even the eye.

The traumatic experiences suffered during World War I were all too fresh in British minds; memories of German bombers and airships dropping their destructive payloads over the country's cities. The lack of an effective air defense had been a major weakness for the UK during the war. Now the Nazis were in power in a newly-rejuvenated Germany, and nothing good could be expected of their expansionist plans. Should there be an attack on Britain, it would come, the military believed, from the skies. The detection and tracking of enemy aircraft was therefore a top priority.

A visit to the research facility near the Kent town of Hythe gave the senior officials a feeling that a solution could be close at hand. Particularly when they saw the mysterious early warning system, which had been manifested near pebble beaches in the form of monumental reinforced concrete shells. They were positioned along the coastline facing out into the English Channel like oversized ears.

Tucker called them "Sound Mirrors", and they were able to amplify the noise of engines on incoming aircraft by reflecting sound waves off their curved surfaces and concentrating them to a focal point, like rays of light in an optical lens. Based on the spot where the sound was loudest, calculations could be made to determine the direction of the plane.

Noise amplifiers using this principle had already been used in France and England during World War I in efforts to develop a means of locating enemy artillery. Among other things, parabolic mirrors were used which could be guided by a movable joint. From experiments it was known that for low frequencies, like the hum of aircraft engines, large surface-areas tended to be best.

In 1915, a British researcher had blasted a plate-like expanse five meters in diameter in the limestone cliffs on a headland south of the River Thames for just such a trial. Using a stethoscope as a kind of ear trumpet, he listened to the sounds being reflected. The horn was on a swivel mount and was connected to a pointer, which made it possible to calculate the bearing.

Although at that time no planes came close enough to be located, the functionality of the limestone mirror was nonetheless demonstrated later on: during the war, the British government commissioned a number of scientists into military service -- including physicist William Sansome Tucker, fresh from attaining his doctorate in 1915, who during a German attack on London in the spring of 1918 was part of the team operating the acoustic early warning station on the limestone cliffs of Kent.

Tucker remained in the Royal Engineers after the war and, in 1922, he took charge of acoustic research at the newly-established Air Defense Experimental Establishment. A search for a suitable location for future experiments led to the area around Hythe on the south coast of England -- not least because it was under the flight path of commercial aviation heading towards France, thereby providing sufficient test subjects.

It was there that, by the end of the 1920s, the scientists had erected a total of five concave mirrors made of steel and concrete, each 20 to 30 feet (six to nine meters) high and with different bowl depths. Tucker, however, wanted more. The 30-foot mirrors were very efficient for waves up to three feet, he found, but the sounds that interested them had lengths of 15 to 18 feet. That, in turn, meant that the mirror surface needed to be made 10 times larger.

When the sixth mirror was completed in 1930, it had surpassed all previous records in its dimensions: A curved wall 60 meters long and eight meters high. And it wasn't only the dimensions which were new, but also the type of listening device. In addition to conventional listening posts in front of the wall, Tucker used one of his earlier inventions, a power-operated hot-wire microphone. It worked as an indicator of sound waves: When the waves hit the heated wire, it cooled off, changing the electrical resistance and thus the strength of the electrical current which heated the wire up.

Tucker then installed microphones in concreted areas in front of the acoustic baffles, as well as switches and lights which were connected to the control room. Personnel were thus able to determine which microphone received the strongest signal, and give the listening post advice on where to look. The identified site in turn passed the position of the aircraft on to the control room once it had been calculated.

With a range of about 20 miles, the mega-mirror finally delivered the required results -- and at the Air Ministry, the plan matured into a huge project: a chain of 45 of the 60-meter sound mirrors supplemented by 60 of the nine-meter-high mirrors to be built along the coast from the county of Norfolk above the Thames estuary down to Dorset in the southwest of England, to make it impossible for enemy planes to approach the UK from the English Channel undetected.

In the summer of 1932, the Royal Air Force began training personnel in the use of the Hythe sound mirrors. Work on the stethoscope required extreme patience, endurance and concentration. In addition, it was necessary to train staff for the rapid and accurate communications required between the listening post, telephone operators and officers in the control room and at headquarters.

Tucker and his colleagues used annual military maneuvers to refine their instruments. The microphone system had to keep pace with the rapid development in aircraft technology, and it needed to be sensitive to different sounds and different engines. In addition, airplanes were becoming faster. Adding to the problems was increasingly troublesome background noise from urban development and road traffic, which even the idyllic Hythe was not spared.

By the end of January 1935, the greatest doubts seemed to have been dispelled. Top Royal Engineer officials ordered a detailed plan from Tucker for the necessary communications systems, mainly telephone lines and exchanges. By June of that year, the Air Ministry employed more than 500 people on the sound mirror project -- a figure that revealed the high priority of the early warning system.

But a letter from the Ministry in August abruptly brought the plans at the research station to a halt. Work was at first temporarily suspended until the end of September, upon which a further delay was implemented -- justified by the development of alternative detection methods.

In fact, by September 1935 the alternative had already been found. Scottish physicist Robert Watson-Watt had been experimenting with radio waves for years, and had recently used them for wireless communication with pilots. Now he could report further technical progress: By transmitting radio waves which were reflected back down to the ground station by the aircraft, a plane -- and thus a potential enemy -- could be located without any help from its crew. The new technique was dubbed Radio Detection and Ranging, or radar for short. It would eventually go on to play a significant role in the defense of Great Britain during World War II, and would become the fundamental component of every modern air defense. The concave mirror system had outlived its usefulness.

Tucker and his colleagues nonetheless continued their work at the Hythe research station until the end of the decade. It wasn't until 1939 that senior officers of the Royal Engineers decided to give up the sound mirror idea for good. The mirrors in existence were due to be destroyed. At the same time, Tucker had started his last year as director of the research center. He found it difficult to be separated from his scientific work, and he asked the War Department to extend his service -- but in vain.

In February 1940, his employment ended. But the plan to destroy the mirrors was never executed. Although one of the six-meter-tall sound mirrors at Hythe simply fell over during the 1980s, the rest have remained intact as bizarre relics of an almost-forgotten technology.