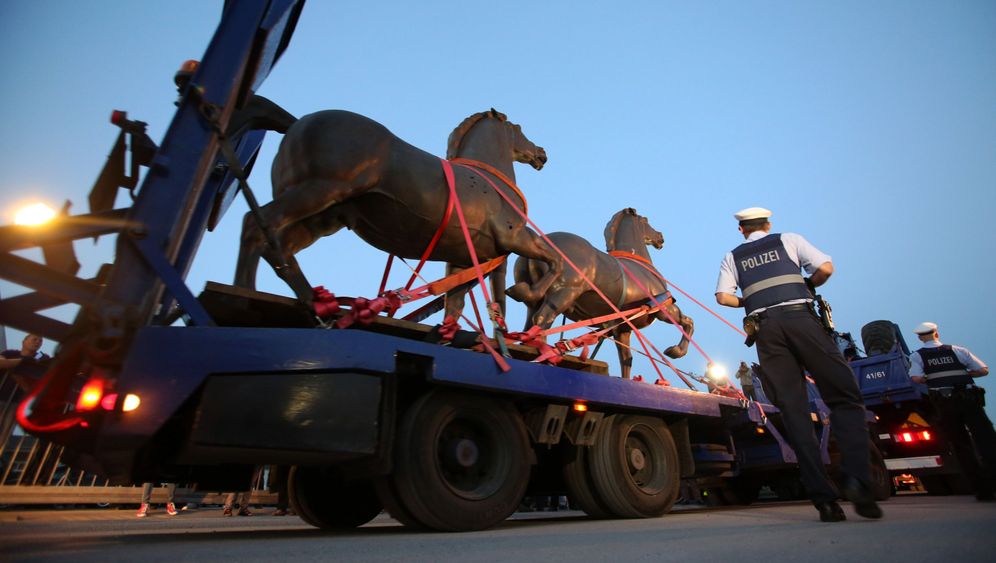 For decades, the bronze horses that once adorned Adolf Hitler's Reich Chancellery in Berlin had been missing. But on Wednesday, the Nazi works of art were finally discovered during a series of raids held across the country. SPIEGEL has learned that authorities were also able to recover a sculpture by Nazi-era artist Arno Breker called "The Wehrmacht," which flanked the grand entrance to Hitler's Chancellery.

The recoveries were made possible by a longtime informant helping Berlin state police investigators. SPIEGEL has learned that the woman was first offered the bronze horses, created by the Nazi-party sculptor Josef Thorak, for €3.1 million ($3.4 million) in September 2013 by a dubious art dealer. She immediately went to the police. She was subsequently approached three more times by dealers in Germany, most recently in January, 2015.

Berlin investigators worked closely together with the Dutch art detective Arthur Brand, from Amsterdam. In February, Brand established contact with a dealer in Antwerp, who offered him the bronze horses for €8 million. In consultation with the police, Brand posed as the representative of a fictitious collector from the US. Later, Brand was offered additional works of Nazi art, including the 40-ton Breker relief called "The Guardsman" ("Der Wächter").

"The Wehrmacht" was discovered during a Wednesday raid of a collector near Kiel. The work is one of Breker's most famous. It stood at the Chancellery's main entrance and has been missing since the end of World War II.

The collector confirmed to SPIEGEL that he had, in fact, been in possession of "The Wehrmacht." He says that the sculpture had been discovered by scrap traders and that he had purchased it from an art dealer "from East Germany." The sculpture does not bear Breker's signature, the collector told SPIEGEL, and had been badly damaged, before being reassembled later. But parts of it appear to be part of the original work of art, he said.