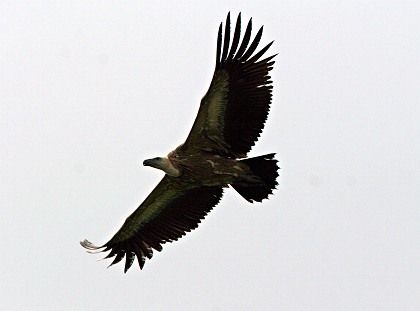 A griffon vulture cruising for carrion in the skies over Belgium this week.

It was a quick trip, but by Wednesday afternoon, most of the scores of gigantic vultures -- in Belgium and the Netherlands this week for a quick visit -- had headed back toward their homeland in Spain's Pyrenees Mountains. But the questions remained: Why would the griffons -- with wingspans of up to 2.8 meters (over 9 feet), among the largest birds on the European continent -- take a 1,000-kilometer trip from Spain to Flanders?

The birds first appeared on fields not far from the Belgian capital of Brussels early this week -- a handful of gigantic, brown-and-white vultures milling about near the edge of a forest. Curious locals assembled there to photograph them. Further sightings were made across Belgium and the Netherlands, leading to estimates of up to 140 carrion birds cruising over the Benelux region. On Tuesday, environmentalists in Flanders fed the flock pig carcasses to strengthen them for the flight home -- not, Jan Rodts of Flanders Bird Protection insisted to the Associated Press, for the pleasure of bird watchers.

Environmentalists say the birds first headed north due to a lack of food in Spain. And they pointed accusing fingers at the European Union. According to Dominique Verbeelen of the conservation group Natuurpunt, "The birds are looking for food." He told Flemish television: "In the past, Spanish farmers could leave their dead cattle out in the pastures, but this has been prohibited ever since mad-cow disease."

Perhaps. Confronted by the accusation, the European Commission pointed out that there are exceptions for Spanish farmers, but the farmers haven't shown much of an interest in helping the birds. Many complain that the population of griffon vultures has grown to some 20,000 and say the birds attack calves and baby sheep. To help the birds, vulture feeding stations -- illegal for years due to concerns over mad cow disease (BSE) -- have now been given the green light in Spain, provided the carrion has tested negative for BSE.

It's not the first time the vultures have headed northeast. Last year, bird watchers in Germany were treated to the sight of vultures soaring over the country. The birds cruise on thermal updrafts and are capable of spotting a carcass from an altitude of 3,000 meters.