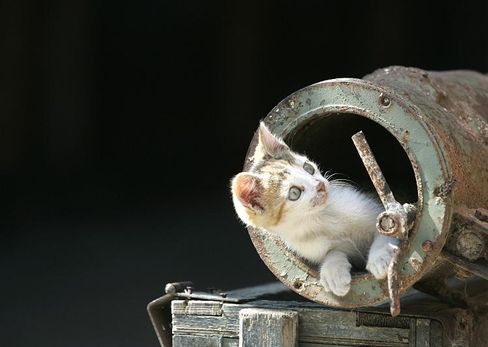 Bonny, a black cat with big green eyes, has survived a seven-week ordeal trapped under a bathtub after construction workers accidentally entombed her behind a wall of bathroom tiles in a neighbor's apartment in the northern town of Stadthagen.

The neighbor finally heard her desperate meowing and scratching while taking a shower and Bonny was discovered so emaciated that a vet wanted to put her to sleep, German newspapers reported.

Her weight had gone down from six kilos to two kilos and she is believed to have survived by lapping up water from a leaking pipe.

"Bonny was just fur and bones, she was totally emaciated -- she was like in a coma," her delighted owner Monika Hoppert, told the Schaumburger Nachrichten newspaper. Bonny could no longer hold up her head and kept falling over.

"I had to look after her like a baby at first, I fed and washed her. She got better each day and I hope she'll have fully recovered in a few weeks," said Hoppert.