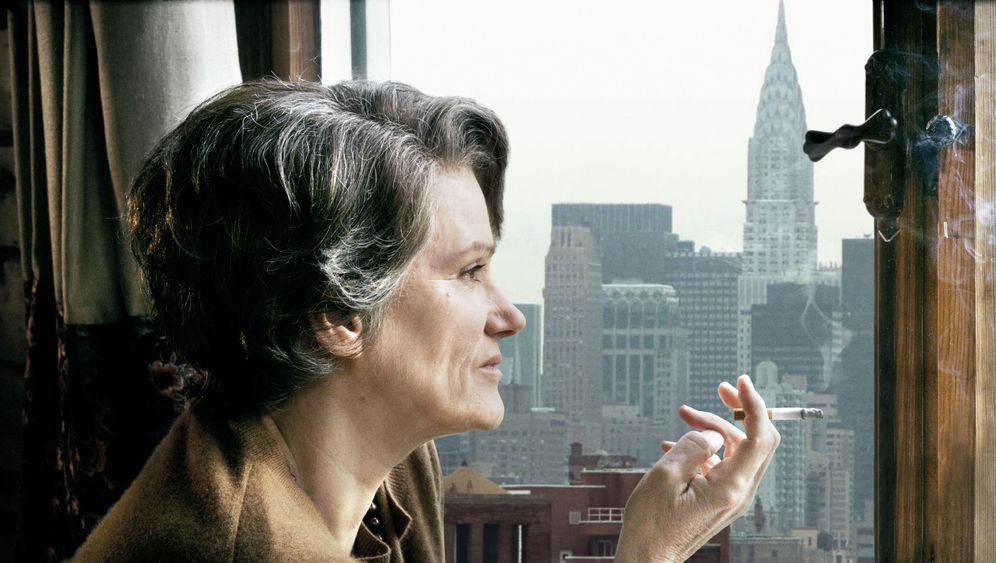 Photo Gallery: A Profile of a Strong Woman

Can men really be trusted? This classic question is the subject of the opening dialogue in director Margarethe von Trotta's new film "Hannah Arendt," which got its official release in Germany this week after screening at the Toronto International Film Festival and revolves around a less classic question: Was Adolf Eichmann, the organizer of the "final solution of the Jewish question," a monster or an efficient bureaucrat, a pathological creature or the embodiment of the banality of evil? Her theory of the "banality of evil" turned Arendt, a German Jew who became a college professor and distinguished author of philosophical works in the United States, into a controversial international figure in the early 1960s, more ostracized and hated than revered.

At the outset of the film, Arendt and her friend Mary McCarthy discuss the question of whether men, especially husbands, can actually be trusted. She hasn't faced the great conflict of her life yet. She is living with her own husband, Heinrich Blücher, in a large, comfortable apartment with a view of the Hudson River, where she often entertains close friends, like McCarthy, a famous author and critic, influential German-born philosopher Hans Jonas, and other so-called New York Intellectuals, the group of left-leaning writers who grew to international prominence at the time. Her circle includes a colorful assortment of German refugees from the Hitler regime, as well as American bohemians and academics: animated, passionately political and sophisticated. They smoke and drink and all speak at the same time, with the vitality of people who love the present all the more because they know that the worst is behind them.

Arendt trusts her husband because she doesn't want to be suspicious. He has been her companion for more than 20 years, since their time in Paris, the city to which she fled from an increasingly anti-Semitic Germany in 1933. She emigrated to the United States with him in 1941, spending the difficult first few years living in a two-room apartment with Blücher and her mother. And it's with him that she is engaged in an ongoing discussion of the things that concern her: the prospects of democracy, the temptation and horrors of totalitarian systems and the question of how modern man can lead a good and therefore meaningful life.

When Blücher, a professor at an out-of-town college, walks into the apartment after returning home from a night that he may not have spent alone, Arendt shouts: "I haven't slept all night!"

"Do we have talk about it right away?" he asks in response, as he hangs up his coat.

Why, yes, they must. The Israeli intelligence agency has abducted Eichmann from Argentina so that he can be put on trial in Jerusalem. One of Nazi Germany's greatest criminals is going to be called to account. Twelve years after the end of the Nuremberg Trials, the extermination of European Jews is moving toward the center of public consciousness in Israel for the first time and raising serious questions: How could it have happened? What exactly did happen? And what is a suitable punishment for a criminal who organized the murder of millions of people?

The film follows Arendt as she travels to Jerusalem to report on the trial for the New Yorker, which by then had already become America's most intellectually respected publication. She sees Eichmann sitting in a glass box intended to protect him against attacks from those attending the proceedings. She hears the horrific accounts of survivors, and she sees Chief Prosecutor Gideon Hausner "strutting around as if he had to compete with Eichmann for the lead role in a play." The staging of the trial irritates Arendt, and she feels manipulated. "Israel really has to be careful that the trial doesn't turn into a show trial," she says to an old friend, the Zionist Kurt Blumenfeld, who defends the undertaking, saying: "Our young people have refused to confront the 'dark times,' as you call them. Either they're ashamed of their parents for not having fought back or not having defended themselves, or they accuse them of not having behaved honorably … They believe that only criminals or prostitutes could survive the camps."

But Arendt isn't quick to buy into such ideas, instead choosing to delve into the issues herself. Instead, her guiding principle is, "I want to understant." She has traveled to Jerusalem to look a "monster" in the eye, but what she sees is a gaunt old bureaucrat who talks about orders and the discipline of the chain of command, who insists that he never physically harmed a Jew -- which is apparently true -- and who, in a confusing mixture of detailed factual testimony and moralistic statements about honor and oaths, eludes intuitive understanding.

One thing is clear: Eichmann is not insane. Categorizing him as pathological is not a means to understanding him. Besides, as Arendt will later write, he is also "not Iago and not Macbeth … Except for an extraordinary diligence in looking out for his personal advancement, he had no motives at all. And his diligence in itself was in no way criminal; he certainly would never have murdered his superior in order to inherit his post. He merely, to put the matter colloquially, never realized what he was doing."

According to her theory, Eichmann was literally thoughtless. Efficiency and obedience were his guiding principles, which replaced that inner conversation that we call conscience, that intangible space where human beings encounter themselves and responsibility arises. Arendt asked how political systems could have been created in which it is not the traditional notion of evil -- motivated by greed and vanity, revenge and envy -- but "sheer thoughtlessness" that brings the most horrific consequences.

What is the meaning of this "banality of evil," which requires no pathos, sadism or lunacy, which thrives in modern societies, with their extreme technical efficiency and sophisticated division of labor?

It doesn't take much to realize how explosive Arendt's thinking was. The philosopher Günther Anders, Arendt's first husband, applied it to the example of the pilots who bombed Hiroshima, and today it's most clearly evident when we think about the drones that are deployed by the push of a button by someone far away: Who is responsible when people are killed?

Wondrously, director Von Trotta has managed to make a very good film about these questions, which are both dramatic and challenging.

Her methods are as convincing as they are simple. The Eichmann scenes are inserted into the film as original documents, leaving the historical impact of reality untouched. Barbara Sukowa is brilliant as Arendt, a philosopher who embodied self-assurance and the capacity for love, the implacability of thought and the deep need for friendship in equal measure. The choice of an actress who bears no physical resemblance whatsoever to Arendt proves to be a godsend, because it eliminates any empathy kitsch from the start. The short scenes with actors who closely resemble the young Arendt (Friederike Becht) and the philosopher Martin Heidegger (Klaus Pohl), her professor and, for a time, her lover in the German university town of Marburg, confirm this to the most painful of degrees.

Trotta has made an extremely vivid cinematic essay, thrilling in its every minute, deeply moving in its seriousness and suitably unsettling. The scruples that usually accompany such a project are nowhere to be seen. Instead, with the exception of the odd invention of a scene in which Arendt is stalked by Israeli intelligence, they have led to ideal cinematic decisions.

The outstanding book that accompanies the film, "Hannah Arendt: Her Ideas Changed the World," which has just been published in German, mentions the Sassen tapes -- recordings of conversations between Willem Sassen, a Dutch Nazi and journalist, and Eichmann in Argentina. The tapes clearly show that Eichmann was an ardent anti-Semite, incapable of the direct use of force, and yet determined to exterminate the Jewish people. His performance in Jerusalem was a successful deception.

Oddly enough, Arendt didn't think that was possible. She believed what he said, meaning that, in a sense, she trusted him. Her theory of the "banality of evil" is based on a misunderstood, isolated incident. This doesn't change the fact that she transformed the way we think about responsibility and crime, because none of her reflections on this subject ever become irrelevant. Margarethe von Trotta's film spells this out in an unsettling way.