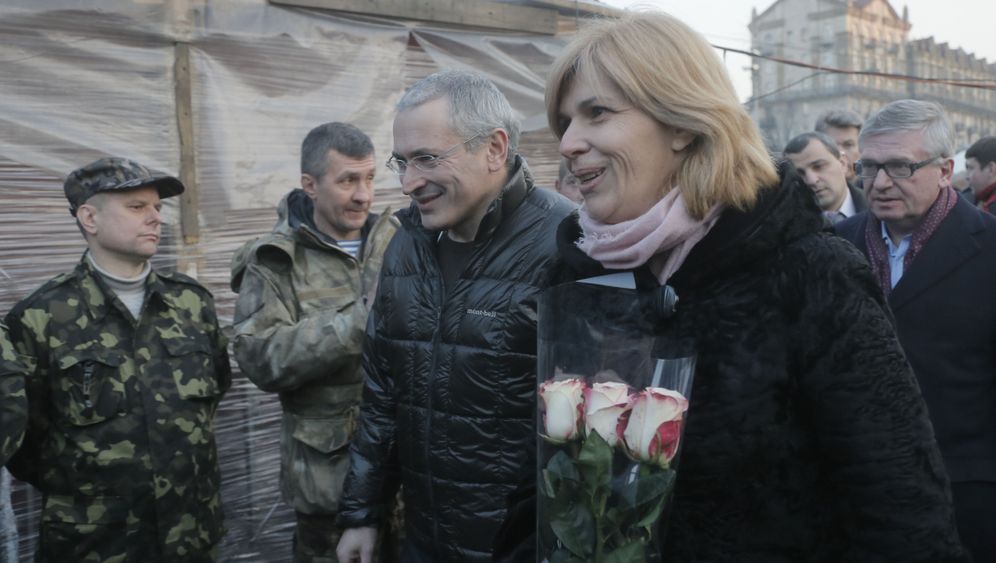 Photo Gallery: The Mother Theresa of the Maidan

There is a stack of paper on the conference table in her office. It consists of hundreds of flyers and an equal number of declarations of sympathy for Olga Bogomolets, collected by her friends on Maidan Square. The flyers depict her wearing a doctor's white coat, her blonde hair in a bob hairstyle, along with the words: I believe in Olga Bogomolets.

She is about to begin talking about Ukraine's future, about what happens after the Crimean crisis and where the country is headed. The 48-year-old has invited friends "from civil society," as she says, to attend the discussion. But the event on this afternoon is really about Bogomolets and the stack of papers on the table in front of her.

"You know that I have no money for a presidential election campaign," she says. That's her problem, but it's also her biggest trump card, and the reason why the group of people now sitting in front of her want to elect Bogomolets and no one else to the country's highest office. She smiles and says nothing for a moment. She loves this innocent pose, just like the one in which she is depicted on thousands of flyers, looking blissful, almost otherworldly.

Bogomolets is a dermatologist who specializes in the laser treatment of tumors. She comes from a medical dynasty of sorts. Her parents and grandparents were also physicians. She is considered an expert in the early skin cancer detection and she has been involved in providing healthcare to orphans for years. Bogomolets is the successful owner of the top dermatology and cosmetic surgery clinic in Kiev. She treats the beautiful and the powerful, including lawmakers and a former president. Still, Bogomolets isn't wealthy.

Before the meeting in her office, she was on Maidan Square, where she gave a speech next to the burned-out trade union building. She preached against corruption and was sharply critical of the current government and the diabolic interplay between power and money.

"Everyone who is in power today," she said, "must know that Maidan will not dissipate until Ukraine's powers that be allow justice to prevail. We need money, and we need power. But when money is used to acquire power, it's corruption. And when power is used to acquire money, it's injustice."

Thousands of people have come to hear her speech on this Sunday, and while she speaks, her friends collect the flyers. It will end up being 14,000 flyers, or 14,000 supporters for Bogomolets. It's a success for her, but more importantly, it's a measure of the disappointment that has taken hold on Maidan Square, five weeks after the revolution's greatest success, the end of the kleptocratic rule of former President Viktor Yanukovich.

The protesters risked their lives, driven by the yearning for a new spirit in Ukraine, and for new, fresh faces in the government. But under Arseniy Yatsenyuk, the new prime minister and former opposition leader, as well as other familiar old faces in Ukrainian politics, there has been no significant change to date. That's why many people on Maidan Square feel as if this revolution were nothing but a giant fraud, as if the country's new leaders had always been in power. The mood turned against the government once and for all when the Crimean crisis erupted.

Ukraine's parliament, the Verkhovna Rada, which is located only a few hundred meters from Maidan Square and which adopted a strict policy of solidarity in the first weeks of the new transitional government, became a tribunal during the last week. Lawmakers argued that the interim government has failed and that it has spent much too long waiting for help from the West. Resignations were demanded, and in the end Defense Minister Ihor Tenyukh had to step down, because he reacted so helplessly to Russia's annexation of Crimea and didn't seem to know what to do with his soldiers. He was replaced by Colonel General Mykhailo Koval, who, though a professional, is hardly likely to appease those critics longing for fresh, new faces.

Bogomolets has spent much of her time since the Maidan protests began last November outside in the cold, wearing a thick parka. She is married to a well-known Kiev attorney, her second marriage, and has four children.

During the unrest, Bogomolets organized medical care for wounded demonstrators. She stood in the way of police officers who were trying to arrest wounded protesters in hospitals. She also coordinated care on Feb. 20, the most violent day in Kiev, when hundreds of protesters were injured and more than 60 died.

During that time, she stood in the lobby of the Hotel Ukraine, which had been converted into a makeshift hospital. People died in her arms while snipers shot at protesters from the hotel roof.

Bogomolets has been a hero to the protesters on Maidan Square since then. They call her the "white angel," and some even call her Ukraine's Mother Theresa, the saint of their revolution. When Yatsenyuk assembled his interim cabinet, Bogomolets was on his shortlist. She was to be given a position just like Dmitry Bulatov, the leader of the AutoMaidan movement, who was kidnapped and likely tortured, and is currently Ukraine's minister of sports. Another member of the protest movement, Andriy Parubiy, the leader of the anti-government protests on Maidan Square, now heads the National Security and Defense Council of Ukraine. In the case of Bogomolets, appointing her to the position of health minister seemed to make sense.

She remembers receiving a phone call from Yatsenyuk's advisers, who asked if she was interested in the cabinet post. But instead of simply accepting the office, she wanted to set conditions so that things would truly change under the new government. She demanded international standards for the ministry, transparency in the billing of healthcare services and a new team. The advisers listened to what she had to say. They said nothing in reply, but on the next day they spread the rumor that she had turned down the job.

It was a lie, one of the usual political lies. For Bogomolets, it was an unmistakable sign that the old forces, the oligarchs and corrupt politicians, had already gained a foothold in the new government before any new policies had even been implemented.

'All They Wanted Was My Face'

She says she could have defended herself by telling the Maidan protesters about the advisers' deceptive behavior, thereby fomenting opposition to the new government. But she chose not to because, despite everything, she wanted to give the new beginning a chance to take hold. But also because she was no longer interested in being a part of the government.

"All they wanted was my face, but they weren't interested in real reforms," she says. Officially, she said that she had consulted with her priest, who had advised her to accept the post, but then she changed her mind. "My heart, sensitive to hypocrisy and farce, tells me it would be wrong to belong to the new goverment of politicians whom I hardly know," she recently told the Daily Beast website.

It was probably the right decision, now that the new government is increasingly being discredited. Voters now know that Bogomolets is not seeking office at any price, and that she has principles and refuses to frivolously abandon them. She could probably easily win the vote to enter into city hall, but she hasn't decided yet what she wants to do. Does she want to become mayor or perhaps a member of the Rada? Or would she rather run for the country's highest office and become Ukraine's first woman president?

"The real problem," she says, "is that we still aren't a self-sufficient country. We still seek support. We don't believe enough in ourselves. That makes us susceptible to Russian propaganda, especially now."

In the spring of 2014, Ukraine is an anxious country. Suddenly almost anything is possible, which also means that there is almost nothing to rely on. Sometimes all it takes is a few words to create new fronts and ignite the next conflict. Bogomolets herself was questioning many things until recently, even voicing the suspicion that the regime's snipers may not have been responsible for the deaths on Maidan Square.

Her suspicions became public when, in early March, a recording of an intercepted telephone conversation between Estonian Foreign Minister Urmas Paet and EU foreign policy chief Catherine Ashton was posted on the Internet -- by the Russians. In the conversation, Paet said that Bogomolets questioned whether former President Yanukovich was responsible for the massacre. "There is now stronger and stronger understanding that behind the snipers it was not Yanukovich, it was somebody from the new coalition," Paet said in remarks later confirmed by the Estonian Foreign Ministry. "Olga told that, well, all the evidence shows that people who were killed by snipers from both sides, among policemen and people from the streets, that they were the same snipers killing people from both sides."

After the leak, Bogomolets' mobile phone began ringing incessantly. The Maidan protesters saw their revolution being called into question. In an interview with Britain's Telegraph newspaper, Bogomolets distanced herself from Paets' remarks, insisting that she hadn't said what he had reported, and demanded that the new government investigate the incidents.

On Thursday, Ukraine's interim interior minister, Arsen Avakov, released a report claiming that ousted President Viktor Yanukovych and Russian security agents had been involved in the planning that resulted in the deadly use of force last month. But it presented no proof.

So far, the democracy Olga Bogomolets would like to see in Ukraine hasn't been born yet.