It feels a little eerie, this bike. The electric motor -- barely audible -- hums along, providing a little boost to each pedal stroke and simulating the feeling of riding downhill even when the rider is traveling uphill. Riding the Kalkhoff Pro Connect S model, a cyclist in average shape can reach speeds of about 40 kilometers per hour (25 miles per hour) on flat ground -- that's roughly the average speed of cyclists in the Tour de France -- without over exerting themselves at all. The manufacturer refers to this effect as an "integrated tailwind."

The Pro Connect is a hybrid vehicle with an electric motor installed in the pedal drive. As the rider increases pressure on the pedals, the motor delivers additional power. And this principle, called "pedelec," is currently electrifying the entire cycle manufacturing industry.

In Germany, about 20 manufacturers currently sell bicycles with additional electric motors. And they see themselves at the forefront of a potentially explosive market trend, the likes of which the bicycle industry has not experienced since the boom in mountain bikes in the early 1990s.

"The electric bike will be a standard product, not a short-term trend," predicts Mathias Seidler, the CEO of Derby Cycle in Cloppenburg, northeast Germany, which leads the German market with brands like Kalkhoff, Rixe and Focus. Roughly 100,000 pedelec models were sold in Germany last year and Seidler estimates that sales will increase fivefold in the next three to five -- which would bring the German market closer to the Dutch market for electric bikes.

In the Netherlands today, one in ten new bicycles sold is electric. The electric assistance is the Dutch cyclist's secret weapon against the wind in that country, which is, for some strange and unknown reason, never a tailwind.

Still the exception in automobile manufacturing, the electric motor is now entering the mainstream via the bicycle market. Unlike the auto industry, which has only managed to come up with highly priced compromises, the bicycle industry is blessed with precisely the opposite. Costs are relatively low while effect is significant. A rider must produce pedal power of about 100 watts to accelerate a conventional bicycle to a comfortable cruising speed of about 20 kilometers per hour (12.5 mph). The pedelec drive provides up to 250 watts in additional power, turning every cyclist into a superman, or woman.

The motor runs on relatively small batteries. Derby Cycle uses an electric motor made by Japanese system supplier, Panasonic, that weighs about six kilograms (13.2 lbs.). Its lithium ion (Li-ion) battery, located behind the main tube of the bike's frame, weighs 2.3 kg (5.1 lbs.) and takes up about as much space as a thick paperback book. The Li-ion battery pack has a charge of 260 watt-hours, which, according to the manufacturer, is enough to power the bike for a range of about 80 kilometers (50 miles).

However to achieve this, the bike must be ridden at moderate speeds. "Ranges fluctuate tremendously, depending on the rider profile," says Hannes Neupert, who runs ExtraEnergy, a non-profit organization, based in Tanna, in the German state of Thuringia, focussed on testing and gathering information on "light electric vehicles" -- the organization is the only one of its kind.

Neupert, a 36-year-old industrial designer, has been interested in the concept of the electric bicycle since the beginning of his career. Over the last three decades, he has collected about 600 models -- they make for an impressive assortment of generally chunky electric vehicles, some with batteries the size of picnic baskets.

Neupert first began exploring the market in 1992, when it consisted of exactly three models. Two years later, he began doing an annual review of all products he could find on the market. This has led to ExtraEnergy becoming an internationally recognized institute for the testing of light electronic vehicles.

With calibrated power sensors on the pedals and stress sensors attached to the frame, Neupert's test crew spend much of their time pedalling around the Thuringian hills. Back in the laboratory, experts test the safety of batteries in a crash and in overloading scenarios. The results are occasionally disastrous. Neupert collects the charred remains of the batteries that burst into flames during lab tests in a container. Here you'll also find the odd frame that broke under pressure and weight testing. 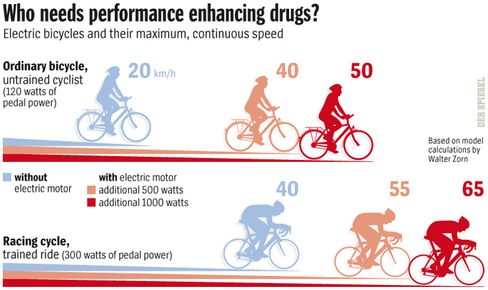 Last year, ExtraEnergy spent nine months testing 28 bikes. "Motors failed, motor controls went up in smoke, and batteries and wires disintegrated," the tester wrote in his sobering report. Cheap imports from China generally proved the most unreliable. Neupert estimates that about 2,000 manufacturers now produce roughly 20 million electric bikes a year in China, most of them of appalling quality. The majority of his organization's highest ratings went to European brand-name bikes priced between €1,300 ($1,770) and €3,500 ($4,760).

Currently, these products appeal primarily to older buyers. The average buyer of a pedelec bike, says Derby Cycle CEO Seidler, is in his or her mid-50s -- an age when personal pedal power is decreasing and purchasing power is on the rise.

The clichéd vision of the beer-bellied electric biker who is more likely to associate the name Armstrong with manned space flight than professional cycling may be perfect as a customer -- but it's not exactly the electric bicycle industry's ideal. And Seidler, for one, doesn't want to see potential sales limited to a bunch of overweight wimps. "In the long run," he says, "the motor will work its way into virtually all bicycle categories." For example, Derby Cycle, Germany's largest bicycle maker, also plans to include sporty models in its electric bike line up.

Derby's marketing director Herwig Reus is not in his mid-50s. In fact, he's about half that age, he holds a degree in sports economics, plays basketball and has a shaven head. He's clearly fluent in the body language of dynamic youth.

Yet many aspects of Derby Cycle -- and its Cloppenburg core brand, Kalkhoff -- seem less progressive than Reus. To the visitor, the headquarters of this company, founded in 1919 by a rural postman, have all the charm of a weathered history museum, complete with intrepid-looking pre-war bicycles with porous tires and torn seats parked in the stairwell. Reus admits that there is still "room for improvement" in the design of the company's electric bikes. The motor, encased in clunky plastic, looks more like a bit of fitness equipment in a rehab clinic than an example of futuristic technology.

Speed is also a problem. European law permits vehicles with a supporting motor to provide no more than 250 watts of power and to travel at a maximum speed of 25 kilometers per hour (16 mph). Anything more powerful turns the electric bike into a motor vehicle, which would mean the rider requires a driver's license.

Some manufacturers have paid little heed to those regulations. For the sake of appearances, the speed limit is usually programmed into the bicycle's control device. But disabling it is about as easy as installing a new ring tone into a mobile phone.

Derby Cycle is the first cycle manufacturer to obtain official approval from Germany's TÜV vehicle inspection agency for its faster model, the Pro Connect S. Designated as a small motorcycle, the model will need a moped license plate and will have to be insured for about €70 ($95) a year. Marketing Director Reus calls the €2,799 ($3810) electric bike "our high-end product." He believes the product will get riders thinking about cycling in a completely different way, a way where "pedestrians become moving slalom gates."

Because lawmakers prefer to discourage that sort of thinking, the more powerful pedelecs -- the ones that are now required to be registered -- are banned from using urban bicycle paths when their motors are turned on. As a motorized vehicle, the speedier electric bike is required to share the road with cars and trucks. But that creates a new problem: the Pro Connect S is too slow for the open road. Air resistance increases with speed. With only 250 watts of additional power, the electric bike is incapable of travelling faster than 40 kilometers per hour (25 mph). As a result, the pedelec-rider, forced by law to use the street, is honked at, overtaken with reckless abandon and soon tires of their newfound status as the driver of a motor vehicle.

However more powerful models are also on the way. A 500-watt bike made by Riese & Müller, a bicycle manufacturer based in Darmstadt, is currently undergoing the TÜV inspection process and is expected to be available in stores this summer. It will cost just under €4,000 ($5,440). And the power of the motor, paired with a healthy cyclist's legs, will enable riders to reach speeds of about 50 kilometers per hour (31 mph). "You have to be able to move with the traffic flows. It's only then that it makes sense," says the company's CEO Heiko Müller.

Dolphin, a company founded by Basel, Switzerland, design engineer Michael Kutter, is also ready to move into the 500-watt class. Kutter, who also holds a degree in philosophy, has designed a pedal-electric hybrid drive with a transmission similar to the hybrid mechanics found in the Toyota Prius car. The top-of-the-line model, the Dolphin Express, will be available in German retail stores in July for €3,489 ($4,745). And Kutter's Stuttgart distribution partner, Stromrad, is already advertising the Express on its Web site as an easy-to-use substitute for a scooter.

The thrill of outrunning a Vespa and not even having to wear a helmet is even one that appears to be tolerated by the German authorities. Bikes with pedal-electric motors, with up to one kilowatt of power, are not subject to speed limits or helmet laws, provided the bike, when operated purely in electric mode, has a top speed of no more than 20 kilometers per hour (12.5 mph). "And it's irrelevant whether one's speed was temporarily increased by a tailwind, a downhill stretch or muscle power applied to the pedals," explains a spokesman for the Federal Bureau of Motor Vehicles.

An experimental racing bike built at the School of Engineering in Biel/Bienne, Switzerland, is an excellent example of just how much latitude current laws leave for pedal-electric excesses. The model, dubbed the "IntelliBike," supplies the pedal drive with 1.1 kilowatts of additional power. Which means that even amateurs -- if they're in shape -- will be able to reach speeds of about 100 kilometers per hour (62 mph) on this particular cycle.