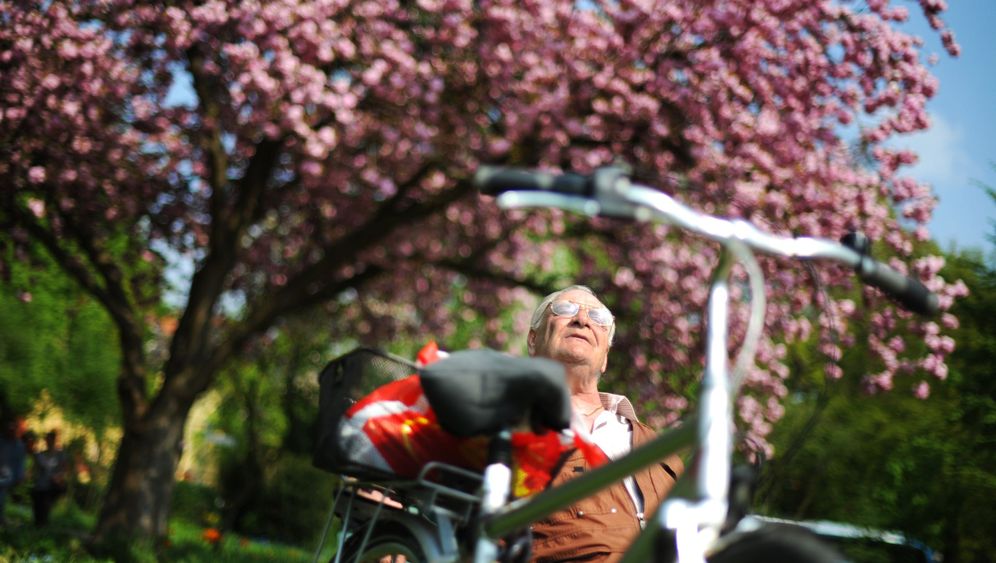 "Man, oh man," read the words emblazoned on a white tent set up in the pedestrian zone of the German city of Erfurt. Those who ventured inside received information on a dramatic scientific finding: One in three men over the age of 60 suffers from "testosterone deficiency syndrome." If left untreated, this dastardly condition can cause excess weight, anemia, hot flashes, osteoporosis, lowered sex drive and bad moods.

This same tent will be making appearances through November in Augsburg, Saarbrücken, Hanover and other German cities. Here, men over the age of 40 can have their testosterone level checked at no cost. They can also learn how to counteract testosterone deficiency: either get more exercise, or apply testosterone gel to their skin.

This traveling testosterone counseling service provided by the "German Society for Men and Health" was not born out of a purely charitable impulse -- there is a marketing angle at work here as well. The organization is funded by pharmaceutical company Jenapharm, the leading manufacturer of testosterone gel.

It's one of five companies that sell the male sex hormone, which is rubbed into the skin, and business couldn't be better. This can be seen in the number of prescriptions issued through Germany's statutory health insurance funds. The Scientific Institute of AOK, one of Germany's largest insurers, analyzed this data on behalf of SPIEGEL and found that prescriptions for testosterone gel more than tripled between 2003 and 2011. The most recent statistics show 390,000 daily doses per year. In Germany, a month's supply of the product costs around €60 ($80).

These gels are also doing a roaring trade in other countries, such as Switzerland and the United States. A survey of over 10 million members of one American health insurance company showed that nearly 3 percent of all men over 40 are now prescribed testosterone. At the same time, this analysis also revealed that, medically speaking, most of these prescriptions were unnecessary.

The testosterone trend comes with attendant risks. Used in excess, the male hormone can promote the growth of prostate cancer and increase the risk of heart attacks and strokes. American doctors Lisa Schwartz and Steven Woloshin recently warned in the medical journal JAMA Internal Medicine that this widespread use of testosterone is "a mass, uncontrolled experiment that invites men to expose themselves to the harms of a treatment unlikely to fix problems ... that may be wholly unrelated to testosterone levels."

The booming business in testosterone gel provides a prime example of the ways in which pharmaceutical companies exaggerate illnesses to create new markets for their products.

Experts agree that men with hypogonadism -- in which the testicles produce little or no testosterone -- do indeed benefit from receiving supplements of the hormone. But few men actually suffer from serious hypogonadism. So when the newly developed testosterone gel hit the market, doctors and pharmaceutical companies looked for other symptoms the product might treat -- and found them in male menopause.

The idea of male menopause -- also known as andropause or male climacteric -- existed even in ancient times. The Romans considered age 63 to be a dangerous moment of change, and congratulated one another for having survived this "annus climactericus maximus."

Around 100 years ago, some neurologists observed a menopause-like change in men. Berlin neurologist Kurt Mendel, for example, believed he had diagnosed a "very noticeable tendency toward emotional reactions and crying, which had not previously been present" among his older male patients. He prescribed salt baths and cold rubdowns.

Later, with advances in the study of glands, this supposed andropause was explained as being a hormone deficiency. Chemists at first obtained testosterone by extracting it from bulls' testicles by the ton and male human urine by the hectoliter, before achieving laboratory production of artificial testosterone in 1935.

"But it wasn't until the late 1960s, as the field of andrology expanded, that medical attention began to turn once again to the male climacteric," says medical historian Hans-Georg Hofer, 41, at Bonn University. Neologisms such as "andropause" and "PADAM" -- for "Partial Androgen Deficiency in Aging Men" -- started to catch on.

The idea of andropause took off in earnest a few years ago, when scientists developed a way to administer testosterone as an easy-to-use gel, rather than through shots and patches. Suddenly there was a new epidemic, too, to match this new product. In March 2003, pharmaceuticals company Jenapharm announced that male climacteric affects "at least 2.8 million Germans, according to epidemiological estimates."

Jenapharm then hired Hermann Behre, director of the Center for Reproductive Medicine and Andrology at Halle University Hospital, to speak at a press conference about testosterone gel. Behre will also speak at an upcoming "Jenapharm Symposium" on testosterone in Münster this December.

Besides making use of such so-called "opinion leaders" (known in the industry as "Mietmäuler," or "rent-a-mouths"), pharmaceutical companies also use the Internet to disseminate information on these diseases to the general public. Jenapharm, for example, runs the website testosteron.de, which it uses to fish for patients. "Listlessness, hot flashes, no more sex drive?" the website asks. "Take the 'testo test' right here online."

What follows are 18 questions concerning pain, sweating, sleep, irritability, virility and libido. Even those who answer with only "medium-level symptoms" receive the diagnosis that their symptoms are "highly pronounced on the whole" -- followed by the urgent advice to see a doctor.

Consequently, more and more men are asking their urologists about testosterone. "The indications are being expanded -- by patients themselves as well," reports Wolfgang Weidner, who heads the department of urology, pediatric urology and andrology at Giessen and Marburg University Hospital. Weidner, 65, prescribes the gel only for hypogonadism or for cases of erectile dysfunction in which even the impotence drug Viagra has no effect. Other than that, he cautions, "I'm very mistrustful of prescribing testosterone gel for lifestyle reasons, for improving quality of life."

Heiner Mönig, 59, who heads the endocrinology department at Schleswig-Holstein University Hospital, in Kiel, is similarly skeptical. "Many men have low testosterone levels that are normal for their age," he says. "If they are experiencing symptoms, it's not a result of a hormone deficiency. There can be many other causes."

"We all grow older," says Stephan Wächter, 59, an urologist practicing in the city of Fürth. He finds the entire concept of "male menopause" dubious. "That's pretty undefined," he says. "Where is the dividing line between being sick and being well?"

There is in fact a specific dividing line, but it's an arbitrary one. Halle University Hospital's Hermann Behre and other members of a working group called "The Aging Man" came to a consensus in a paper, published in 2000, that the normal limit is 12 nanomoles of testosterone per liter (2.1 pints) of blood serum -- and in doing so provided testosterone manufacturers with millions of new potential customers overnight. This cutoff is so high that around 20 percent of healthy older men fail to meet it simply for reasons of normal human biology.

In truth, well-being is in no way dependent on hormone level. Some men have above-average testosterone levels, yet feel listless. Others have low hormone levels, but are full of energy. And one out of four elderly men has a higher testosterone level than the average young man. Hans-Georg Hofer at Bonn University says: "The concept of attributing everything to hormones is far too mechanistic."

Other arguments in favor of testosterone therapy are also scientifically unsupportable. "Physicians and patients who assume that treatment has an important effect on all or most symptoms may be surprised by the evidence from randomized trials," write Schwartz and Woloshin in JAMA Internal Medicine. "Testosterone therapy results in only small improvements in lean body mass and body fat, libido, and sexual satisfaction, and has inconsistent (or no) effect on weight, depression, and lower extremity strength."

What is undisputed, on the other hand, are the detrimental effects excessive testosterone levels can have on the male body. In a recently published study, over 200 elderly men received either testosterone gel or a placebo gel without active ingredients applied to their skin daily.

Increasing the Risk of Cancer

After six months, the doctors stopped the study, so as to no longer compromise the health of the subjects receiving testosterone.

Another known fact is that use of testosterone can increase the risk of prostate cancer. More than 40 percent of men over 50 have some small clusters of cancer cells in the prostate, but these generally remain dormant. But testosterone causes precisely these otherwise harmless cancer cells to experience accelerated growth.

Stephan Wächter, the urologist in Fürth, says: "If one prescribes a man testosterone so that he can feel fitter, but in doing so causes him to develop prostate cancer, then that is not acceptable." He warns that the current boom in testosterone use might well be followed in a few years by a prostate cancer epidemic.

A comparable scandal occurred previously in women's health. For years, gynecologists downplayed indications that administering artificial sex hormones during the menopause years was risky. As a result, many women who had unhesitatingly taken these hormones subsequently developed breast cancer.