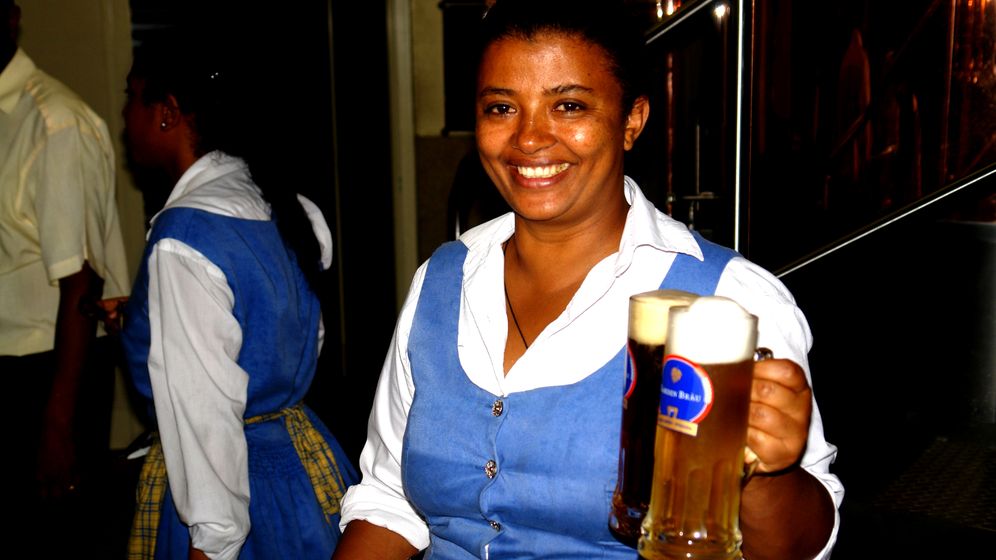 Photo Gallery: Master Brewer on the Horn of Africa

On this evening, it does not take long before the waitress, Mesi, begins to perspire. She jots down orders every few seconds before she and her colleagues bring more and more frothing mugs of beer from the courtyard to the tent. The woman in the traditional German dirndl is eagerly awaited by dozens of thirsty customers. Welcome to the Beer Garden Inn, one of the trendiest restaurants in Addis Ababa!

It's nights like this that bring a smile to the face of Banshebi Tejiwe. Tejiwe could be described as the inventor of Beer Garden Inn but first and foremost he is the master brewer of the Beer Garden Inn's boutique beer Garden Bräu. "My brewery is the only one in Ethiopia that adheres strictly to the German beer purity law," he says. The beer purity law, called the "Reinheitsgebot" in German, is almost 500 years old and specified that beer be made only out of barley, hops and water.

The familiar odors of traditional German dishes, like bratwurst and jägerschnitzel, cheese spätzle and grilled chicken, waft through the dining room. Glasses clink and laughter is heard above a steady hum of conversation. Close your eyes for a moment and you might think you were at an inn somewhere in Bavaria -- not on the Horn of Africa.

'Ebony' and 'Blondy' Beers, Side by Side, in Harmony

Despite the good food, most of the guests come here primarily for the golden delicious. The Garden Bräu has two varieties on offer: A light ale called "Blondy" and a darker one named "Ebony." In the middle of the premises, one sees two of the instruments of traditional beer brewing: A lauter tun, a vessel used for separating grain and liquid, and a mash tun, a vessel in which grain and liquid is mixed. The containers make it clear that the beer is crafted on the premises.

The beer is served in half-liter glasses, one-liter mugs or in a three-liter container with a tap from which guests can serve the beer themselves. "Mostly people appreciate that you don't get a headache from my beer," says Tejiwe with a grin. In Ethiopia that quality is anything but taken for granted. In contrast to the Garden Bräu, virtually all other local beers contain additives.

The story of Tejiwe and his beer is a German-Ethiopian success story. It started in Addis Ababa during the student riots of the 1970s, when Haile Selassie was the emperor of Ethiopia. Like many other young students, Tejiwe, who wanted to become an electrical engineer, was not allowed to study. He looked for something else to do, and became an apprentice in the Ethiopian brewery Saint George.

It was a German brewer who really gave him the taste for beer though, Tejiwe recalls. He jumped at the opportunity to go to Germany and in Ulm, he graduated from the brewing academy. He then moved on to Weihenstephan, the Bavarian state brewery which claims to be the oldest operating brewery in the world. "All the good beer brewers come from Weihenstephan," he says, not without a little pride.

Later Tejiwe got married in Germany -- even though he always knew that he wanted to go back to Ethiopia some day. Unlike in Germany, there was an urgent need for good beer brewers back home. His German wife was convinced and moved with him to Ethiopia. Today, he says he dreamed of opening his own brewery for almost 25 years -- but for years, a lack of financing put the project on hold.

The World is Welcome in this Beer Garden

Finally, in 2006, the Beer Garden Inn opened its doors not too far from the international airport of Addis Ababa. Since then, it has become a mixture of hotel and tavern. Although there are other partners in the business -- a German couple and five Ethiopians -- it is, nevertheless, something of a family business, with daughter Ariane managing the hotel and her father brewing the beer.

Although the Beer Garden Inn is not cheap by Ethiopian standards, it is not only diplomats and international businessmen who come here. On the contrary, in fact. "In the beginning, we had Ethiopians busting down the doors," says Tejiwe's daughter, Ariane Addisitu Funder. Even now, locals still constitute the majority of the guests although the regulars are more likely to be foreigners.

Today there is a colorful mix of people gathered around the long wooden tables in the beer tent. Hale, a young Ethiopian journalist, chats with two American friends who want to open an investment company this year in East Africa. "The beer tastes fantastic," one says. A few tables away sits a group of giggling, dressed up Ethiopian girls -- next to them a Swedish businessman sits silently eating a Bavarian pork dish with sauerkraut.

Kitsch in Germany but Touching in Ethiopia

Indeed, the entire scene would be kitschy if Tejiwe weren't so earnest about it. "I'm not really a businessman," he says. He just wants the Beer Garden Inn to have "the atmosphere that I loved so much in Germany."

Does he miss Germany? "Yes, some things definitely. For instance, the accuracy and the order," Tejiwe says. Then, after a moment's thought, he adds: "But even in Germany you won't find a fermentation cellar as clean as mine." Tejiwe has to laugh as he says that. He has become somewhat German himself.

His employees have grown accustomed to their employer's strict rules. "I like Germany very much," says the waitress Mesi. She has never been there but she has the feeling that she would feel at home there. "This here is my Germany," she beams. Of course, she means the Germany that Tejiwe has created. Because it's a beautiful country.

10 Bilder Photo Gallery: Master Brewer on the Horn of Africa