In the annals of Germany's security services, the following event won't be recorded as their finest hour.

On the night of July 25, a 24-year-old man clutching a bag full of marijuana and ecstasy pills managed with relative ease to get on board an empty government jet used frequently by Chancellor Angela Merkel, while it was parked at a closed military section of the Cologne airport.

The man, a bodybuilder of Turkish descent named as Volkan T., proceeded to stage a raucous, one-man party. Reports said he stripped down to his underpants, sprayed fire extinguisher foam around the elegant cream and beige interior, pushed buttons in the cockpit, released an inflatable emergency slide and danced on the wing of the Airbus 319.

The plane, which is also used by other top state officials including President Joachim Gauck, was delivered three years ago and is one of two medium range A319 jets in the government fleet. It has a private office, a conference room that seats 12 and a main cabin with room for 32.

The incident was initially reported last month, but is now attracting renewed attention after an intriguing eight-page police report was leaked to German newspapers.

The chronology of events was compiled by the Federal Police, whose duties include providing security at borders, railways, airports and state buildings. The police declined to comment on its contents.

Plane Could Have Taken Off

According to newspapers including Welt am Sonntag and General-Anzeiger, the report reveals that the plane was accessible through its emergency exits and the cockpit door was open.

It also says that it took police, private security guards and members of the Bundeswehr army almost four hours to get the intruder off the plane.

The Airbus was loaded with up to eight tons of fuel and technically, the intruder could have taken off or at least gotten it rolling.

While the report makes for entertaining reading, it also suggests that Germany needs to tighten up procedures for protecting its government jets. Pressure sensors in the ground that sound an alarm when someone steps on them had apparently been switched off because of construction work.

The Cologne state prosecutor's office, which is investigating the case, neither confirmed nor denied the contents of the police report on Tuesday.

"The investigation is focused on the charges of dangerous interference in aviation but also trespassing and damage to property. As part of that probe it's of interest how the accused got onto the site and into the plane," prosecutor Ulrich Bremer told SPIEGEL ONLINE.

Bremer ruled out terrorism as a motivation. "We have no indication of that at all so far," he said.

On the night in question, Volkan T. reportedly had a row with his girlfriend. He is believed to have been high on drugs throughout the incident.

Police Dog Made the Arrest

It began when he drove from his home in Cologne to the airport and got past a guard post by saying he had been invited to a wedding reception being held in the nearby officers' quarters. He then climbed a barbed wire fence, walked across the tarmac, clambered onto the plane's left wing and got in through an open emergency exit.

While playing with the cockpit buttons, he inadvertently triggered an alarm that was logged by military personnel at 8:40 p.m. But the man wasn't arrested until 12:23 a.m. when a police dog bit him in the leg.

While all this was happening, Merkel was hundreds of kilometers away, watching the opera "The Flying Dutchman" at the opening of the annual Wagner opera festival in the Bavarian town of Bayreuth.

At 9:54 p.m., the army heightened its alert level from three to one, its highest. The military police didn't arrive until 10:16 p.m., when the aircraft was surrounded but no one ventured inside. At 11:23 p.m., steps were rolled up to the aircraft and a police officer using a megaphone began urging the man to come out. He didn't.

Finally, at 12:16 a.m., dogs arrived to deal with the situation. Seven minutes later, Volkan T. was arrested, slightly injured from two bites to the leg. He has been detained in a secure psychiatric hospital ever since.

His antics put the plane out of action for several weeks and caused an estimated €100,000 ($133,720) in damage. The jet needed new carpet, a new coat of paint on its wing and a new emergency slide. It was declared operational again this week after a successful test flight.

"Of course we have reviewed our guidelines in response to this and changes are being made," a spokesman for the German Air Force, which manages the government jet fleet, told SPIEGEL ONLINE.

That's not enough for the opposition Social Democrats, who seized on the incident to criticize Defense Minister Thomas de Maizière, already under fire for various costly gaffes in procuring defense equipment.

"Mr. de Maizière must provide an exact account of how this blatant security breach in his VIP squadron happened," SPD lawmaker Rainer Arnold told Welt am Sonntag newspaper. "This incident must be fully investigated." 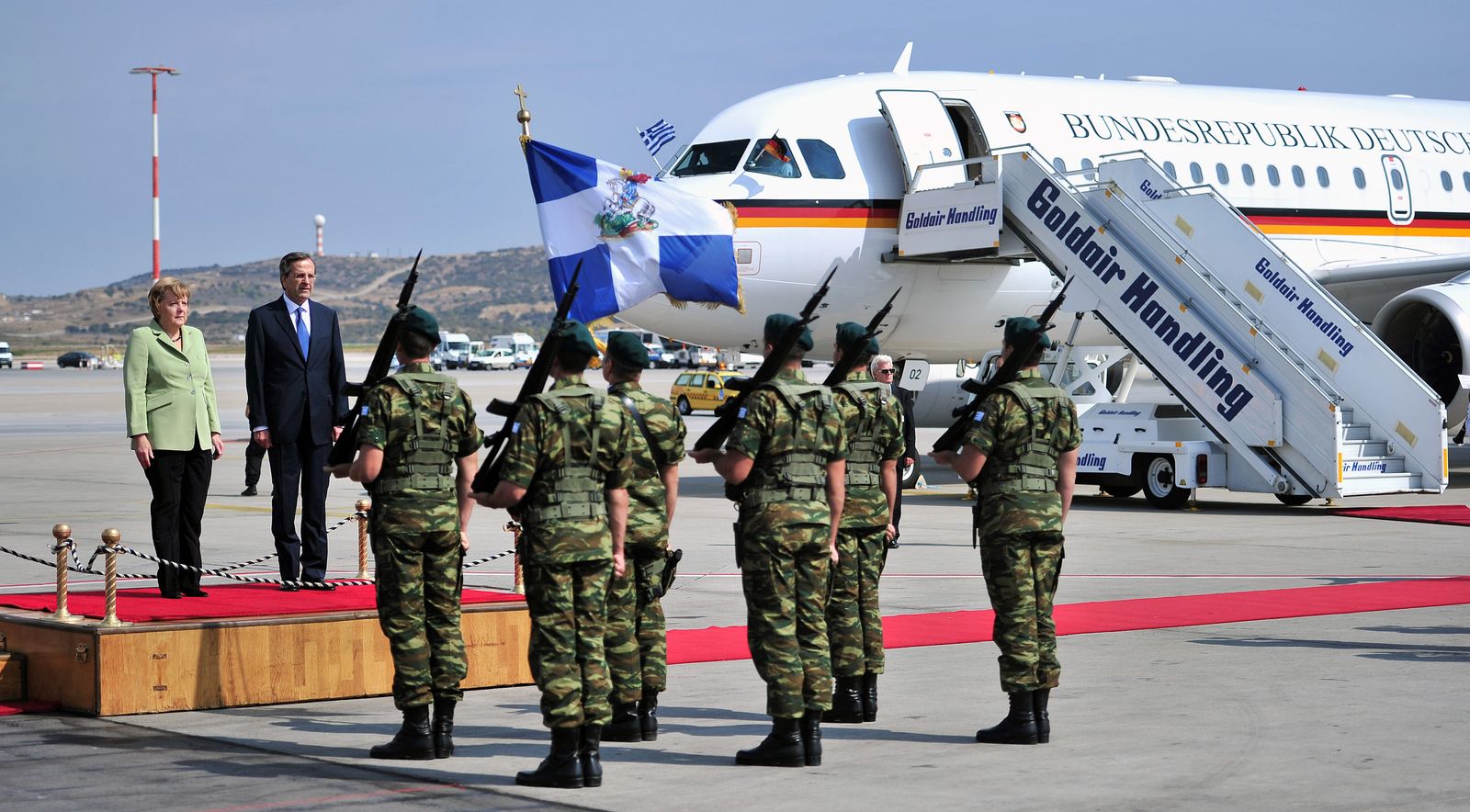 German Chancellor Angela Merkel in front of one of the government's two Airbus A319 jets.