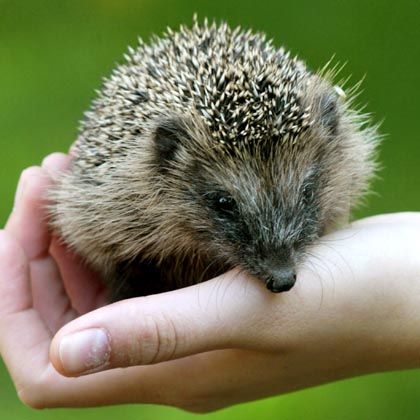 No more ice cream for you

A recent spate of documentaries and media reports has made McDonald's bashing a popular sport. Indeed, there's a tendency in the press to portray the company as a heartless, international conglomerate that just makes people obese. Until this week in Germany, however, McDonald's has probably never been accused of causing starvation.

The western European hedgehog, a nocturnal, insect-loving mammal common across northern Europe, has apparently acquired a taste for the McFlurry, a popular ice cream treat sold by the American fast-food behemoth. And dozens, if not more, have perished as a result. The problem is that the furry creatures are getting their heads caught in the dessert's convex plastic lid, much as ducks and fish once got trapped in the plastic packaging that holds together a six-pack of beer cans.

Friends of the Earth Germany (BUND), the nation's largest environmental group, says that it has received reports of between 50 and 100 cases of hedgehogs getting trapped in McFlurry packaging during the last two years alone. The group then lobbied McDonald's to develop a hedgehog-safe lid.

"There hasn't been a scientific study on the matter, but anyone who has driven down the autobahn and seen all the litter can understand why these discarded McFlurry cups would be a hazard for Hedgehogs," Rolf Bahrens, who works for BUND in the German state of North-Rhine Westphalia, told SPIEGEL ONLINE. "People have called us, reporting many cases where they found a hedgehog that had crawled into one of these cups and died of starvation."

A spokesman for McDonald's in Germany said in a phone interview with SPIEGEL ONLINE that company executives started working on the problem soon after BUND approached them two years ago, but that it took time to develop an alternative lid.

"Tests have been conducted considering the average size of hedgehogs -- we needed to find an opening that was big enough for a spoon but small enough that a hedgehog could not get inside," said Alexander Schramm, a McDonald's spokesman.

Schramm explained that the company considered several different lid sizes and even a cover with flaps that would allow hedgehogs to crawl in and out. In the end, it settled on a design already in use in the United Kingdom, where McDonald's confronted the exact same problem in 2006 after complaints from the British Hedgehog Society.

Schramm was unsure whether McDonald's had confronted the hedgehog conundrum in other countries, but pointed out that the McFlurry is not available in every country. Hedgehogs are native to Africa, Asia and Europe, while the Golden Arches can be found on every continent except Antarctica.

McDonald's began introducing the new small-mouthed lids earlier this month and they should be available in all stores in Germany within weeks. The rollout may come just in time -- German wire service DPA reported Monday that mild winter weather in Germany was drawing hedgehogs out of hibernation weeks earlier than usual.