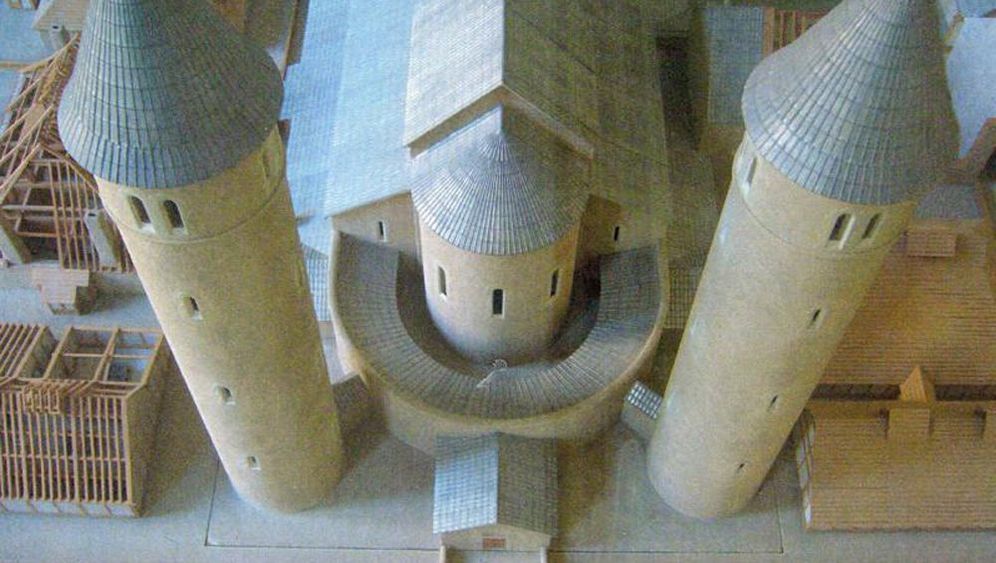 What did a medieval stonemason do when heavy rainfall interrupted his work? Umbrellas are impractical at construction sites. Gore-Tex jackets weren't yet invented, nor were plastic rain jackets. "He donned a jacket made of felted loden cloth," says Bert Geurten, the man who plans to build an authentic monastery town the old-fashioned way.

Felted loden jackets will also be present on rainy days at Geurten's building site, which is located near Messkirch, in the southwestern German state of Baden-Württemberg, between the Danube River and Lake Constance. Beginning in 2013, a Carolingian monastery town will be built here using only the materials and techniques of the 9th century. From the mortar to the walls, the rain jackets to the menu, every aspect of the operation will be carried out as just as it was in the days of Charlemagne. "We want to work as authentically as possible," says Geurten.

The building contractor from the Rhineland region has long dreamt of carrying out his plan. When he was a teenager, the now 62-year-old was inspired by a model of the St. Gallen monastery plan in an exhibition in his home city of Aachen. The plan, dating from the beginning of the 9th century, shows the ideal monastery, as envisioned by Abbot Haito of Reichenau.

Haito dedicated his drawing to his colleague Abbot Gozbert of St. Gall, who presided over the monastery from 816 to 837. He meticulously recorded everything that he believed was necessary for a monastic city, from a chicken coop to a church for 2,000 worshipers. Altogether he envisaged 52 buildings -- but they were never built. That will change in spring 2013, though, when ox-pulled carts wil begin carrying the first stones to the building site in the forest near Messkirch. It won't be finished until about 2050, according to estimates.

A Glimpse of the Middle Ages

The lengthy time frame betrays the ambitious dimensions of the project, which is not just a tourist attraction, but also a meticulous scientific undertaking. Twelve experts, including historians, architects and archaeologists, form the scientific council that oversees the monastic town. Their job is to advise the artisans while simultaneously learning from their experiences.

Such experiments offer a rare glimpse into the everyday life of past centuries. Often there is only one way to find out how people once built their homes, prepared their food or sewed their clothes -- by recreating the historic experience. Experimental archeology researchers have discovered that antique linen armor offers as much protection as kevlar vests, how beer was brewed in the Bronze Age and how Stone Age people sharpened blades.

The 9th century -- the era which will be recreated by the Carolingian monastery town project -- is a particularly interesting focus for such experiments. There are few surviving documents from the period some 1,100 to 1,200 years ago. "Our goal is not to end up having a monastery town, but to build it," says Geurten.

The first building will be a small wooden church. "Of course, in the Middle Ages, they didn't build the large stone church first," says Geurten. The craftsmen at that time did not want to postpone their prayers until the stone church was finished, so they constructed a simple wooden church as an interim arrangement until they could move into the magnificent stone building decades later.

Carts carrying building materials will be pulled by Hinterwald cows. With a height of around 115 to 125 centimeters (3' 9" to 4' 1")and weighing between 172 and 218 kilograms (380 and 480 pounds), these working animals come the closest to those used during the time of Charlemagne. "They are descended from the Celts' cattle," says Geurten.

Not just workers will have to adjust to medieval conditions, though. The plan also includes a special experience for visitors, who will walk a lengthy distance from the parking lot before reaching the construction site. "They should feel like they journey in time and leave the present behind them," says Geurten. If they get hungry, the monastery town will have a 9th-century menu. "The potato was unknown," says Geurten. "And there will be no coffee around to drink." Everything that the tradesmen and visitors will eat will be grown in the soil near the construction site.

The example of the French castle Guédelon proves that visitors will not be deterred by such a strict approach. In Burgundy, builders are constructing the 13th-century castle with medieval techniques. Every year the site attracts hundreds of thousands of visitors. "A Guédelon visitors' survey has shown that people want to return on average every three years," explains Geurten. "They want to see the castle grow and follow its progress."

He hopes for similar success at his monastic town. The project has initial funding of around €1 million ($1.3 million) from city, state and European Union sources, but that will only sustain it for the first few years. After that, the project will have to fund itself.

A Flood of Volunteers

Given the tight budget, craftsmen salaries will remain low. "The net wage is about €1,200 (per month)," says Geurten. "I can't pay more." The working hours are also a long way from what German trade unions recommend these days. They will work from April 2 -- Charlemagne's birthday -- almost without break until St. Martin's Day, on Nov. 11. During those eight months, there will be one single weekend off. "In the Middle Ages, the rent for the year was always paid on St. Martin's Day," said Geurten. The winter break lasts until April when the temperatures are warm enough to work again.

Despite the difficult conditions, the project has been swamped with applications. "I've had 85 stone masons apply already," says Geurten. "They all dream of having the chance to work with their hands." This also applies to the blacksmith. "They won't be hammering kitschy horseshoes for tourists. The forge must supply the site with tools," he adds.

Overall, the construction site will have 20 to 30 permanent staff in addition to volunteers. There has already been a lot of interest. "From Lufthansa pilots to a teacher, all kinds of people have applied." One candidate even sent his application written in medieval German on a real roll of parchment. Meanwhile, schools will likely be allowed to join in with the site's work for as long as a week. "We are developing a plan that will enable the children to prepare for their experience in the classroom first," says Geurten.

It will take about 40 years until the final stone is laid in the monastery church. By then it is highly unlikely that Geurten will still be alive. But he doesn't mind. "I just want a founding father's tomb in the crypt. Then they could come and light candles for me," he says.