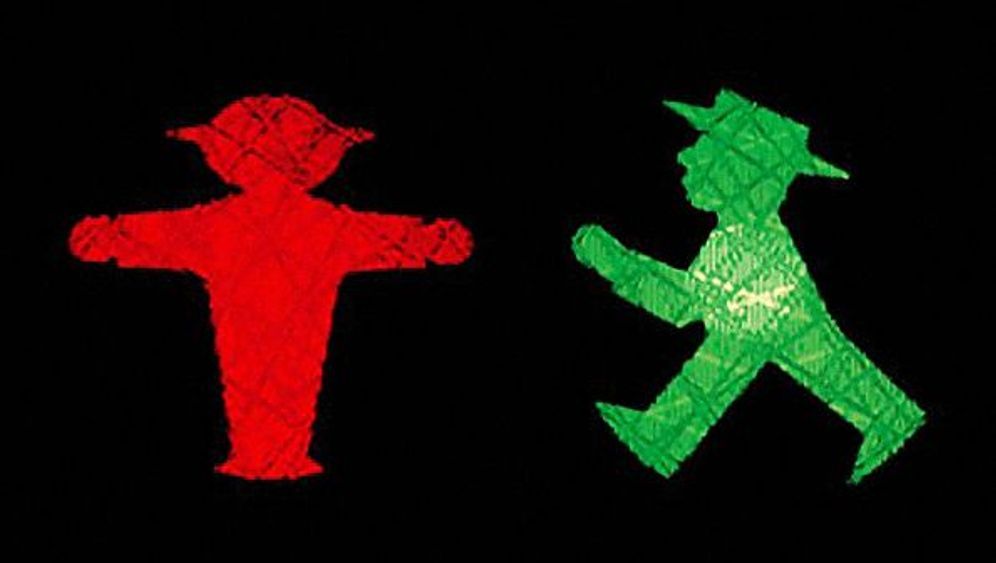 The hat could be a problem. The hat is the embodiment of capitalism, and that's why Karl Peglau was somewhat anxious when he made his recommendation before East Berlin's traffic commission on Oct. 13, 1961. Peglau, then 34 and the leading traffic psychologist in communist East Germany, was carrying his vision for a new pedestrian crossing signal in his bag. It was two men in red and green, and both wore hats.

But to Peglau's surprise, the hats passed under the critical gaze of research councils and traffic officials without arousing complaint. In fact, the only thing they changed was the direction in which the figures were walking, switching them from right to left. Peglau's concern that the hats would be rejected as petty bourgeois was "luckily not necessary," he later remembered.

The hat became the trademark of East German pedestrian crossings. It made them unique. Nowhere else in the world had traffic figures ever worn hats. The German Democratic Republic (GDR), at least when it came to this, was in the lead. But the defining accessory of the traffic light man didn't actually originate with Peglau, but with his secretary, Anneliese Wegner.

From Street Lights to T-Shirts

The psychologist had no idea that he had created two superstars. The Ampelmännchen or "little traffic light men," achieved cult status in the GDR, and were one of the few inventions from the East that survived German reunification. As such, nothing has been overlooked, and today, 50 years after their birth, Peglau's traffic light men are not only used as traffic signals, but can be seen on T-shirts of Hollywood stars like Dennis Quaid.

When Karl Peglau made his recommendations in the autumn of 1961, he already had years of research behind him. In several studies, he concluded that many of the 10,000 traffic deaths between 1955 and 1960 could be attributed to one thing: Pedestrians had to follow the same traffic lights as cars. When it was foggy, the red-yellow-green lights did not offer sufficient orientation for visually impaired pedestrians. According to Peglau, they provided the opposite, and were a safety risk. He estimated the economic damages of this problem in the GDR reached up to 155 million deutsche marks in 1959.

"Clearly distinguishable guiding signals" were meant to address this. A friendly red man with thick, outstretched arms would prompt pedestrians to stop, and a lively green man in mid-stride would denote the appropriate time to walk. Peglau provided personal characteristics in order to "appropriately provoke the desired pedestrian behavior through emotion," giving them pug noses, fingers, ears and mouths.

But their implementation was delayed. The extra-large lights the psychologist had recommended were too expensive, so officials relied on the same models used for traffic lights. That had consequences for Peglau's recommendations. The little men had to be made smaller and simpler in 1963. Peglau amputated -- removing fingers, ears and mouths. The traffic light men shrank to 16 centimeters.

It took five years before the first lights were tried out. It wasn't until 1969 that the first Peglau light was installed at the intersection of Unter den Linden and Friedrichstrasse in East Berlin. The advantages were quickly apparent. Color-blind pedestrians, children and the visually impaired could, thanks to the clear signals, better orient themselves. The traffic light men also made it on TV. During 80 episodes of the popular children's television program, "The Sandman," the traffic light men explained to children proper traffic behavior.

Saved from the Scrap Heap

When East Germany collapsed, the traffic light men nearly disappeared. In the mid-1990s, the pedestrian signals -- thought to be old-fashioned and technologically outmoded -- were supposed to be removed from intersections and scrapped. Nationwide, they were to be replaced with so-called Euro lights.

But the proposed Euro-men heightened the feeling among former East Germans that another part of their culture was dying. However, a committee called "Rescue the Ampelmännchen!" was able to achieve in Berlin what no one had considered possible. The local traffic minister gave in and issued an ordinance in favor of the East Berlin traffic light men.

And this is where the story of the little man would have ended if not for Markus Heckhausen. The resourceful businessman and product designer came to Berlin in 1995, coming up with an idea to build lamps out of the Ampelmännchen. The array of products quickly grew and, within a few years, Heckhausen starting selling key chains, T-shirts, and bicycle bells in his Ampelmann store. He also wrote a book about the history of the traffic light man together with designer Karl Peglau.

The fact that Heckhausen, from former West Germany, scored a merchandising hit with an East German symbol is an irony of history. He managed this despite Karl Peglau's initial skepticism that his traffic light man could be transformed into a product design or trademark.

"When he realized that I didn't want to sell off his little men cheaply, he was convinced," Heckhausen told the daily newspaper Sächsische Zeitung, which published an obituary after Peglau's death in 2009.

Heckhausen's children have long had the man behind the traffic signals in their hearts. They called Peglau "grandpa traffic light."