It isn't uncommon for scientists to spend countless hours staring into a microscope. Only rarely, however, do they take pictures of what they see. And even then the images tend to be gray and amorphous, depicting malignant tissue or the activity of a particular protein inside a cell.

For the uninitiated, such images are impenetrable. Yet the micro-world can also be a beautiful place, full of splendour that normally remains hidden to the naked eye. Capturing that beauty is the aspiration of micro-photographers, those who magnify the miniature and take pictures of the tiny. The images that result are often full of unfamiliar shapes and forms -- and surprisingly colorful. Only rarely is it possible to identify the subject being photographed. 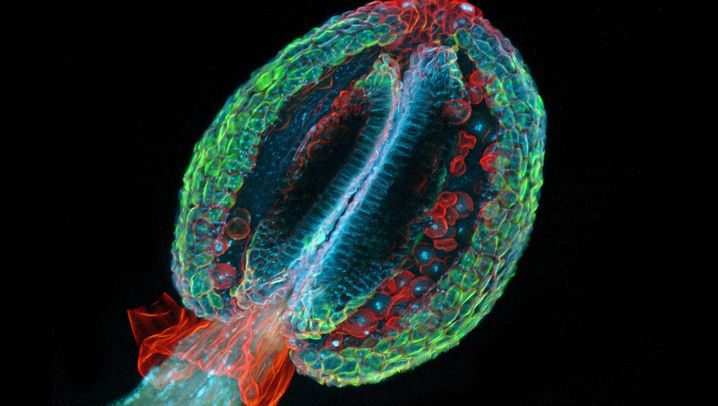 Photo Gallery: It's a Small World

Since 1974, though, depictions of the diminutive have been the subject of an annual photo contest, called the Nikon Small World Competition. A jury of photographers, science journalists and researchers choose the best of the best among microscopic photos.

One of those honored this year, Dominik Paquet of the Adolf Butenandt Institute in Munich, is a prime example as to how many of the images in the contest come into existence. His image, which came in 11th place, sprang from his research into the cellular processes related to Alzheimer's disease. Zebra fish are often used to make the death of nerve cells visible. Tiny fish larvae are injected with an Alzheimer's-causing gene, which is then colored using an antibody to make it easily perceptible. His laser microscope does the rest.

Paquet entered one of the resulting images to the photo contest. "Compelling images are important for research," Paquet, 29, says. "And they help communicate what we are doing to the broader public."

Some 2,000 photographers sent in their work to the contest, and the subject matter varies widely. Some photographers took pictures of magnified chemical compounds, others show details from the world of microbiology. And not all those who submitted photographs come from the world of science. Anyone with a microscope can participate in the contest. Although standard instruments are enough, many of the images were taken with highly specialized microscopes that can cost hundreds of thousands of euros.

But even the simplest of microscopes can result in impressive photos. An image submitted by photographer Gerd Günther from Düsseldorf took second place in this year's contest -- and was created using a simple, store-bought device. His subject? A simple sow thistle.