They appear to be quite content. Around 100 salamanders are bobbing around in the aquarium at the Hanover Medical School in Germany. Their brachial gills sprout like hair from their heads and their tiny mouths seem to smile as they press their tiny front feet against the sides of the aquarium.

They don't all look the same, however: Some are missing an arm or a leg; others have a stump where a limb is in the process of growing back.

These are no ordinary amphibians. Many have had flaps of skin removed or parts of their limbs cut off -- under sedation of course -- by scientists investigating their regenerative capabilities. "Coagulation sets in instantly", says scientist Björn Menger. "You can almost watch the healing process happening." It only takes a few months until the body part has regenerated completely -- "the younger ones are even faster," says molecular biologist Kerstin Reimers-Fadhlaoui.

It is this incredible ability to regenerate that makes the axolotl so important to science. Limbs grow back as do parts of organs and even sections of their brain and spinal column. They are unique in the world of higher vertebrates. 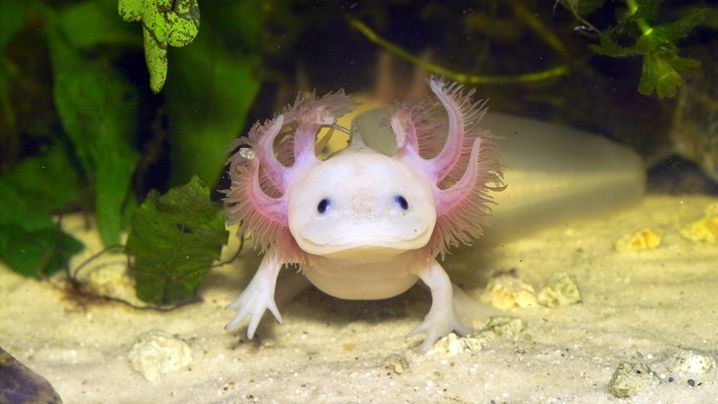 Photo Gallery: The Fabulous World of the Axolotl

In September 2010, molecular biologists, surgeons and amphibian experts set up a center for axolotl research in Hanover. Their hope is that they can unlock the healing secrets of the axolotl to help burn victims and amputees in the future. They also believe the animal may hold the key to longer life and prolonged youth and health. The axolotl lives extremely long for a salamander -- ages of 25 years have been documented. But it never really becomes an adult, remaining at the larva stage of development its entire life.

A Delicacy in Mexico

The axolotl is as good as extinct in the wild. Lake Xochimilco, not far from Mexico City, is the sole existing native habitat of the Ambystoma mexicanum. The lake, however, is badly polluted and foreign species such as perch, which have been released into the lake, have likewise pressured the axolotl. The salamander is likewise considered a delicacy in Mexico.

There is currently no conclusive research that explains exactly how the axolotl's regeneration process takes place. After the limb has been amputated, a layer of skin cells forms from the cells at the spot of the incision. A kind of scar tissue forms underneath and important new types of tissue begin to grow, such as blood vessels, muscles, sinews, bones and even nerves. Scientists had long thought that the cells at the amputation point reconverted through a molecular signal into pluripotent stem cells -- a type of stem cell which has the potential to become almost any cell in the body -- which subsequently developed into different cell types.

This theory was refuted in 2009 when a research team from the Max Planck Institute of Molecular Cell Biology and Genetics in Dresden published their work in the Nature medical journal. The scientists were able to observe individual cell types with the help of fluorescent proteins. No stem cell developed from a former muscle cell; new muscle cells came from progenitor cells. Likewise cartilage rebuilt itself from cartilage cells. Skin cells were more flexible: cartilage, sinews and skin can all grow from skin cells.

According to the author of the study, Elly Tanaka, this proved that the cells of the "regenerating wonder," the axolotl, do not behave so differently to those of mammals. Even man, during his embryonic development possessed the potential to regenerate. The fingertips of small children can grow back, an ability which disappears with age.

"We share a common evolutionary history with amphibians," explains Kerstin Reimers-Fadhlaoui. "Regeneration is in our own fundamental genetic makeup." Perhaps the axolotl will help us to discover how to switch the process on once again.

Reimers-Fadhlaoui and her colleagues have analyzed the transcriptome of the wound-healing cells, focusing on the active genes in the regeneration process. Some of this genetic information contains the building blocks of an enzyme that could be the trigger of cell renewal: amblox. Amblox is thought to support the formation of a transmitter, which causes the cells to change into progenitor cells.

The researcher explains that initial experiments have shown that human cells also respond to these transmitters. A layer of human skin cells programmed with the genetic sequence healed significantly faster after injury that the untreated control cells. The Hanover scientists now want to create amblox artificially. "Our long term goal is to produce a substance that supports the wound healing process," says Menger. "One could, for example, use it as a cream on burn wounds." This is all a long way off.

The recently established Axolotl Center in Hanover is dedicated to species protection as well as to medical research. Amphibian expert Christina Allmeling is in charge of caring for the animals and part of an international breeding program to preserve the endangered Ambystoma mexicanum. One of her principles is that no animal should die for the sake of research and that every axolotl has the right to a stress-free retirement after their life's work is done.

That includes Tiger Girl, at 16 the oldest known axolotl in German research. Her regenerative power has lessened rapidly with age. Her severed foreleg took almost a year to recover after she was bitten by a fellow axolotl. The ravages of time are apparent in her dull eyes and her lined skin. Even axolotls, it would seem, must succumb to time.