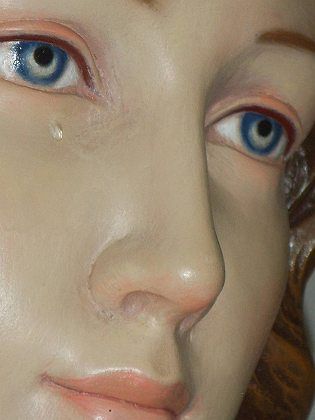 The Virgin Mary in the Bavarian town of Heroldsbach has been tearing up recently.

Dozens of witnesses were on hand for the miracle. A Madonna statue in a hostel for pilgrims in the small Bavarian town of Heroldsbach suddenly began shedding tears two weeks ago -- fat drops of water running down her cheek and dripping off her chin. For skeptics, the photos are difficult to ignore. One worshipper even kissed one of the tears which had run down Mother Mary's cheek and plopped onto her hand.

"They tasted salty," Annegret Mewis told the German news agency ddp. "They must have been real tears." Indeed, virtually every one of the 60 or so faithful present were likewise convinced that they had just witnessed a miracle.

But not all. Indeed, even after hurrying over to check out what was happening at the Heroldsbach hostel, the local priest, Rev. Dietrich von Stockhausen, still wasnt prepared to immediately believe what he was seeing. "When heaven wants to give us a sign," he said, "then it will be one that we can understand. It won't be such a vague one, and one that is so easy to manipulate."

The cleric has his reasons for being skeptical. In 2001, a statue of the baby Jesus likewise started to tear up, but when von Stockhausen locked the little guy in his closet, the tears stopped. Not only that, but he also found some suspicious pipettes in the trash can.

Heroldsbach's coming out as a pilgrimage site was likewise surrounded by those who doubted its holiness. In 1949, a group of 11-year-old girls claimed to have seen visions of the Virgin Mary, the baby Jesus, angels and saints up on the Heroldsbach Mountain. A small chapel was built there, but it was only in 1998 that the Archdiocese of Bamberg officially recognized the site.

Now, von Stockhausen wants to be sure that the most recent miracle is real. He wiped up some of the tears with a tissue and wants to send them to the University of Erlangen's forensic medicine institute to have them tested for authenticity. Indeed, on Friday, the Archdiocese of Bamberg will be holding a meeting to decide what steps should be taken to verify the miracle.

Whether a tissue will be enough is doubtful. "If we are talking about a miracle, then it will be difficult to provide scientific proof," Elke Pilkenroth, press spokeswoman of the Archdiocese of Bamberg, told ddp.