For more than four centuries, the Madonna with the sweet smile hung in the cathedral of what is now Wroclaw in modern-day Poland. Art historians admire the piece as a gem of Renaissance painting, academics have written about it, and it is adored by locals and visitors alike. The artist who painted "Madonna under the Fir Tree," Lucas Cranach the Elder, gave it to the bishop of what was then Breslau in 1510. Since then, it has been one of the region's major attractions.

However, since possibly as far back as 1946, the picture hanging in the cathedral has been a copy, and it took many years before this was detected. This summer, the original painting surprisingly returned to its country of origin, where the Polish culture minister handed it over to the current bishop of Wroclaw.

Officially, nobody knows where the picture was hidden in the intervening decades. The Catholic Church, which is once again the painting's guardian, says it is obligated to keep silent on the matter. As a result, the story of this Cranach painting remains as strange as it is intriguing.

Its odyssey began during World War II. In 1943, the precious painting and other art treasures belonging to the city of Breslau, which was then part of Germany, were taken to a Cistercian monastery in the countryside for safekeeping. Three years later, the artist Georg Kupke used the original to make a copy -- or at least that's what he would later claim. He said he was commissioned to do so by Siegfried Zimmer, a priest from Breslau.

In 1985, Kupke said the priest had told him: "If we manage to make a good copy of the 'Madonna under the Fir Trees,' we can prevent it from falling into communist hands. We can leave them the copy and smuggle the original to the West." Kupke said he was "completely intoxicated with excitement" about the idea.

The Madonna in his copy of the painting has a slight squint. But nobody appears to have noticed that the painting Zimmer hung on the wall was a forgery. The priest emigrated to the West in 1947, and the scam wasn't discovered until 1961, when a Parisian photo agency asked the authorities for a picture of the famous Renaissance painting in the cathedral.

This, of course, left officials wondering where the real Madonna was. To this day, much of the story remains a mystery.

It's not clear what Zimmer did with the painting. After leaving the priesthood, he became a religion teacher and lived in Traunstein, a Bavarian town near the border with Austria. The Madonna allegedly hung in his living room. When he died, in July 1979, he turned out to be a surprisingly wealthy man. His estate included ancient Egyptian treasures, a mummy and a coin collection -- but neither Cranach's Madonna nor a will.

Rumors about the Missing Painting

Nevertheless, beginning in the late 1960s, there were repeated rumors about the Madonna showing up on the private art market.

Renowned Swiss art historian and Cranach expert Dieter Koepplin remembers these shady offers. "In 1969, the Madonna was offered to a German collector in Switzerland who already owned other Cranach works," he recalled.

Two years later, Koepplin traveled to Geneva on behalf of this collector. There, he met two men in a hotel, who then led him to a nearby house. It was here that Koepplin saw Lucas Cranach the Elder's "Madonna under the Fir Trees." Koepplin says that he was and remains "absolutely certain" that it was the original. "But I was also certain in my refusal to confirm that to these gentlemen." They wanted him to confirm the picture's authenticity, but Koepplin refused -- and the painting disappeared off the market again.

At the time, the painting had yet to be officially declared missing. That didn't happen until 1981, when the Catholic Church indicated it might even be interested in buying it back. The Church's offer of 1.5 million deutsche marks was apparently not enough, and middlemen demanded 10 times that figure. Back in the 1970s, the Madonna had been offered to state museums in Berlin and Munich.

In 1985, the German weekly magazine Stern reported that the painting had been in the hands of a realtor in Regensburg until 1973, when he had exchanged the Cranach Madonna for a Rubens landscape, which turned out to be fake. A year later, the celebrity glossy magazine Bunte claimed the picture was in Switzerland and that the magazine was "negotiating with middlemen" itself. And yet the Madonna never turned up.

A Surprising though Suspect Return

That changed this summer, when it was handed over. According to the Polish Foreign Ministry, the abducted painting had finally found its way home. The official end to this complicated case is as incredibly simple as it is wonderful: The heirs of a Swiss art collector donated the Cranach painting to the Diocese of St. Gallen, which then handed it over to the Catholic Church in Wroclaw.

Nevertheless, a spokesman for the diocese won't reveal the identity of the painting's last owner, who died last year, claiming the handover is akin to a confession and therefore confidential.

For the time being, it can only be assumed that the Madonna that has been in Wroclaw since July 27 is actually the real one.

Experts still have to appraise -- and hopefully confirm -- the painting's authenticity as well as the stops it made during its mysterious odyssey. At least that is the demand of Heidelberg art historian Michael Hofbauer, an art historian based in the western German city of Heidelberg who heads the cranach.net research databank -- and thinks the official version of the story leaves too many questions unanswered. Just like other spectacular cases, he says, "criminal and art history are sometimes interwoven."

The squinting Madonna painted by Kupke in 1946 has now been removed from the cathedral, although it remains in Wroclaw. The Church is hanging on to it -- just in case. 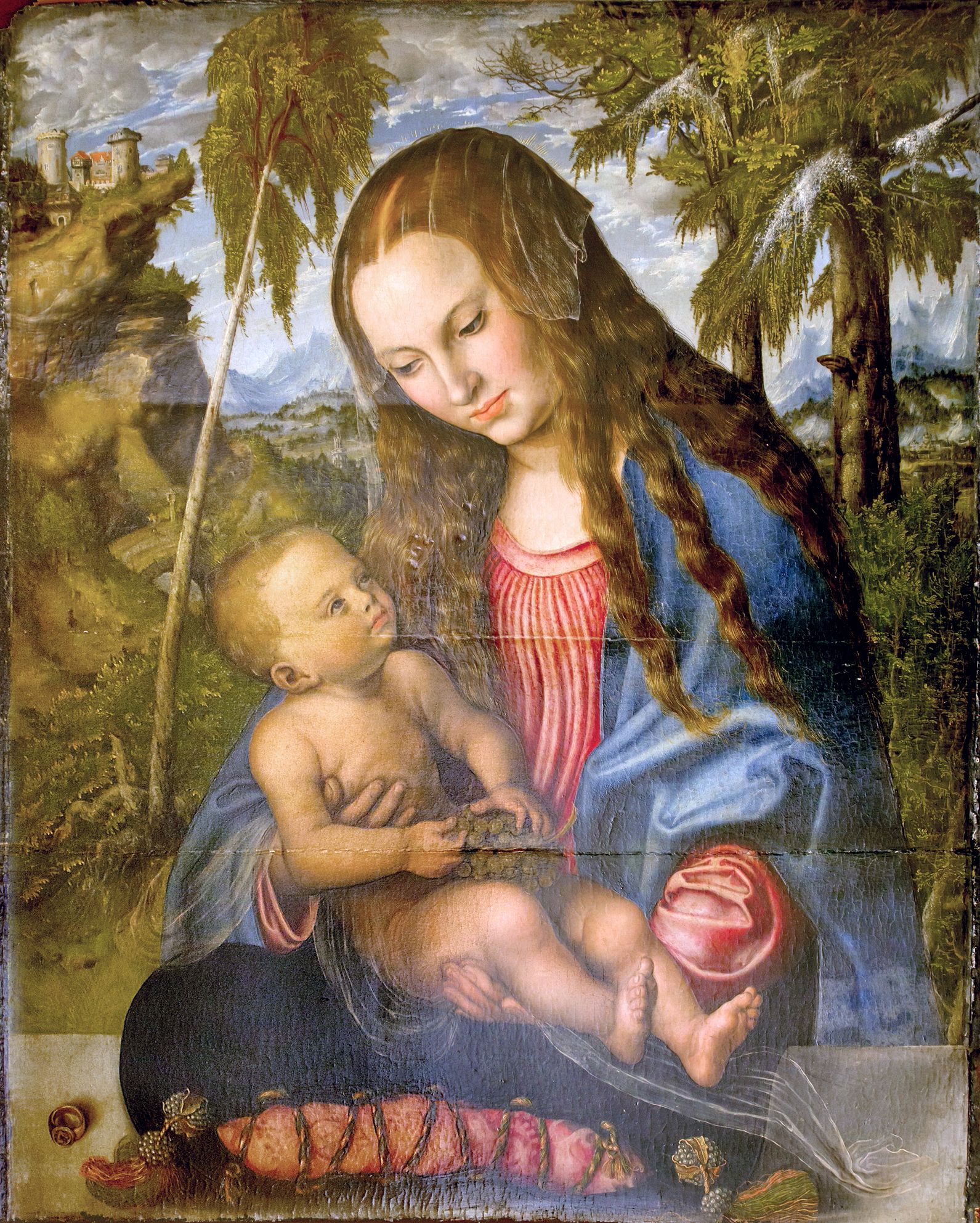 The "Madonna under the Fir Tree" of Lucas Cranach the Elder.