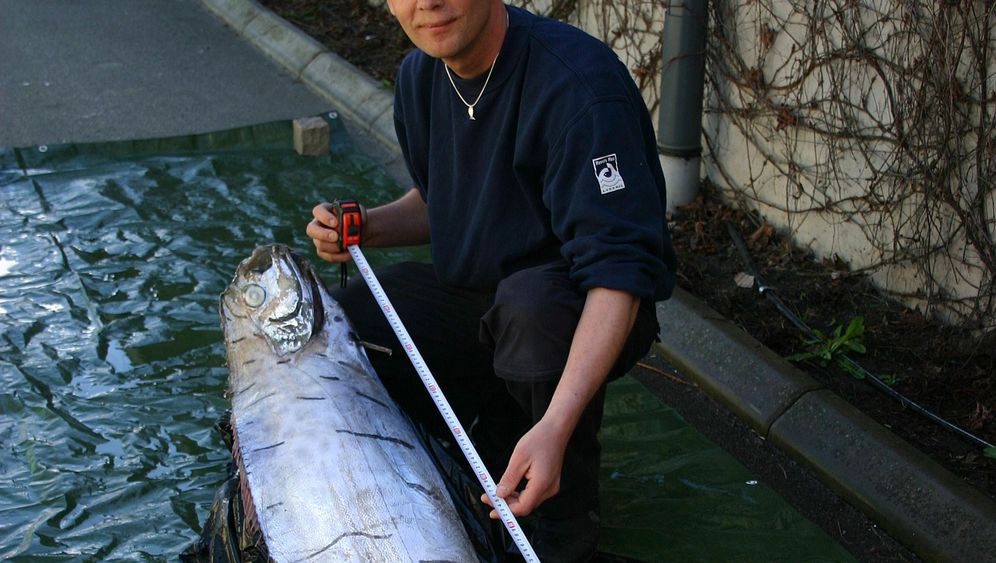 Some think they may be the origin of seafaring tales of ocean serpents. In Japan, sightings of the enormous fish in shallow water are seen as bad omens preceding an earthquake.

But in the waters of northern Europe, appearances of the giant oarfish, which can grow up to 12 meters (39 feet) in length, are exceedingly rare. Earlier this week, though, a hiker on a Swedish beach not far from the border with Norway came upon the 10-foot-long cadaver of a giant oarfish, also known as the king of herrings. It was the first time such a fish had been seen in Swedish waters in 130 years.

"At first, we thought it was a giant piece of plastic," Kurt Ove Eriksson, who found the fish, told the newspaper Svenska Dagbladet. "But then we saw an eye."

The giant oarfish is the longest living bony fish and can reach a weight of up to 300 kilograms (660 pounds). They generally make their home in more temperate waters and spend most of their time deep below the ocean surface, between 200 and 1,000 meters (650 to 3,280 feet) down.

'I Still Can't Believe It'

The fish found in Sweden was taken to the maritime museum in Lysekil. "It is unbelievable, I still can't believe it," a museum employee told the Swedish media.

Despite the rarity of giant oarfish sightings, the Swedish specimen is not the first to have ventured into the North Sea. In February 2009, two of them washed up on English beaches within weeks of each other.

"Very little is known about the life cycle of these magnificent creatures and it's a mystery why two of them should have washed up on our coastlines so close together," Zahra d'Aronville, a curator at the Blue Reef Aquarium in Tynemouth, where one of the fish was found, told the online publication Journal Live.

This spring, 10 specimens either washed up on Japanese beaches or were caught in Japanese fishing nets, prompting concerns that the archipelago was soon to be hit by an earthquake. Traditional lore in the country holds that the rarely sighted fish rise to the surface to warn of impending temblors.