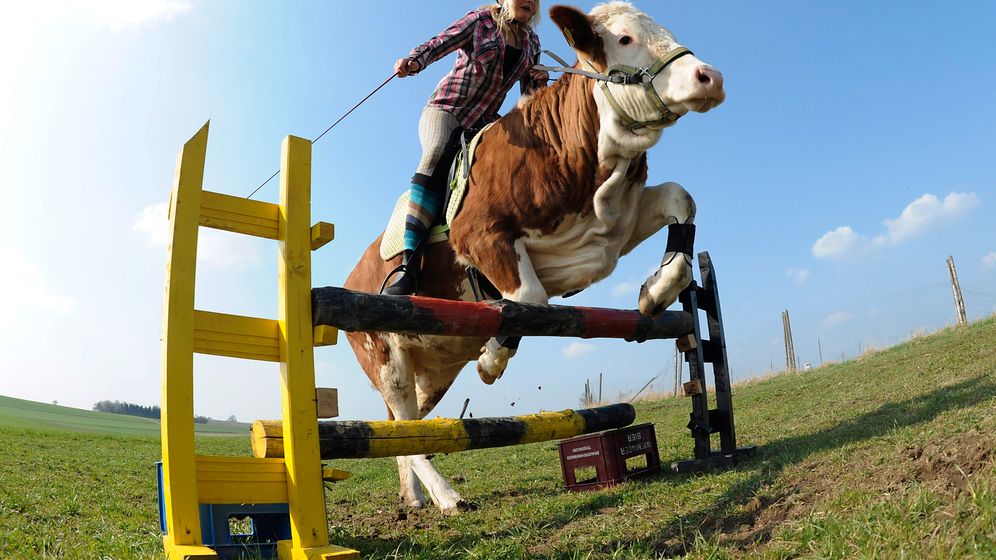 What to do if your parents refuse to buy you a horse? You make one, of course. Out of a cow.

That, at least, is the rather unusual route taken by Regina Mayer, a 15-year-old from the Bavarian town of Laufen. After months of training Luna, a cow Mayer found in the paddock of her family's dairy farm, Mayer can ride the bovine with little trouble. What's more, Luna has also proven adept at clearing makeshift jumps her rider builds for her.

"She thinks she's a horse," Mayer told the Associated Press.

Mayer began training Luna not long after she was born two years ago. Before long, she threw a saddle on the animal and began riding her. Now, commands such as "go," "stand" or "gallop" are no problem for Luna. As long as she's in the mood, that is.

Mayer began creating small jumps for her uddered friend once merely riding her became too boring. "I had to show Luna everything and to bribe her with carrots and sugar," she told the German news agency DPA. "Now she can jump over 1 meter (3 feet)."

Advice from the 'Cow School'

Luna was not Mayer's first attempt to train a cow. Not long after her parents declined to buy her a horse, Mayer -- nine years old at the time -- tried her hand at coaching a calf she called Lilly. But Lilly refused to cooperate and the project had to be abandoned.

It quickly became apparent that Luna was different. Mayer says that she was largely cooperative from the very beginning. Now, the cow prefers to spend her time with horses. "Luna is constantly following the horses around, but the horses don't seem to be interested." The other cows in the stall appear not to like Luna, and even kick her now and then, says Mayer.

Despite the relative rarity of Mayer's hobby, it certainly isn't unheard of. Indeed, when she began training Luna, Mayer called a "cow school" in Switzerland for tips on training cows. The school is located in the small town of Adliswil, not far from Zurich, and it trains cows to do all manner of tricks, including clearing jumps and even rolling out carpets with their noses. She also spoke with the local veterinarian, who ensured her that jumping is not dangerous for Luna.

Mayer says that her friends made fun of her new hobby at first. But now, they all want to take a ride on Luna. "But only my best friends are allowed to," she says. And soon, she may be getting what she wanted all along. Her parents have said they plan to get her a horse.