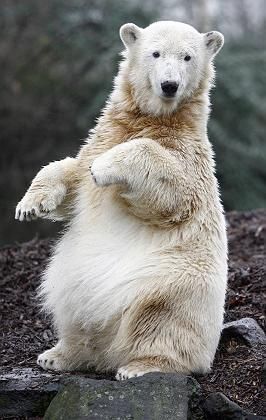 The on-screen version of Knut will be every bit as friendly as the real-life Knut.

It was only a matter of time before Tinseltown came knocking. Cute Knut is about to star in an animated film that should earn Berlin Zoo millions of euros and establish the shaggy polar bear cub as an A-list celebrity alongside Brad Pitt and Tom Cruise.

The zoo has confirmed local media reports that it is in talks with a Hollywood producer. "We are delighted about the interest from Hollywood. It's unclear when we will sign the contracts. Some details have yet to be sorted out," zoo director Bernhard Blaszkiewitz told Bild am Sonntag newspaper.

Berlin tabloid B.Z. reported that Ash R. Shah, the producer of animated films including "Garfield's Fun Fest" and "Garfield Gets Real" about the cheeky ginger cat, has approached Berlin Zoo with a €3.5 million film deal.

Media reports said the film is to be set in Berlin Zoo and that Knut's keeper Thomas Dörflein will also feature in the plot.

The zoo's negotiators have made sure that the on-screen Knut will be every bit as friendly as the real-life Knut, who still likes to play with Dörflein even though he now weighs more than 100 kilos and sports an impressive set of teeth.

Media speculation that Knut may eventually eat Dörflein has so far proved unfounded. The two seem inseparable. Dörflein hand-reared Knut after his mother rejected him when he was born 13 months ago, feeding him porridge, burping him and sleeping next to his cot -- a wooden box lined with fur.

The film will also address the fate of Knut's brethren living in the wild as global warming threatens their Arctic habitats, Berlin newspapers say.