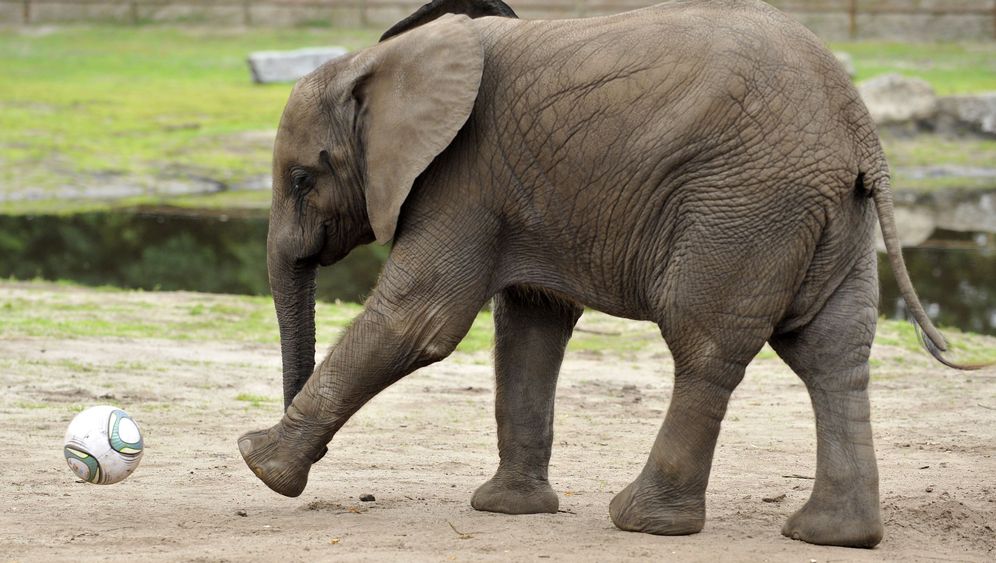 It started by chance. Two zoo employees at Germany's Hodenhagen Serengeti Park were playing football on their afternoon lunch break when the ball went bouncing onto Nelly's turf. Without hesitation, the young female elephant gave the football a hefty kick. The Women's World Cup was only four weeks away -- not enough time to get Nelly in shape to support Germany on the field. But zoo staff saw other potential for Nelly's talent as the country's new football oracle.

Fans of the late Paul the Octopus might be loath to replace the unlikely star of the 2010 World Cup. But the death of the famous cephalopod -- who correctly predicted the outcome of eight matches during the tournament -- left a void that a number of other zoos and aquariums have since been trying to fill.

Nelly has taken the lead in the competition, correctly predicting the winner of every German match in the ongoing Women's World Cup, including the host country's stunning loss to Japan on Saturday. On Tuesday, the pachyderm prophet made forecasts for Wednesday's semifinals, predicting that Sweden and France would win their respective matches against Japan and the US to face off in Sunday's final.

"Some days she isn't in the mood for football but other days she gets really enthusiastic: Her ears perk up, she raises her trunk, trumpets and runs so excitedly that the trainers on the field with her have to really watch out," zoo spokeswoman Juliane Gunkel told SPIEGEL of Nelly's flair for football.

To divine a game's outcome, Nelly shoots on two goals marked with national flags representing the competitors in the upcoming match. The team whose goal she scores on can expect defeat on game day. In predicting German matches, Nelly had always scored on the opposing team's goal -- until last Friday, when she scored on her home country's goal, to the dismay of her German followers.

Nelly's caretaker and football trainer, Sebastian Teske, has to stay aware when he hits the pitch with Nelly. At 480 kilograms (1,058 pounds), the 18-month-old African Elephant is a bit bigger than the average footballer -- and can do a lot more damage than Paul the Octopus ever could in his Oberhausen tank. "She's mostly interested in the goal, which she plays with using her trunk. Sometimes we have to be careful that she doesn't dismantle the playing field," says Gunkel.

A force to be reckoned with on the field, Nelly's soccer skills are particularly impressive because of her youth and the fact that she is an African Elephant. Her species is typically more difficult to manage than Indian Elephants, explains Gunkel, and one as young as Nelly is especially tricky: "Our elephant trainer says that it's surprising that she has learned so quickly at such a young age. She really has a true talent."

Whether she can continue her winning streak will be revealed Wednesday night when France faces off against the USA at 6:00 pm (CEST) and Japan takes on Sweden at 8:45 pm. If Nelly's football fortuntetelling is right yet again, Sweden and France will come away winners and play against each other in Sunday's final.

Although most employees at the Hodenhagen zoo will have left work by the time tonight's first game kicks off, Gunkel expects that many of them will be watching the game from home to see if Nelly's psychic powers prevail. As for the elephant's future in football forecasting, Gunkel can't be certain: "It all depends on the animal. If she continues to have fun with it, we will do it in the future."