German Bundesliga soccer club Schalke 04 has received more than 100 complaints from Muslims about its club song which contains the verse: "Muhammad was a Prophet who knows nothing about football." 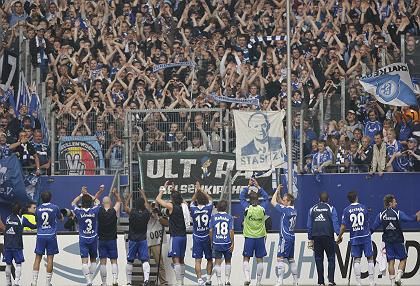 Schalke supporters are among Germany's most emotional fans.

The song with the title "White and Blue, How I Love You" has been around for decades but only recently came to the attention of Turkish media which said it insults the Prophet.

Muslims are now demanding that the offending line be struck from the song, which is chanted by Schalke's fans before every match.

The management of the club, based in the western town of Gelsenkirchen in the industrial Ruhr region, is concerned about the complaints and says it is consulting an expert on Islam.

It's unclear why the song contains the reference to Muhammad given that the rest of the lyrics focus on the beauty of the team colors white and blue and on the fact that Schalke will never die.

"The song is age old. Both sides should sit down and discuss this, we're all sensible people," Schalke's former manager Rudi Assauer told the mass circulationBild newspaper.

Shalke has established itself as one of the dominant clubs in the German football in recent years, capturing the German Cup two years in a row in 2001 and 2002. It earned second place in the Bundesliga in 2001, 2005 and 2007, allowing the team to compete in the Champions League.