Titanic, the German satire magazine, is never far from polemics, but its latest action takes its reputation for controversy to new heights: It is staging a Muhammad look-a-like competition -- and has invited the Turkish President Abdullah Gül to take part. 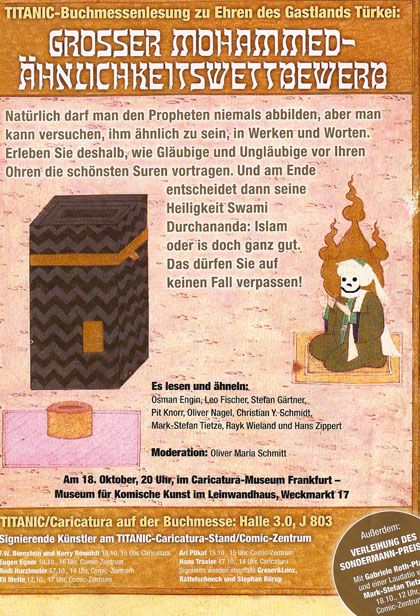 A drawing submitted to "Titanic" as part of its Muhammad look-alike contest.

Turkish newspapers were quick to react to the "unbelievable competition," which is to be held parallel to the Frankfurt Book Fair, where Turkey will be the guest country this year. The popular Turkish daily Sabah drew parallels with the infamous Muhammad cartoons published in Denmark's Jyllands-Posten newspaper in 2005, which sparked death threats and protests across the Muslim world, with some escalating into violence.

According to its Web site, however, Titanic is going ahead with its look-alike contest: "Come along to the most dangerous event of the Frankfurt Book Fair ... It will be a blast," it wrote. The competition, to be held on Oct. 18, is set to take place on a specially built stage at the state-funded Caricatura Museum in Frankfurt. Achim Frenz, head of the museum, said it was designed to test of the boundaries of "jokes and fun." The museum's Web site comments: "Of course it is a sin to represent the prophet. For this reason, we are trying to do something exceptional."

During the competition there will be readings from the Koran and participants will be encouraged to mimic the Muslim prophet. "Of course you can never create a picture of the prophet," the magazine claims in a flyer advertising the event, "but you can try to emulate him."

Titanic, the German equivalent of Britain's Private Eye, has a track record of inflamatory stunts, including hoax bribery faxes sent in 2000 to delegates of the FIFA soccer world championship committee, urging them to support the German bid for the 2006 World Cup. In return for their votes, Titanic offered gifts of a cuckoo clock and Black Forest ham. Titanic also founded its own political party, Die Partei (the party), which lists the rebuilding of the Berlin Wall as one of its goals.

Correction: In an earlier version of this article, SPIEGEL ONLINE reported that Turkish satirist Osman Engin planned to participate in the competition. This is not the case, and we apologize for the error.