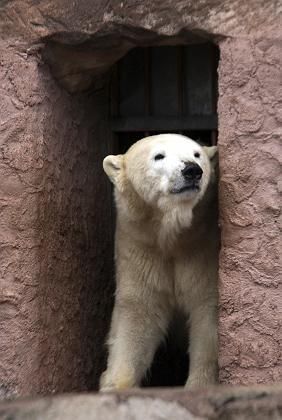 "Vera," one of two polar bears who gave birth to cubs in Nuremberg Zoo, looking out of her cave last Saturday. Her cub is still alive, the Zoo says. The two cubs born to "Vilma" are dead.

Two polar bear cubs have died in a zoo in the southern German city of Nuremberg, days after the zoo said it was prepared to let them die rather than hand-rear them like Knut, Berlin Zoo's world-famous cub.

Nuremberg Zoo said polar bear Vilma had probably eaten the two cubs, born five weeks ago. "The cubs probably died after contracting a disease," the zoo said in a statement released on Monday. "Predators are known to eat their offspring if there is something wrong with the cubs or the surroundings make a successful upbringing unlikely."

It said a third cub, born to polar bear Vera, was spotted by a visitor on Sunday and was "still in the best of health."

The deaths provoked fierce criticism of Nuremberg Zoo and followed media reports that the mothers weren't looking after the cubs properly.

The German Animal Protection Society said the zoo had acted irresponsibly. "Polar bears shouldn't be held in zoos because they can't be kept in conditions appropriate to the species," the society's director, Thomas Schröder, said in a statement.

"But it should be clear that zoos are responsible for the lives of all the animals in their care. It was the ethical responsibility of the management to give the polar bear cubs a chance of life. Using the argument 'That's Nature' as an excuse for intervening far too late is cynical and inappropriate."

The zoo's deputy director, Helmut Mägdefrau, had told SPIEGEL ONLINE on Friday that the zoo had a strict policy of non-interference with the polar bears and that "if something goes wrong, it goes wrong." He said Nuremberg was determined to avoid the "Knutomania" that had followed the birth of Berlin's Knut, hand-reared from birth after his mother Tosca rejected him.

The zoo said it had planned to check up on the cubs for the first time at the end of this week, six weeks following their birth, in accordance with the European Endangered Species Program (EEP). But a keeper decided to go in to the cave and take a look after Vilma started scratching at the entrance to her breeding box.

"Until this morning everything was quiet and totally inconspicuous," the Nuremberg Zoo statement said. "The cubs weren't hungry because one would have been able to hear their cries if they had been. We assume that Vilma took excellent care of her cubs until the end."

The remains of the cubs have not been recovered because no keeper has been able to enter the breeding area where Vilma kept her cubs. It's possible their little carcasses are lying under some straw.

Nuremberg Zoo must now brace for a storm of media criticism. On Monday, before the deaths were announced, mass circulation daily Bild Zeitung ran a story on them under the headline: "Why Won't Anyone Save the Cute Baby Knuts in Nuremberg Zoo?"