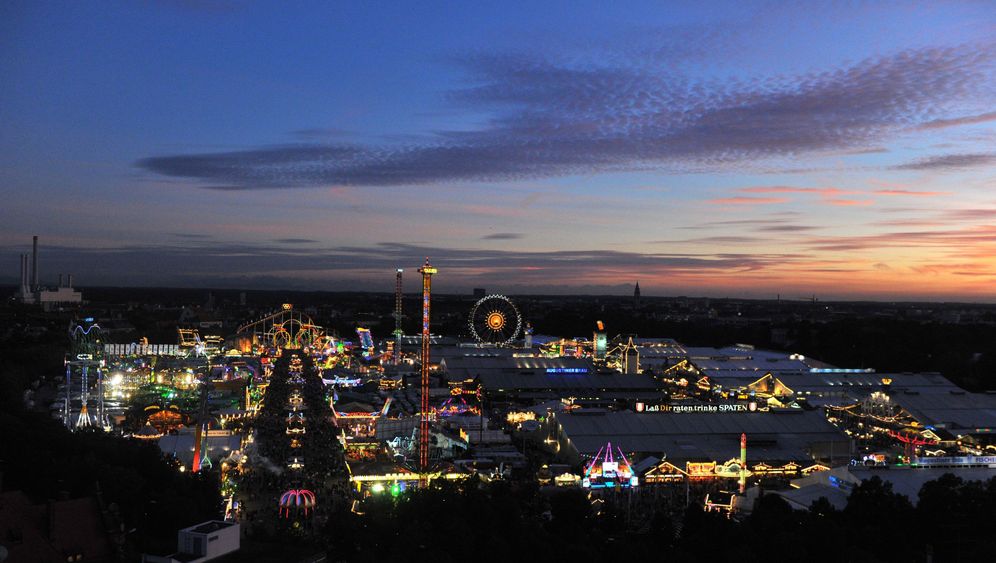 Photo Gallery: The Charms of the World's Largest Folk Festival

It was, it seemed, a perfect day to head out to Oktoberfest. The sun was shining, the city was dressed in Lederhosen and Dirndls and the festive mood from the Wies'n seemed to permeate all of Munich. A nice frothy Mass, that one-liter mug of joy that Oktoberfest is known for, seemed like just the thing.

But it wasn't long before the pleasurable anticipation gave way to grim reality. Though it was only just past noon, the beer tents -- all of them -- were full, the doors closed. Thirty minutes of winding through jam-packed outdoor tables later, two seats appeared wedged between a young man who had gently laid his forehead on the edge of the table for a snooze and a group from Italy trying their hand at Bavarian beer drinking songs. Before long, the sleeping reveller puked on my wife's shoes. Thirty minutes later, he woke up and proposed to her.

Ask most people in Germany, and this is the kind of experience that they most often associate with Oktoberfest. Each year, the two-week long event attracts over 6 million party-goers -- last year it was just short of 7 million -- and a significant number of them spend much of their time drinking beer. In 2011, visitors consumed an all-time record of 7.5 million liters of the stuff. The world's largest folk festival has become synonymous with drunks, who are locals and tourists alike.

Not surprisingly, Oktoberfest's reputation has suffered. Even as copy-cat festivals continue to sprout up around the world, wariness of the original also seems to have spread. Fights are not uncommon, stepping over drunks on the way to the subway is routine, the city streets surrounding the party site are often littered with broken glass and worse, and theft is, if not rampant, then certainly problematic. It has become de rigour in many parts of Germany to haughtily dismiss Oktoberfest as the realm pre-alcoholic, post-teen men and overly patriotic Bavarians.

Don't Give In to the Negativity

But that is a tragedy. When Munich's mayor taps the first keg this Saturday at noon, it will mark not only the beginning of the world's largest bender, but also of the globe's most fantastic folk festival. Giving in to the negative hype and not going would be a terrible mistake.

Walking onto the festival grounds on a day when the weather gods have seen fit to withhold the rain is enough to banish all misplaced cynicism. Tens of thousands of people wander among the rides, the carnival games, food stands and beer tents. The sheer size of the happening is enough to fill any first-time visitor with awe. Preparations and construction on the 14 beer tents, dozens of rides and myriad food stands begin several weeks before the gates are opened.

More to the point, however, it becomes instantly clear that Oktoberfest is more than just a party -- it is a bona fide folk festival. Locals are almost all decked out in their Bavarian finery of lederhosen and dirndls and families are more numerous than shirtless Australians and reeling Americans. Companies in Munich often give their employees time off to enjoy the proceedings and calling in sick with a hangover is an accepted practice. A crash course in Bavarian prior to a visit is, if not absolutely necessary, certainly helpful.

The beer tents, of course, are where the real action is and getting there by lunchtime is practically a must on most days to get a seat. Once inside, it quickly becomes difficult to believe that some would prefer to stay away. The atmosphere early in the day is relaxed, the music coming from the brass bands is traditional and the roast chicken is irresistible. Before long, even the most hard-bitten cynics can't help but climb up on a bench (dancing on tables is frowned upon) and belt out the lyrics of newly learned folk song. And it's not just the alcohol singing.

Even if you don't find a spot inside one of the tents -- despite their being room for over 100,000 people to sit down and drink beer at one time, it isn't always easy -- sitting outside can be just as fun. While my wife didn't accept the post-regurgitation marriage proposal, before long we found ourselves singing and dancing together with our newfound friends. And as we streamed out of the gates later that evening, we didn't even notice the broken glass.