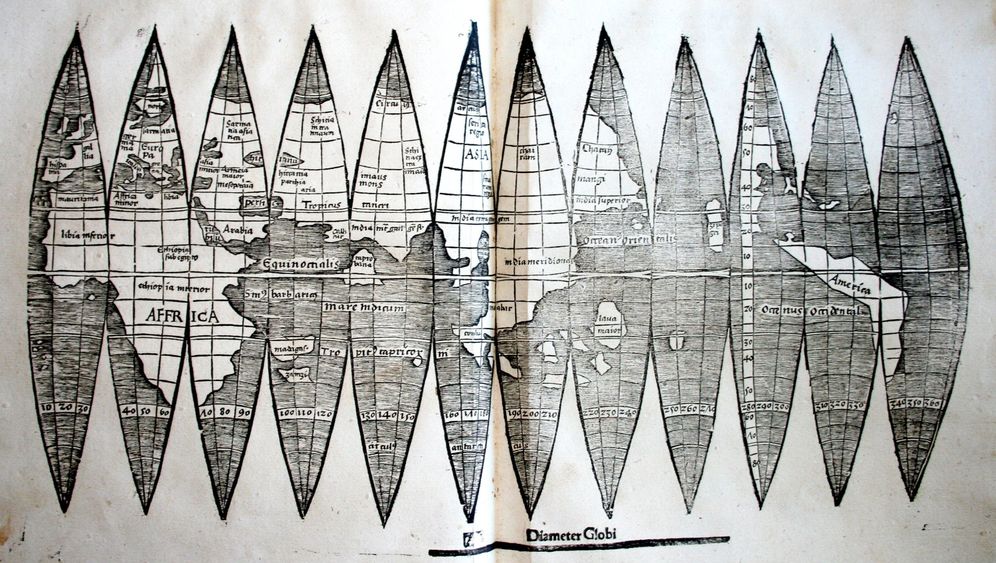 Reseachers at the Munich University Library announced Tuesday they had discovered a long forgotten version of a map of the world by German cartographer Martin Waldseemüller. Library director Klaus-Rainer Brintzinger said that two researchers had discovered that the valuable, 500-year-old map had been erroneously bundled together a few hundred years ago with volumes on geometry.

Researchers believe the map is a smaller global map created by Waldseemüller, who lived from 1470-1522, and became famous for a three-square-meter world map he drafted. That work is often referred to as America's "birth certificate," because it is the first map to describe the New World as "America". Indeed, Waldseemüller helped to establish "America" as the name of the newly discovered continent in honor of the expeditions made by Italian sailor Amerigo Vespucci.

In 2007, German Chancellor Angela Merkel gave Waldseemüller's large world map to the United States as a gift. At the time, the map was 500 years old, and Merkel described the it as "a nice symbol of the very close German-American friendship." Today it is part of UNESCO's world documents list and can be viewed at the Library of Congress in Washington. The Library of Congress notes that although Waldseemüller's work remained obscure for many years, "it presented a radically new understanding of world geography based on the discoveries of (Christopher) Columbus and (Amerigo) Vespucci." The map included data gathered during Vespucci's voyages to the New World and christened the new lands "America" in recognition of the fact that what Vespucci had explored was, in fact, a new continent.

Prior to the discovery of the smaller world map in Munich several days ago, only four versions were known around the world. Christie's auctioned off one of the maps for more than €800,000 in 2005. Sven Kuttner, who heads the old books department at the university library, told DPA that the map differs from previously known versions. He said its origins haven't been determined entirely but that it had probably been created some time after the first printing in 1507. The map had been printed from carefully carved wood blocks.

The version found this week had been misplaced for a few hundred years. Waldseemüller's work, as groundbreaking as it may have been, fell into obscurity for several hundred years. Kuttner noted that library officials at the time probably hadn't understood the map's significance. He said it had become a "sleeping beauty" until its discovery. "There hasn't been a discovery of this dimension since World War II," Kuttner said.