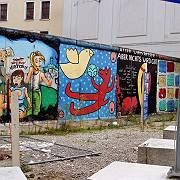 Tourists are having a tough time finding any remains of the Berlin Wall -- now another piece has gone missing.

An 18-meter strip of graffiti-covered Berlin Wall was secretly removed by government-contracted workers over the Easter break.

Erich Stanke, a 47-year old businessman who says he bought the panels of the wall from East German officials soon after the border fell in 1989, received a call to tell him his sections of the wall were missing, Bild newspaper reported.

"I was sitting in a cafe having breakfast on Good Friday when an acquaintance called and said, 'The wall has gone!,'" Stanke told the paper.

The Federal Civil Engineering and Planning Office had removed his panels, which had stood near Potsdamer Platz, the historic hub of the city, several newspapers reported on Sunday.

They said the sudden removal was necessary for the construction of a new environment ministry and that the wall fragments would be incorporated into the new building at a later date.

A spokesman for the Planning Office said it had seen no need to inform Stanke because, "according to the federal government and the federal court of justice, this segment of the Wall belongs to the state."

Stanke has been in a long-running ownership dispute about the wall remnants.

Tourists have a hard time finding remains of the Wall since there are scarcely three kilometers still standing. The longest segment, a 1.4 kilometer stretch, is located near Ostbahnhof station.