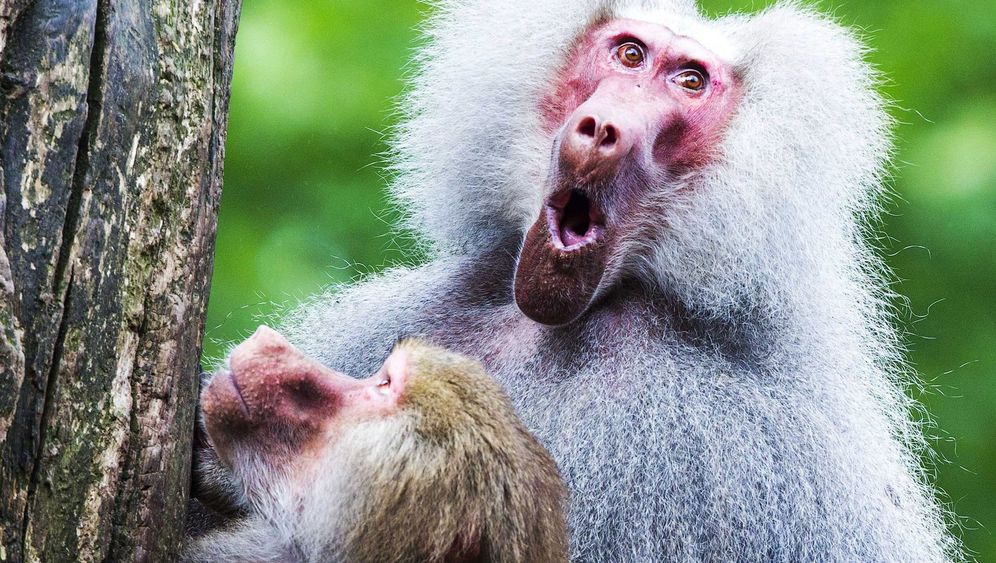 Zookeepers in the Netherlands are scratching their heads at the strange behavior of an entire colony of 112 usually boisterous baboons which have sunken into a collective depression, sitting motionless, not fighting or grooming each other and not even eating apples, their favorite food.

Traumatized and apathetic, they've also had their backs turned to zoo visitors, as if they're on strike.

"For us it's a mystery, it's the fourth time this has happened and we haven't got a clue what could have caused this," biologist Wijbren Landman, a spokesman at Emmen Zoo in the northeastern Netherlands, told SPIEGEL ONLINE. "If the leader is upset then the whole colony is upset. The leading men in the group were shocked by something. What it was we don't know."

It started last Monday when the baboons suddenly became hysterical. Then, on Tuesday and Wednesday, one group of baboons sat in a tree and refused to come down, while another group sat on an exposed part of the island in the burning sun. Fortunately, the second group later moved to a shadier location, but remained depressed.

"They didn't even come when the keeper came along with apples. Normally they'd beat Usain Bolt when we bring them apples," said Landman.

Usually the zookeepers bury food, such as grain, in the ground and the baboons dig for it like they do in the wild. Alarmed by their inactivity, the keepers placed the food above ground, but the primates ignored it.

Landman has heard a number of theories about possible causes. Some speculate the monkeys might have seen a ghost or a UFO. Others say earth tremors could have spooked them. Emmen occasionally experiences minor earthquakes, but none was recorded last week.

Another theory is that a visitor to the zoo might have worn a T-shirt with a picture of a lion on it. But if that were the case, the animals would constantly be going nuts.

"Some people suggested that maybe foxes or an escaped snake got close to them, but we're not missing any snakes," said Landman.

"This hasn't happened at other zoos. But it has been seen in the wild that baboons are upset for a few days after a confrontation with a predator. But we have no lions or hyenas on our baboon island."

Could it be that the colony has a very jumpy leader prone to depression? No, says Landman, because the group had a different main leader during the last incident, in 2007.

Whatever it was, Emmen's baboons are starting to overcome their trauma. "They are searching for food again and some youngsters are being punished by the older ones for indecent behavior," said Landman, sounding relieved. "It's their normal activity."