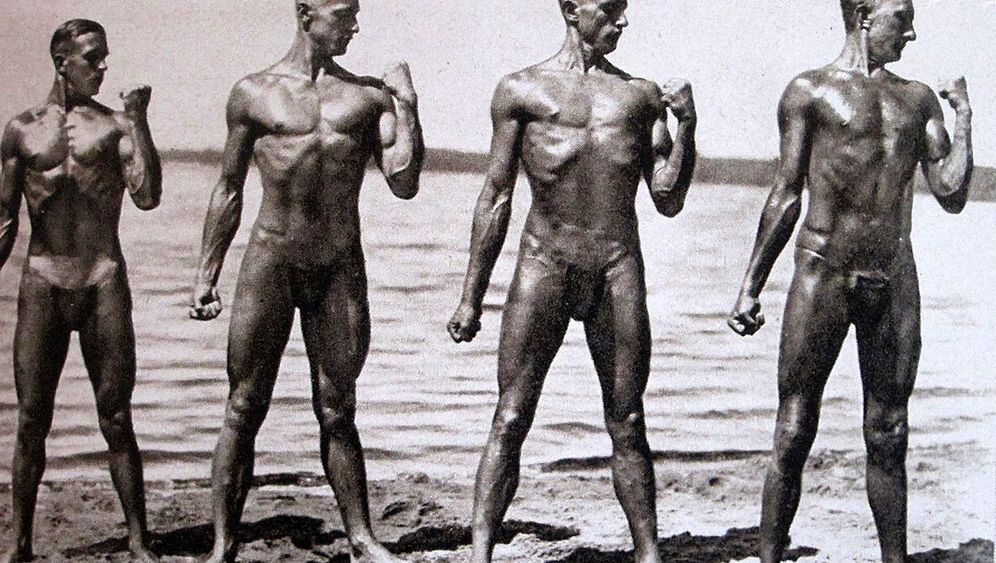 What did Germans read during the Nazi era? In search of the answer, author Christian Adam surveyed a total of 350 bestsellers from the 12 years of the Third Reich's existence -- making striking discoveries in the process. In addition to well-known propaganda books like Adolf Hitler's "Mein Kampf" and Alfred Rosenberg's "The Myth of the Twentieth Century," there were schmaltzy regional novels, science fiction, mysteries, love stories, joke books and cross-media marketed accompaniments to radio programs and films.

The rich variety of reading material likely arose because different censorship offices competed to have the last word on what books publishers could print, Christian says. The paradoxical effect is that some of the books printed seem surprising today. Perhaps the oddest of them all was Hans Surén's "Mensch und Sonne," or "Humans and Sun," a collection of nude photographs that includes lyrical praise of the male member, instructions for yoga-like exercises and even naked skiing.

It could be seen as a precursor to the sexual revolution and "Freikörperkultur (FKK)," or "free body culture" of the late 1960s, if it weren't so blatantly racist, researcher Adam told SPEIGEL ONLINE in an interview.

SPIEGEL ONLINE: Was 'Mensch und Sonne' simply overlooked, or was it ignored by Nazi authorities?

Adam: No, the opposite. The SS magazine Das Schwarze Korps (The Black Corps), advertized for Surén's book, even giving it an entire page in a pre-Christmas issue. In it they say: "We want a strong and joyful affirmation of body awareness, because we need it to build a strong and self-confident race." Nudity was seen partly as a means of encouraging the "health of the race." And if that also happened to serve the voyeuristic desires of readers, that was accepted.

SPIEGEL ONLINE: The foreword in the 1936 edition, written after some 80,000 copies had already been printed, says the book was strongly supported by the race policy agency within the Nazi party and protected as official party literature. But the first photo, titled "Greeting the Light," shows pairs of naked men gripping each others' legs. How is it possible that the Nazi regime persecuted homosexuals but allowed such photos to be published?

Adam: One has to look at a much larger context. Homo-eroticism is in the subtext of many male organizations, and naturally in male-dominated regimes like that of the Nazis. But back then it wasn't thought of as gay. This level of meaning was often simply suppressed because it didn't suit their self-perception.

Adam: At first nudists were suspicious to the regime, though not because of the free body cult. Instead it was because the practice wasn't official. There was not a prudish or anti-pleasure atmosphere, though permissiveness was always coupled with thoughts on race. But due to their willingness to be co-opted by the party, nudists achieved official state recognition fairly quickly. The greatest success of the movement was the 1942 "Police Decree for the Regulation of Bathing," which allowed nude swimming if it could be assumed that no one would see. In the Kaiser's days this was still forbidden.

SPIEGEL ONLINE: Isn't this relish for physicality difficult to reconcile with the discipline that characterized the Nazis, though?

Adam: The public perception of the book market between 1933 and 1945 is distorted. One thinks only of "Blood and Soil" in literature and propaganda. But as I systematically looked at which book titles sold more than 100,000 copies, there were a few surprises. "Mensch und Sonne" is nothing special in itself, there had been a number of books on nudist culture since the 1920s. But new to me was not just that such books were very successful during this time, but that they also enjoyed the support of the authorities.

SPIEGEL ONLINE: The book states that, "the love life can never be tied to marriage alone," and that, "in the past the biggest personalities held as little regard for religious and middle-class values as the masses." It also says that "free sexual love is therefore accepted in a way similar to how it was among the Germanic forefathers." Was society during the 12 years of Nazi rule more accepting of pleasure than during the administration of Konrad Adenauer, West Germany's first postwar chancellor?

Adam: Historian Dagmar Herzog showed in her book "Sex after Fascism: Memory and Morality in Twentieth-Century Germany" just how contrary the actual sexual liberalization was to the conservative appeals in official statements. The youthful sense of romance did exist, but otherwise women gained a new self-confidence as they were forced into traditionally male roles because men were fighting on the front lines. Within the regime there were strong anti-middle class and anti-clerical impulses. During Adenauer's time, the prevailing sexual morality was much more conservative because people equated the Nazi horrors with a lack of moral restraint.

SPEIGEL ONLINE: Some of the photos are reminiscent of 1950s pin-ups that had to be sold under the counter until the sexual revolution of the 1960s.

Adam: Yes, we're familiar with a similar aesthetic of the perfect body from other Third Reich artists such as Leni Riefenstahl and her high divers in the Olympics films. In the 1930s such pictures didn't just hold the promise of freedom. They also held thoughts of breeding -- the body as a breeding tool that must be properly trained and fed like a race horse. With Surén the delight in the body is strongly characterized by racism.

SPIEGEL ONLINE: Some pictures of strong women shooting arrows or throwing spears seem to be a precursor of Helmut Newton's aesthetic. A number of bestsellers from the Nazi era were also popular after the war -- was this book one of them?

Adam: No, it wasn't a coffee table book, but an illustrated work of non-fiction, the text of which would have been in dire need of cleaning up. Not much would have remained. Surén constantly quoted Alfred Rosenberg, Goebbels, and Hitler … It couldn't be saved.

SPIEGEL ONLINE: Was Surén held in high regard by the Nazi regime?

Adam: Yes, ahead of the 1936 Olympics he was named the special agent for physical education to the leader of the country's farmers.

SPIEGEL ONLINE: That's hard to imagine when reading his flowery praise of the "sun-browned member" and his eulogy of the "sack pulsing with blood and both small egg-shaped testicles." Along with this passage he also presents himself in four images where he appears naked and heavily oiled.

Adam: Yes, and he undertakes the singular task of alluding to the Germanic Odal rune with the word "Hoden" (testicles), to somehow bring it in line with official propaganda. His oiled body has a rather modern effect -- done in the style of today's body building. But this passage about the testicles almost foreshadows how untenable Surén later became for the regime. In 1942 he was kicked out of the Nazi party and arrested. Allegedly he masturbated in public. 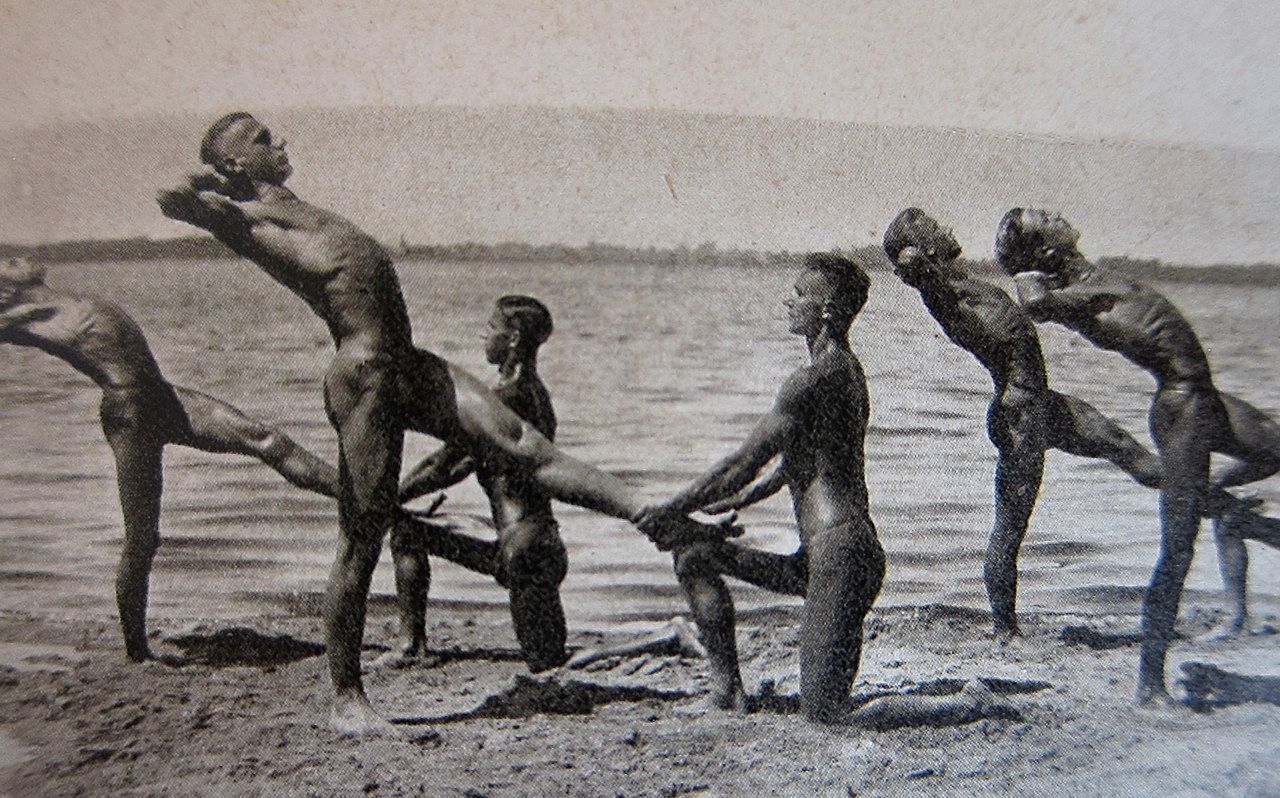 The first photo in the book is entitled "Greeting the Light," and shows eight nearly-naked men on a beach doing stretching exercises.