Michael Fröhlich, a German dealer in classic cars, has sold John Lennon's Mercedes 600, Marlene Dietrich's Rolls Royce Cabriolet and Charlie Chaplin's Bentley S3 in his time but has just arranged his most unusual deal yet -- a five-ton armored limousine that, he says, was used by Adolf Hitler.

Fröhlich, 59, told SPIEGEL ONLINE that he managed to trace the vehicle to a collector in northern Germany on behalf of a Russian investor willing to shell out millions of euros for the open-top vehicle, one of several that supposedly ferried the Führer through adoring crowds before and during World War II. 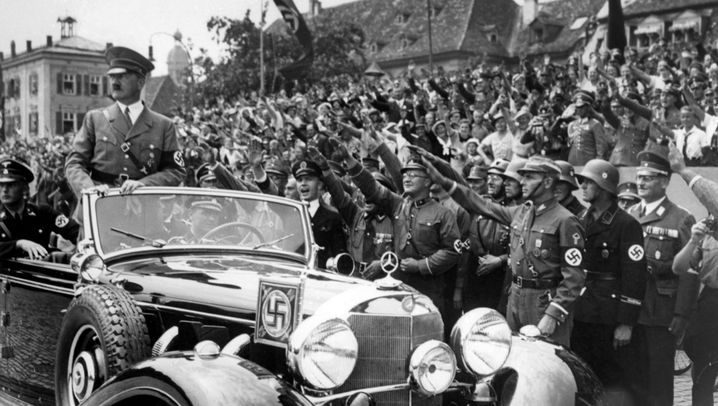 The bluish-black Mercedes 770A Kompressor delivered in 1935 has changed hands a number of times in recent years. It is being sold together with five other vehicles of the same rare model, four of which were owned by top Nazis including Foreign Minister Joachim von Ribbentrop. The other one belonged to a former president of Turkey, Ismet Inonu.

The unnamed Russian buyer is purchasing them all for a double-digit million euro sum, Fröhlich said. "I was of two minds about tracking down the car of this shit Hitler. Most of my relatives died in the war and I was saved by the Americans in the Berlin airlift, they supplied penicillin which I needed because I was suffering from tuberculosis," he said. "The vehicle disgusts me, I have to say."

The Hitler limousine alone is estimated to be worth between €4 million and €10 million euros ($6-15 million), according to one media report.

'Car May Be Cursed'

"The previous owners all died, it's a bit like the curse of the pharaohs," Fröhlich said. After the war the limousine was bought by the owner of the Imperial Palace hotel in Las Vegas and took pride of place in his personal collection. After his death, it went to a Bavarian collector, who died last year at age 49, said Fröhlich.

The six cars now being sold all ended up in the collection of a car fan in northern Germany. He is still alive.

"I got a call two months ago from a Russian investor who had found out that the car was no longer in the Imperial Palace collection," said Fröhlich. "So I spent weeks digging around and found it on Saturday. The buyer flew in straight away. I brought him and the collector together." The deal has yet to be finalized.

Fröhlich said he had seen original documents for the limousine including the log book which states that it was delivered to the "Führer and Reich Chancellor" in 1935 and that it broke down once in 1939 with an engine problem.

"It has slight traces of wear and tear but is still in great condition and can be driven," said Fröhlich. "It was the top of the Mercedes range at the time."

The car has 18 millimeter thick armor plating, 40 mm bullet-proof glass and a 400 horsepower engine capable of reaching speeds of 180 kilometers per hour. "It's my most unusual deal ever, by far," said Fröhlich, who has been tradling in historic cars for 30 years.

He said he had studied vintage photos showing Hitler in various vehicles and had detected a car with the same number plate: 1A 148461.

Hitler Had no Driver's License

Number plates can, of course be forged. Josef Ernst, the spokesman for the heritage department of Daimler, the company that manufactures Mercedes vehicles, told SPIEGEL ONLINE: "We don't know if this vehicle is authentic, one would have to look at it first. Assuming it's genuine, one has to add that there is no single car that can exclusively be called the Adolf Hitler vehicle. He had a range of official cars, all ordered by the Reich Chancellery rather than by him personally."

Ernst said he didn't know how many vehicles Mercedes delivered to the Reich Chancellery. He said the company built a total of 88 vehicles of the Kompressor 770 range between 1938 and 1943.

"As far as I know Hitler had no driving license and never drove himself," said Ernst. He had three chauffeurs.

Roy Spencer, a California-based dealer in classic Mercedes cars, told SPIEGEL ONLINE: "They're fabulous cars. The 770 was the pinnacle of automotive design in the late thirties. Opulent and with everything done on a grand scale. They have value and a following in themselves.

"The Hitler and Third Reich connection can be a mixed blessing for the cars. I'd say it would rule out a high percentage of potential collectors who have an intrinsic interest in a milestone, unique, special-coachwork, low-production 770."

Meanwhile, Fröhlich appears to be relieved that his mission is over and that he can devote his attention to cars with happier histories, such as his own private collection of 50 vehicles, including a tank, all built in 1950, the year he was born.

"They're like my brothers," said Fröhlich, who drives around his home town of Düsseldorf in a charred Rolls Royce that got incinerated when his shop burnt down four years ago.