Soon, even the afterlife won't be able separate diehard fans of Schalke 04 from the beloved German Bundesliga football team. A company is creating an area this autumn for fan graves overlooking Schalke's Veltins Arena in the city of Gelsenkirche in the Ruhr Valley, ensuring that fans can still be a part of the football fun even long after their deaths.

Local real estate agent Ender Ulupinar, 39, is heading the newly created company that will establish and maintain the burial plots starting this fall for fans of the team, which is nicknamed Royal Blue. FC Schalke 04 officials say they will not make any money with the burial area -- which is to be located within the city's larger Beckhausen-Sutum cemetery -- and that they do not want to do "business with death." Still, that hasn't stopped fans from lining up to secure burial plots.

In a interview, Ulupinar says that football fandom may not be a religion but that it is not far off.

SPIEGEL: Last Friday, the foundation stone was put down for an area of graves set aside for Schalke fans in the cemetery near the football stadium. The project recalls the tradition of communal graves for monks and nuns, so that they could remain connected to the faith beyond their graves.

Ulupinar: Don't come to me now with the idea that Schalke is like a religion. That's not true. What is true is that fans identify with this professional soccer club in a special way. I myself was an amateur in business at the start of the 1990's when Schalke regained its first tier (Bundesliga) status. I have been a fan since birth.

SPIEGEL: And now you are tying your Schalke fandom with your business?

Ulupinar: I studied real estate business administration and my wife runs a cemetery gardening company. Together with a group of colleagues we have built five community graves since 2008 -- park facilities, cemetaries within cemetaries. The demand for such burial places is growing and they are cost effective and easy to take care of. We have been in contact with Schalke 04 since 2007.

SPIEGEL: The planned site looks like a stadium, with the team emblem in the center circle. Do you believe that there is a need for a communal resting place in such an atmosphere?

Ulupinar: It is a symbol like the ones that already exist in graveyards. If you go to cemeteries in the Ruhr Valley you will see many mining symbols and even some football ones: some with season tickets on the grave stones. There are also coffins in the Schalke team colors.

SPIEGEL: There will be precisely 1,904 burial plots in your field -- in homage to the year in which the club was founded. How much will a grave cost?

Ulupinar: They start at €5,406 ($6,639), including 25 years of grave maintenance. Schalke 04 doesn't earn anything from that. With the approval of the foundation, "Schalke Hilft!" ("Schalke Helps"), I assume the costs of a contractually bound number of burial plots for fans whose families and relatives are in need.

SPIEGEL: Have there are already been preorders? 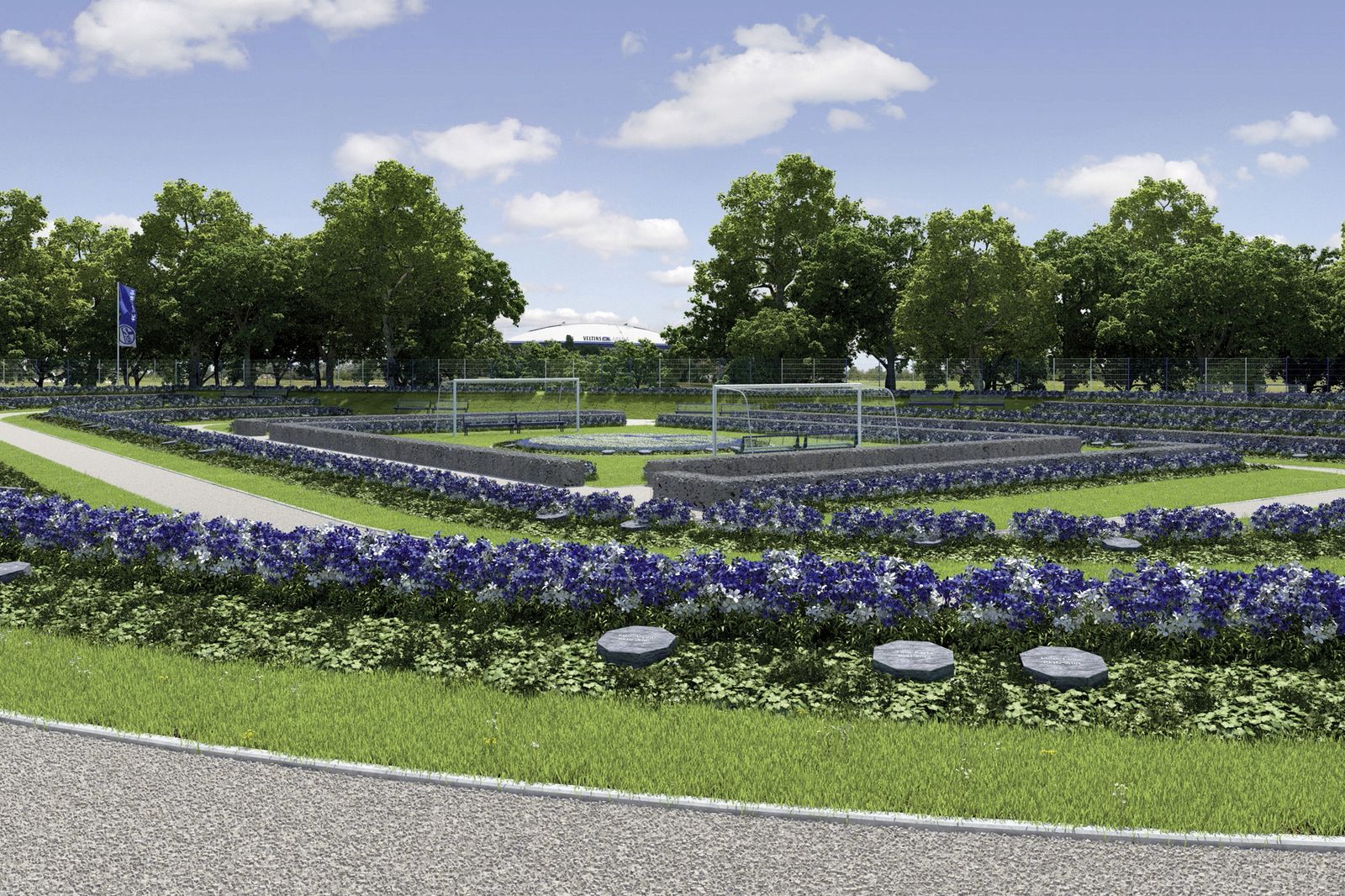 The afterlife in shades of blue and white: Fans of German football club Schalke 04 will soon be able to rest in peace among their own fans in a newly built cemetery.