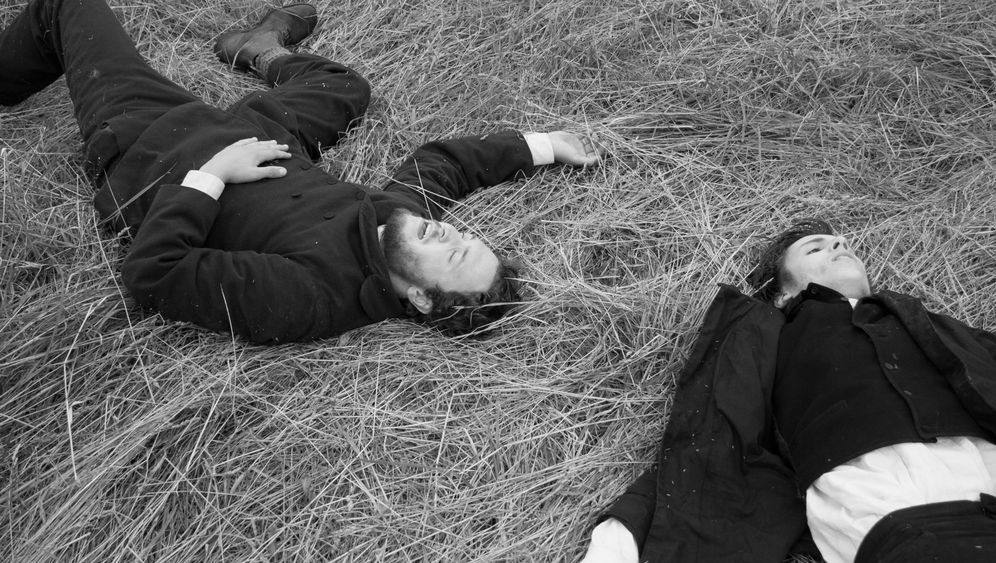 Edgar Reitz is wearing a cap when he walks into the offices of his film production company in Munich. He keeps it on inside, even when he talks to his assistant or his son, who is also his partner in the firm, Reitz & Reitz Medien. Only when he sits down for a conversation does he remove it, pointing out that it's padded on the inside. "I have a problem with my retinas," he says. "My spatial recognition has declined, which is why I sometimes bump into things."

He says this casually, probably because he can cope with the impairment. It's important to him, he says, to move more slowly now than before. He has adjusted to a new pace of life.

Reitz is 80. His speech and thoughts are as clear as ever, and he still has a lot of energy, which he needed to complete his new, monumental film "Die andere Heimat" ("The Other Home").

It's a continuation of sorts of his massive trilogy, "Heimat -- Eine deutsche Chronik" ("Home - A German Chronicle), an 11-part series that was broadcast on TV in 1984. It was a great success, attracting up to 11 million viewers. SPIEGEL wrote a cover story about it, and the entire country was astonished that someone had the confidence to tackle the subject of home and the homeland, which is particularly difficult for Germans.

"Die zweite Heimat -- Chronik einer Jugend" ("The Second Home -- A Chronicle of Youth) aired in 1993, and "Heimat 3 -- Chronik einer Zeitenwende" ("Home 3 -- Chronicle of a Turning Point") in 2004. There were also other, smaller "Heimat" films before and after the trilogy. In total, the project generated almost 60 hours of film, which consistently revolved around people who live in the Hunsrück region or, like Reitz, were originally from there. More than 25 million viewers in Germany alone have seen the "Heimat" films, which have also been broadcast in more than 30 countries.

The films drew attention to the Hunsrück, a relatively unknown rural area between the cities of Koblenz, Trier and Mainz. Nowadays, tourists travel to the Hunsrück because of "Heimat," which is why parts of the set for the new film in Gehlweiler, where it was shot, have been left standing. In fact, panels with explanations in different languages are currently being installed. There are people in the Hunsrück whose lives have changed as a result of the "Heimat" films. Former nurse Helma Hammen is a typical example. She began helping out during the filming of the series in the early 1980s. Since then, she has cast many of the actors, and she also leads guided bus tours through the Hunsrück.

The German premier of the film on Sept. 28 also took place in the Hunsrück. Simmern, the district seat of the Rhein-Hunsrück administrative region, along with the local Pro-Winzkino theater, had a festival in its honor. Booths scattered around the town even sold flour from the wheat fields that were planted specifically for the film: "Heimat" flour for "Heimat" bread.

The new film, which opened in German theaters on Oct. 3, isn't just a continuation of the TV series. The series depicted the period from 1919 to the turn of the millennium, or much of the last century. "Die andere Heimat," however, takes place in the preceding century, in the year 1840, a time that no one alive today can remember. But the film still revolves around people in the Hunsrück. Once again, Reitz has filmed almost everything in black and white, with a few bursts of color here and there. As in the series, he uses this stylistic tool to convey a certain idea: images are deceptive, and so is memory.

Is "Die andere Heimat" a success? It's already clear that the film will be polarizing. When it was screened at the Venice Film Festival (where it was not part of the competition), Reitz received standing ovations and the film was roundly praised in newspapers and blogs. But that certainly doesn't mean it will be a success. Reitz has often been feted in Venice, where he is a darling of film audiences. And, at his age, this applause also means paying tribute to his life's work.

But "Die andere Heimat" is a slow film, a true test of patience, which isn't for everyone. The film derives its vitality from its images, but it also feels like a big, defiant gesture against the fast pace of modern times. It literally forces viewers to slow down. Reitz seems to be conducting an experiment, testing viewers' strength with time.

It's a four-hour film, even though the story itself is relatively straightforward. It revolves around the Simon family, including the two sons, Jakob and Gustav, who both want to emigrate to Brazil. Entire cinema hours pass until one of them finally packs his things. This makes sense, because the film isn't about packing one's things, but about longing for another life and a different home.

Patience is also required of the viewer for another reason. Because Reitz wants to tell a story of ordinary people from a village, many of his actors are amateurs. Even the leading man, Jan Dieter Schneider, who plays Jakob, is not a professional actor, and this is apparent.

But in the end, when the audience members step out of the theater and into the real world, the contrast is overwhelming.

Film as an 'Island in This World'

Sitting in his production company in Munich, Reitz has placed his cap on the table next to him and listens carefully to get a sense of the effect his film has on people. At the time of our meeting in early September, not many people had seen the film yet. Obviously the applause from festival audience in Venice was gratifying, he says, but adds that he has also heard about press screenings in which the journalists ran out of the room, unable to cope with the film's intentional sluggishness.

Reitz justifies his decision to choose such a slow pace. "If cinema is to survive in the future, it will have to form an island in this world," he says. "One of the consequences of going to an island is that you remove yourself from the world to which you're accustomed."

The cinema is an alternative world, he explains, and it must remain that way. "And when a film says, 'Ok people, get out and find a different rate of breathing,' it achieves something therapeutic," he adds. "When the breathing rate slows down, so does the heart rate." Reitz isn't interested in the kind of success that can be measured in numbers, he says. "Success is a personal thing. I feel successful when I'm able to move people."

Kafka's diary entry "Went to the movies. Wept," is his motto. "I want to achieve an emotional depth. No one cries when they watch a film on their mobile phone."

Of course, he adds, nowadays the "resistance" to accepting a different storytelling rhythm is "greater than ever before." At the Venice festival, he says, he noticed -- not during the screening of his film, but with other films -- that audience members spent most of the time looking at their mobile phones. "I think that's barbaric," he says.

Reitz talks about his life and about the large leaps in time that suddenly occurred in his family, and about longing, which can change our sense of time.

Born Nov. 1, 1932 in Morbach in the Hunsrück region, he was a gifted student and the first in his family to earn a high-school diploma. Every day, he had to take a bus from Morbach to Simmern, 80 kilometers (50 miles) round-trip, where there was a high school. At 19 he went to Munich, where he still lives today.

His father was a watchmaker with his own shop in the center of Morbach, making him the town's specialist in the measurement of time. His grandfather was a blacksmith, following in the footsteps of 10 generations of blacksmiths. The changes in profession, from his grandfather to his father to himself, also had something to do with longing and with the fact that, in a new era, it was suddenly possible to fulfill one's dreams. "From the rough trade of the blacksmith to the finer trade of the watchmaker, and then to the filmmaking business, all in just three generations," says Reitz.

He had a brother, 14 years his junior, who took over their father's watchmaking business despite his own desire to lead a different life -- which Reitz only became aware of after his brother's death. It was his brother's story that gave him the actual impetus for his new film.

Guido Reitz lived a withdrawn life in Morbach, and even Edgar had little contact with him. "When we saw each other," he says, "we went out to eat and talked about the people we both knew, such as our sister." When his brother Guido died in 2008, Reitz received the keys to his house, which had also been his parents' house.

"When I entered the apartment, I saw books everywhere, including linguistic literature and magazines about the most remote languages of the world. I gradually discovered that my brother had been an independent scholar and was recognized in university circles." No one knew about it, including him and people in town, says Reitz.

But the academics at the Linguistic Atlas of Germany research center in the western city of Marburg were familiar with the name Guido Reitz, and they were happy to accept his property. The Guido Reitz Library is now part of the main library at the University of Marburg.

Edgar Reitz adapted motifs from his brother's story for his film. The main character, Jakob, is an introverted young man, too slow to win the heart of the woman he desired at the right moment, and yet too quick-witted to be happy working as a blacksmith or a farmer.

Jakob is interested in linguistics and dialects, especially Brazilian indigenous languages, and he learns to speak them. He wants to emigrate to Brazil, but at some point his brother Gustav wants to do the same thing, and because someone has to keep running their father's blacksmith's shop, only one of them can leave. One of the brothers must continue living a life of longing -- one in which time is expanded.

The house in which Reitz grew up and his brother lived until the end of his life hasn't changed much on the outside. The town of Morbach is currently having it renovated into a Reitz museum of sorts. There will be a café on the ground floor -- to be called Café Heimat -- while exhibits on Reitz's films are planned for the second floor.

The town's mayor, Andreas Hackethal, an amiable 39-year-old, is standing in front of the house, explaining why the town thinks the renovation is worth the cost. The goal is to associate the Reitz brand with the name Morbach.

Hackethal grew up in the town. As a boy, he sometimes went to the Reitz watch shop to have something repaired. There was usually no one in the shop, and only the creaking of the stairs indicated that the watchmaker was slowly making his way from his apartment upstairs down to the shop below. Hackethal has only now learned what Guido Reitz was doing up in his apartment -- research.

The mayor points to the two display windows on both sides of the entrance. There are covered up at the moment, because the building is still a construction site. In the past, he says, those windows were filled with watches and clocks -- all kinds of hands that kept turning and turning.