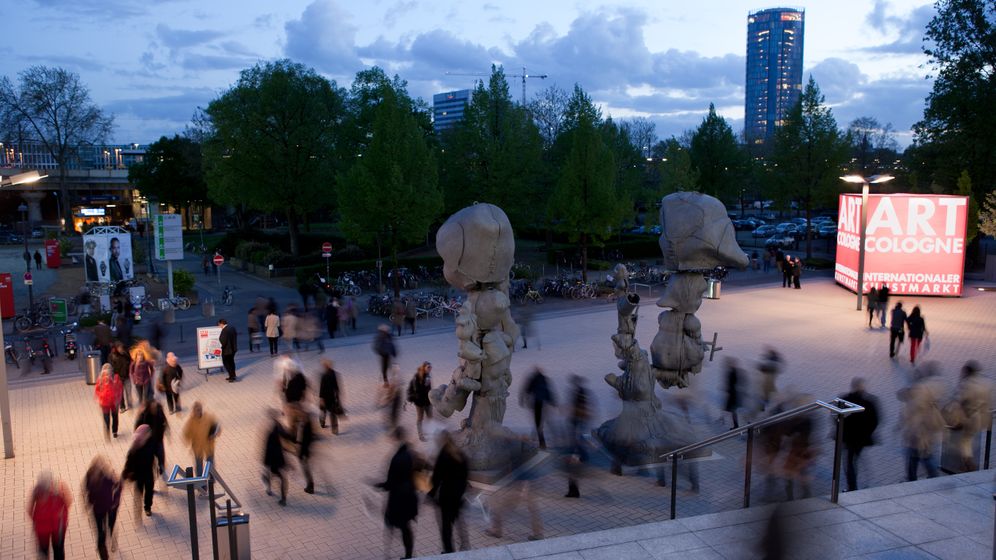 It was successful early on. But for many years, Art Cologne has been fighting for recognition in the swiftly changing art world. But now, the art fair is back, its efforts having paid off. The 46th Art Cologne opens on Wednesday, and by the time it closes on April 22, the event will have welcomed an expected 60,000 visitors, many of whom will have opened their wallets.

Just a few years ago things looked vastly different. The oversized, confusing and increasingly mediocre art fair had lost important exhibitors and market leadership. Wealthy collectors and visitors alike had turned their backs on the art fair. But it wasn't just the new art hub of Berlin and the founding of its 1996 Art Forum that sent Art Cologne into a tailspin. Neither was it the financial crisis or unfaithful international collectors. Rather, it was the fossilized structures, the unfocused profile and the unchanging offerings of unimaginative booths that turned the once booming event into a decidedly dreary affair.

But then, Daniel Hug came into the picture. The 43-year-old Zurich-born American was viewed with skepticism at first, but only briefly. The art public soon recognized his highly-engaged approach: He reduced the number of exhibitors from nearly 300 to 200, closed down two halls, and perhaps most importantly, he focused intently on quality. Hug, the grandson of Hungarian painter and Bauhaus school professor László Moholy-Nagy, also improved the lighting and had the floors painted black -- in addition redoubling efforts to cultivate contact with galleries and luring back those that had left.

The Cologne region is attractive to exhibitors, with residents of the predominantly Catholic Rhineland having developed a reputation since the 1960s and 70s for investing their money in art. The region remains an epicenter of art lovers, young and old, with more internationally important collections in the region than elsewhere.

Including Berlin. Young artists and galleries initially flocked to the German capital, attracted by the city's low rents. Yet despite the hype, Berlin today has but few noteworthy collectors and no significant up-and-coming buyers. The 20 to 30 young collectors in the city play only a minor role for many Berlin galleries, as they tend to purchase moderately priced pieces. Art tourism has developed into the only viable alternative, but such a scene requires events such as biennials or prominent exhibitions. The Art Forum attempted to live up to the challenge -- but failed and gave up last May.

That left Cologne as the only important art fair in Germany, and several Berlin galleries returned, including Carlier Gebauer, which previously had focused its energy on the Art Forum. Though the gallery takes part in many art fairs, it is hapy to be returning to Cologne, Ulrich Gebauer said. The gallery will even feature a solo show for Berlin sculptor Asta Gröting.

The Berlin gallery Eigen + Art returned three years ago after skipping Cologne the six years prior. "Cologne is cool," says Gerd Harry Lybke, who takes part in 12 fairs a year, including those in Hong Kong, London, Miami, Shanghai and Basel. "The art caravan isn't moving as much these days, which is why we have to do this, even just to test out the fairs," he said. The test winner last year was Art Cologne, where the gallery made the most sales. Whether it can achieve similar success this year without German painter Neo Rauch remains to be seen. This year Eigen + Art will exhibit works by Birgit Brenner, David Schnell, Martin Eder and Uwe Kowski.

Kölsch Instead of Champagne

Despite the recent improvements to the fair, it remains largely a regional event. Some 32 galleries from Berlin will be among the 200 exhibitors, many of them for the first time. But the list of international participants is relatively thin. Galleries from Asia, Russia, South America or India are the exceptions, with most international exhibitors hailing from Austria (13), Switzerland (11), and France (9).

The United States would hardly have played a role at all had Hug not cooperated with the New Art Dealers Alliance (NADA) to devote a quarter of one hall to 30 galleries -- 12 of them American -- for a stand-alone section with its own jury. To do so, however, he was forced to end the Open Space area, which offered galleries a chance to present their works outside of the small booths. But as always, newcomers will find a place at the New Positions section, while young galleries will find support at New Contemporaries.

This year's Art Cologne will be particularly exciting because of the excellent mixture of classic modernism, postwar art and accomplished works by contemporary artists. Furthermore, renowned German galleries such as Michael Werner, Hans Mayer, Karsten Greve, Michael Haas and Gisela Capitain, in addition to large international galleries like David Zwirner, Annely Juda or Hauser & Wirth will guarantee high quality and surprises that one can confidently invest in. Visiting Art Cologne is worthwhile, even when it is far from being the number one fair in the art market.

But it will be soon, Daniel Hug told German news agency DPA a few days ago, adding that one must "aspire to the greats." In short, that means topping Art Basel. A toast to that with the city's famous Gaffel Kölsch beer, instead of champagne as in Basel.