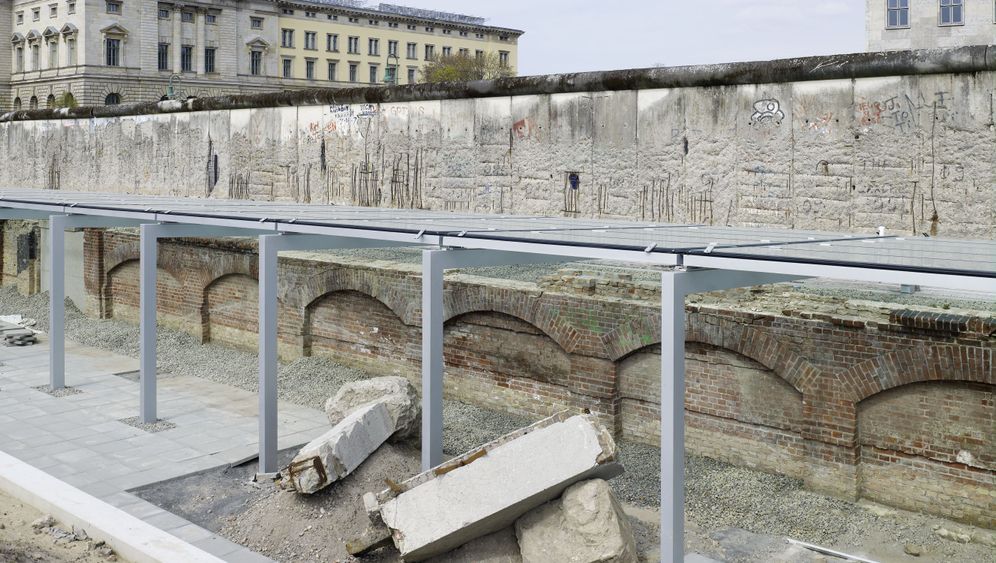 The index cards cover an entire wall, several hundred of them in pink, beige or green, containing names, dates of birth and handwritten notes. They are the details of some of the 7,000 former employees of the Reichssicherheitshauptamt, the amalgamation of the feared SS paramilitary group and Gestapo secret police force -- the men who worked at the very epicenter of the Nazi terror regime.

Sixteen of these thousands of cards that were collected by investigators in Berlin in 1963 jut out from the wall, representing the only former employees of this terror headquarters who ever faced prosecution. And three of these cards are raised further -- showing the trio who were eventually convicted. That is just three out of a total of 7,000.

The exhibition can be seen at the new "Topography of Terror" documentation center opened by German President Horst Köhler on Thursday, just two days before the 65th anniversary of the end of World War II. Unlike the nearby Holocaust Memorial, which is dedicated to the Nazis' victims, this modest metallic gray building is designed to highlight the role of the perpetrators, those managers and bureaucrats who from their Berlin offices administered mass murder across Europe.

Undisturbed by the Justice System

The center also reveals the worst historical legacy of the German Federal Republic. The fact that thousands of murderers and their accomplices were able to lead quiet lives in post-war Germany, undisturbed by the criminal justice system. The site of the exhibition is probably the most historically contaminated place in Berlin. The complex on what was once Prinz Albrecht Strasse, just a stone's throw from today's government buildings, was the headquarters for the Third Reich's brutal repression.

In 1933 the Gestapo made the former art school at Prinz Albrecht Strasse 8 its headquarters. The adjacent Hotel Prinz Albrecht became the SS headquarters in 1934 and that same year the SS intelligence service, the SD, took over the Prinz Albrecht palace on nearby Wilhelm Strasse. It was from this complex of buildings that Hitler's officials administered the concentration and extermination camps, directed the deadly campaigns by the SS death squads and kept an eye on the regime's opponents.

The "Final Solution" that was discussed at the famed Wannsee Conference on Jan. 20, 1942 was also prepared here. A group of ministerial officials and SS functionaries based here chose the venue for the conference of high-ranking Nazis, where the plan for the murder of Europe's Jews was hatched.

Hitler was rarely at the complex. He preferred to stay away from Berlin, sometimes ruling from his Wolf's Lair military headquarters and sometimes from his Bavarian mountain retreat. But this was where the brains behind the Nazi crimes, such as SS leader Heinrich Himmler and SD chief Reinhard Heydrich, had their offices.

And they surrounded themselves by men who didn't necessarily fit into today's stereotype of a Nazi war criminal, neither boorish sadists nor bloodless bureaucrats. They were ambitious university-educated men, aged around 30 and more likely to be ideologues than technocrats. They alternated between serving at the Berlin headquarters and in foreign posts, like young managers at a big company making their way up the career ladder. And after the rupture of 1945 most of them simply faded away into the background.

Erich Ehrlinger, for example, a lawyer from Giengen in southern Germany, who at the age of 25 was already a staff leader at the SD main office, before becoming a commander in the German security police in Ukraine and leading the 1b Einsatzkommando, or mobile death squad. A case against him in 1969 was dropped because he was deemed incapable of standing trial. Yet Ehrlinger lived for another 35 years.

Then there was the Munich businessman, Josef Spacil, who joined the SS at the age of 27. He was stationed in an occupied area of the Soviet Union as an SS economist, then came back to Prinz Albrecht Strasse to serve as a department head. He appeared as a witness in the Nuremberg Trials but was never prosecuted himself.

Photographs of a group of young lawyers, Werner Best, Ernst Kaltenbrunner and Hans Nockemann, stare down from the walls -- all were born in 1903. "One easily forgets that National Socialism was a young movement," say Andreas Nachama, the director of the new documentation center.

Nachama proudly walks through the building, showing its concrete walls and dark stone floor. "The site is our most important exhibit," he says. "We don't need impressive architecture, it is all there." He points to the views. Across the way is the former Air Ministry of Hermann Göring, now the German Finance Ministry. A few meters away is the Berlin state parliament, once the seat of the Prussian parliament. Adjacent to the site is a 170-meter section the Berlin Wall. No other place contains quite so much German history.

It is hard to understand today why this crucial historical site was neglected for so long. Between 1949 and 1956 the authorities demolished the war-damaged buildings. It might have been possible then to reconstruct the site, but people preferred to forget this place of horror. And the Communist authorities in the east of the city did their part by building the Berlin Wall in 1961 right along the former Prinz Albrecht Street. The four hectares of waste land fell into obscurity.

The West Berlin authorities at one stage planned a freeway for the site but it was never built. The cars came anyway, with young Berliners learning to drive in the derelict space. Another part of the site was taken over by a construction materials firm that salvaged parts of old buildings here.

It was a left-wing citizens group in the 1980s that rediscovered the site, not only as a place where the perpetrators planned the Holocaust but also as a site of the German resistance. Around 15,000 people were arrested by the Gestapo and kept in the ground-floor cells of Prinz Albrecht Strasse 8. People like Pastor Martin Niemöller, the Communist and later leader of East Germany Erich Honecker and the Social Democrat Kurt Schumacher.

Excavation work uncovered the floors of the cells, as well as parts of the walls and foundations. A provisional exhibition was put on in 1987 as part of Berlin's 750th anniversary celebrations. That original Topography of Terror, a row of information boards displaying text in the open air, stayed put for over 20 years and eventually would attract half a million visitors annually.

And it took almost that long until the documentation could be housed properly. An architecture competition from 1993 ended in chaos. The Swiss architect Peter Zumthor won with his plans for a 125-meter long, 17-meter wide construction across the site. But construction costs quickly got out of hand and, after construction had already been halted for five years, the Berlin state finally pulled the plug in 2004. The diggers moved in and tore down three stairwells and the foundations of the building. The still-born project had cost the city €12 million.

Then architect Ursula Wilms and landscape architect Heinz Hallman stepped in with their more modest plan. It was finished in two and half years and came in on budget costing €20 million, shared equally between Berlin and the federal government. It is functional and sober, and suits the concept of the exhibition and the consciously unfinished aspect of the site.

So a good end to a long-drawn-out process? "It speaks for the quality of the project that it survived all that," says Reinhard Rürup. The 75-year-old historian was responsible for building the original exhibition and in 2004 he resigned as academic director of the project because of the Zumthor debacle. In hindsight that sent the right signal, he says, as the politicians then decided on a fresh start.

However, valuable years were wasted, during which the area's government quarters and other memorials rapidly changed. The Topography now appears as a late-comer, says Rürup. And the opportunity was wasted to bring together the various Nazi memorials in the city under the umbrella of a single foundation. That would have been in a better position to cooperate with big documentation centers abroad, as well as the Holocaust museums in Washington and London and the Mémorial de la Shoah in Paris, he argues.

Nachama, however, says that the Topography of Terror was never supposed to supply comprehensive answers. "We are pleased if visitors leave us with more questions then they started with."

These visitors can stare in amazement at the photograph of Karl Wolff, head of Himmler's personal staff, as he stands happily in front of his house on Starnberg Lake and waters his plants.

Or at a color photo from 2002 that shows Friedrich Engel, the former head of the SS in Genoa, in a Hamburg court. Engel, known as the "Butcher of Genoa," was convicted in absentia by an Italian military court for the 1944 murder of hundreds of Italian captives. Germany's highest court, the Bundesgerichthof, then overturned his Hamburg conviction. Engel died in 2006 -- a free man.