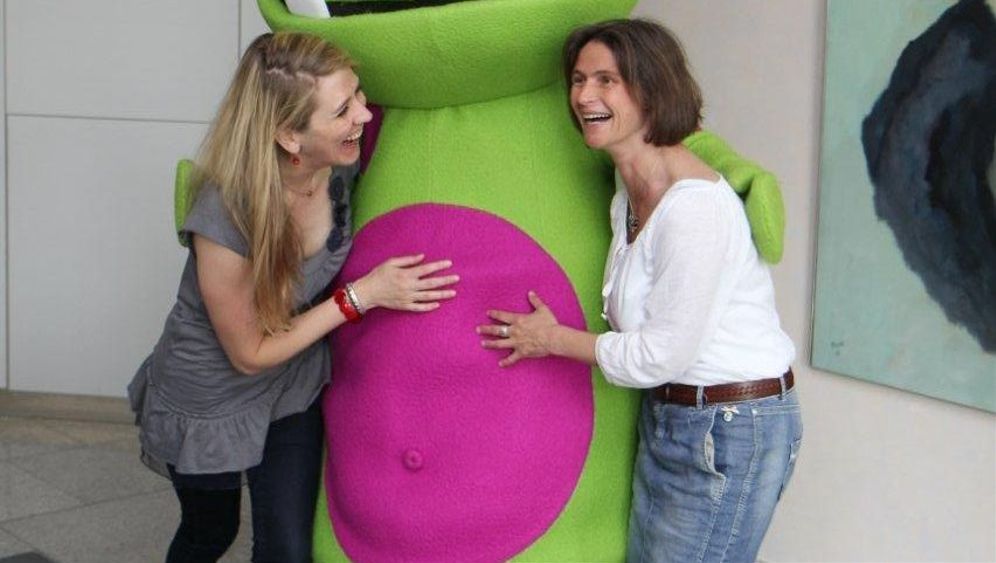 Photo Gallery: A Kids' Newspaper with a Monster Mascot

Since this spring, a German publisher has been tackling a monster of a new challenge. "He lives in newspapers in the printing plant," explains Eva Fauth, one of his creators. "He sleeps in newspapers, and he eats all the newspapers because he likes fresh news."

The headline-hungry monster, a mute learning mascot called "Kruschel," was developed by publisher Verlagsgruppe Rhein Main, which publishes regional dailies like the Allgemeine Zeitung in Mainz. Modeled after the silent mouse on the trailblazing German children's show Die Sendung mit der Maus, Kruschel first appeared in children's sections of the publisher's regional papers. But this May he got his very own eponymous weekly. Aimed at 7- to 11-year-olds, it's the first such publication in Germany, the biggest newspaper market in Europe, to be launched by an established printer.

Although the market for children's monthly magazines is strong in Germany, with titles like Grüner + Jahr's GEOlino enjoying a circulation of 200,000 and SPIEGEL's own nascent Dein SPIEGEL with over 60,000 -- a children's newspaper focused on reporting current events has never made it off the ground. Verlagsgruppe Rhein Main hopes their model will change this.

"Children like monsters because they're strange," Fauth, the paper's editor, says of the green and purple monster with a yellow baseball cap and a snaggletoothed underbite.

Financially, however, publishing a newspaper for children is a tricky proposition. German parents are uncomfortable with seeing traditional advertising in a children's newspaper, but the pricepoint at which they are willing to subscribe is low. Gaining a big enough subscriber base to cover publishing costs requires giving away lots of free copies to schools, which gets expensive.

According to the Federation of German Newspaper Publishers (BDZV), some 76 percent of German newspaper publishers have offerings aimed at children, including columns, pages and sections for young readers. The Hellweger Anzeiger daily in the state of North Rhine-Westphalia began publishing a children's page in each issue in 2006 -- earning it a national award for exceptional journalism for children. But a newspaper dedicated soley to the interests of kids has remained risky.

"You don't just start a new newspaper," says Fauth. "We thought about it first for a long time, talking with the head of the company about whether or not to do it." Market research followed to find out what children would read and parents would pay. It was important, Fauth says, that children feel the sensation of having their own newspaper, and not just a page among their parents' broadsheets.

So far Kruschel has sold some 2,100 subscriptions, which cost €4.90 ($6.32) per month. The number falls short of the amount of revenue needed to cover distribution and production costs, even with a lean staff of three employees working in one room in the publisher's headquarters. But five months into the project, the subscription numbers are still ahead of the publisher's projected circulation of 1,800.

OINK!, published on pink newsprint as a nod to the Financial Times, reached as many as 600,000 readers, many of them receiving the newspaper for free at school. "The newspaper itself was successful, but it didn't make any cash," says Henry, who stopped publishing the newspaper in 2009.

Henry's advice to anyone starting a children's newspaper is to couple with a major newspaper because financing distribution channels is otherwise too expensive. "Unless you're involved with or have access to the newspaper distribution cartels … you haven't got a dog's chance," he says.

Nevertheless, the untapped market for a children's newspaper in Germany offers considerable potential for growth. Though the industry is struggling elsewhere, newspapers are still a relatively viable business in Germany, where more than 68.4 percent of the population over 14 (some 48 million people) read a newspaper daily in 2011, according to BDZV.

Children are also increasingly important consumers. In 2012, German 6- to 12-year olds received more allowance than ever before -- an average of more than €27 per month -- according to the market-research firm Czaia's "2012 Child Consumer Analysis."

And in a country where print media is a piece of cultural patrimony and reading the news is practically a civic duty, children's newspapers are more than just a moneymaking scheme.

"Parents want their children to be informed and for them to able to talk about and have their own opinions on these things," says Kruschel editor Fauth. There's also obvious interest in Germany in developing a new generation of newspaper readers and, in the case of a regional publisher like Verlagsgruppe Rhein Main, teaching them brand loyalty.

The cardinal rule of publishing a newspaper for children is: Don't scare them. But otherwise there's a children's angle on most every news story.

Kruschel has already printed articles on the Federal Constitutional Court's recent ruling on the legality of euro zone rescue measures, the trial over Anders Behring Breivik's killing spree in Oslo, an influx of wild boars in downtown Wiesbaden, a small concert given by Justin Bieber at the airport in Frankfurt and the scandal surrounding topless photos of Kate Middleton on vacation in France.

And, as Kruschel finds its stride, it has promising examples to look to in Germany and abroad. Last January, Austrian media house Styria began publishing a children's newspaper aimed at kids called "Die Kleine Kinderzeitung," or "The Little Children's Newspaper," as a spinoff of its conservative newspaper for adults, Die Kleine Zeitung. The paper is free of traditional advertisements, but it is experimenting with products like sponsored animal poster pullouts to bring in revenue. In almost two years, the paper has attracted some 22,000 readers and has begun turning a profit, according to Petra Prascsaics, the youth publication's editor in chief.

"I hope that one day financial success won't be in the foreground, but instead our actual goal: Bringing children to the newspaper and informing them that the quality of information is important," she told SPIEGEL ONLINE. "Of course it's also our hope that the Kinderzeitung readers of today become the Kleine Zeitung readers of tomorrow."

In France, where the population reads on average half as many newspapers per capita as the Germans, the quiz game company playBac has managed to make a profit publishing three daily newspapers for children since the mid-1990s. Aside from subscriptions, the company also benefits greatly from the French postal system, which delivers the papers for much cheaper than Germany's would.

The newspapers, which have a collective circulation of some 150,000, also make some money from advertising. Co-founder Francois Dufour writes in an email to SPIEGEL ONLINE that 90 percent of the paper's revenue comes from subscriptions and 10 percent from advertising. "Business is impossible without advertising, but we are careful about which advertising we accept," he writes.

Investing in the Future

But the cheap, reliable postage that Dufour's publications enjoy in France, and advertising targeted at children, at least for now, are not feasible for the German papers.

"We'll have to see how Kruschel's balance sheet looks in a year," says Kerstin Goldbeck, an expert on the children's newspaper market who works at the Young Readers Initiative (JULE). "Generally in Germany it's not so easy to establish a children's newspaper independently from an existing subscription. In the end, it's all about distribution costs."

For now, Kruschel aims to continue increasing its circulation. Starting next year, the publisher will attempt to sell classroom subscription sponsorships to companies to skirt the advertising issue and pass along the costs of direct marketing through schools. In this arrangement, companies can reach children within the context of supporting literacy, the schools benefit from lesson material, and the newspaper stands to expand its circulation.

"With Kruschel," says Editor in Chief Fauth, "you can't earn money now. But that's not the first goal. It's not that we don't want to earn money ever, but for now it's an investment in the future."

4 Bilder Photo Gallery: A Kids' Newspaper with a Monster Mascot