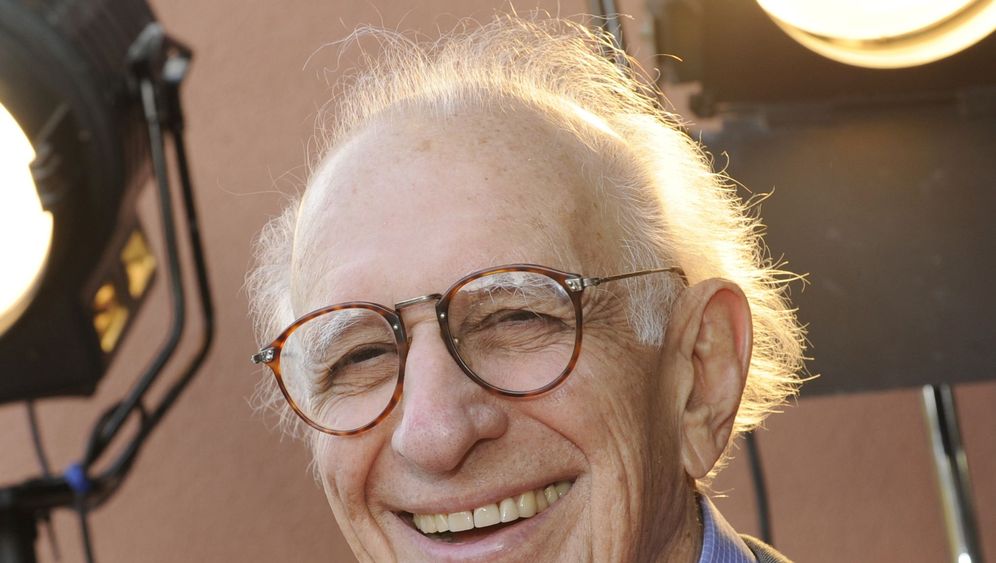 Editor's note: SPIEGEL ONLINE has also published an interview with Eric Kandel about his new book, which can be read here.

When Auguste Rodin visited Vienna in June 1902, art critic Berta Zuckerkandl invited him to spend an afternoon in her famous salon. As the hostess later recalled, the great French sculptor and Austrian artist Gustav Klimt had seated themselves beside two remarkably beautiful young women -- Rodin gazing enchantingly at them. Rodin leaned over and said to Klimt: "I have never before experienced such an atmosphere -- your tragic and magnificent Beethoven fresco, your unforgettable temple-like exhibition; and now this garden, these women, this music ... and round it all this gay, child-like happiness ... What is the reason for it all?"

Klimt slowly nodded and responded with a single word: "Austria!"

This is the opening scene in New York neuroscientist Eric Kandel's exploration of his native Vienna, a tome entitled "The Age of Insight: The Quest to Understand the Unconscious in Art, Mind, and Brain, from Vienna 1900 to the Present," published this spring in English and this month in German. It's a 656-page excursion that takes the reader all the way to the depths of the soul, the cavernous chasms of sex and the secrets of beauty. Here, in Vienna, the former capital of the Habsburg Empire, the author traces a major revolution in Western thinking.

The salons of fin-de-siècle Vienna served as a meeting place for poets, painters, philosophers, architects and researchers who were creating nothing less than a radical new perception of who we are. They abandoned the ideal of the Enlightenment and revealed, below the surface of presumably rationally-acting Homo sapiens, that human beings are driven by instincts and urges.

Sigmund Freud became the quintessential figure of this movement. But others also delved into the realm of the unconscious: Freud apparently saw Austrian author Arthur Schnitzler as an intimidating "double." In a remarkable letter written on the eve of Schnitzler's 60th birthday, the great psychoanalyst wrote to him: "I believe that fundamentally you are an explorer of the depths."

But Kandel is primarily fascinated by the Viennese painters' incipient interest in sexual drives and repressed desires. In his drawings, Gustav Klimt embarked on a daringly overt exploration of female lust. Oskar Kokoschka saw his portraits as "soul paintings," in which he sought to divulge the layers of an individual's inner life, which remain invisible to the naked eye. And Egon Schiele revealed himself in his self-portraits as plagued by extreme anxiety.

Kandel portrays Vienna as a hotbed of artistic creativity, a hub of intellectual activity and a cradle of modern scientific ideas -- and thus sketches a remarkably positive image of this city with which he has had a lifelong love-hate relationship.

Indeed, buried deep in his own soul is the memory of that autumn in 1938, when his parents gave him a shiny blue battery-driven toy car for his birthday. He still sees himself -- how he was so absorbed in steering it throughout the apartment. In his next memory, he is startled by a loud banging on the door. Even today, Kandel says the sound still echoes in his ears.

The Kandels were Jews, and they had to leave their apartment. It was "Kristallnacht," the so-called "Night of Broken Glass" pogrom of Nov. 9, 1938, in which Nazis launched coordinated attacks on synagogues and Jewish businesses in Germany and Austria. How could the 9-year-old Eric comprehend this? When the family returned to their ravaged apartment several days later, the blue car was gone.

His entire fascination with the dark side of the soul, his interest in psychoanalysis, memory and neuroscience, says Kandel, dates back to the last year that he spent in Vienna before he emigrated to the United States. He is also left with his bitter recollections of this city, where he first encountered the evil and brutality in mankind.

It is only now, at the age of 82, that Kandel is making peace with his native city. He says that writing this book was deeply therapeutic for him on a personal level. It helped him come to terms with the trauma of being driven from his home.

And yet "The Age of Insight" is so much more: In addition to making amends with his homeland, Kandel uses this as an opportunity to launch a bold project. His late work can be read as a manifesto for a new branch of science: neuroaesthetics. Kandel says that it's time to use the tools of his field -- neuroscience -- to unravel the mystery of human creativity, the enigmatic impact of art and the dark depths of the unconscious mind. His goal is to draw a connection between our emotional reaction to a Klimt or Schiele portrait and the electrical flickers of individual neurons.

We still have only a vague idea of what the budding field of neuroaesthetics can explain here. Kandel readily admits that what he sketches in his book is "merely a beginning." But he says that he loves to stand at the beginning and take the first step in a field of knowledge and explore what might be worth pursuing.

And who would be more eminently qualified to tackle such an ambitious project than Kandel himself? He has already founded an entire field of research and explored higher mental functions down to the molecular level. He uncovered the mystery of memory by proving that recollections are burned into the contact points of the nerve cells, the synapses.

Kandel's attempt to grasp the secret of the phenomenon of learning and remembering led to a career that exemplifies the scientific process of discovery: Step by step, the researcher proceeded from dealing with his own memory to deciphering memory storage in neurons.

When he attended university, he initially selected the obvious way of coming to terms with the historical experiences of his childhood. He studied history and focused on Kurt Schuschnigg, the chancellor who led Austria's Austro-fascist regime before the Nazis marched into the country.

Discovery and Disappointment with Psychoanalysis

Then Kandel discovered an entirely different way of accessing the world of his childhood. He was fascinated by the main psychological theory and model of the day: psychoanalysis, which, like himself, originally came from Vienna. Kandel eagerly devoured everything that Freud had written about sexual instincts, the unconscious and suppression. With the intent of becoming an analyst himself, he studied medicine, subjected himself to analysis and explored the emotional scars that remained from the time he had spent in Vienna.

Kandel was dissatisfied, though, with this new approach to gaining knowledge. Indeed, he felt that the Freudian model lacked convincing evidence: "Psychoanalysis has a degree of unreliability about it," Kandel argues. "You will never know whether you've found the truth. You may find a subjective truth, but you don't know."

When a career opened up in a neurobiological laboratory, where demonstrable truths were waiting to be discovered, he immediately seized the opportunity. From then on, Kandel stuck electrodes in nerve cells.

His mentor told him he was crazy when he announced that he wanted to find the id and the superego in the cerebral cortex. But he refused to be deterred. He remained convinced that the Freudian entities had to have their biological counterparts somewhere in the network of brain cells. In a sensational essay entitled "Psychotherapy and the Single Synapse," published in the New England Journal of Medicine in 1979, Kandel revealed his radical reductionist approach.

The dream of a new form of psychoanalysis based on neurons has never been fulfilled. But Kandel managed to unlock the secret of memory storage. First, he worked with sea slugs, then mice and finally human subjects to prove that there is a biochemical change in the synapses associated with learning processes. In 2000, he was recognized for this discovery and became the second psychiatrist in history to receive the Nobel Prize in Physiology or Medicine.

Yet even for someone like Kandel, the notion of a neuron-based understanding of how we perceive art is a bold vision. "We Jews call it chutzpah," he says with a grin. It must have to do with his age that now, at the end of his career, he's willing to go out on a limb like this. After all, he doesn't have much time left to attempt a great synthesis. "Life is a circle," says Kandel, so he's using this opportunity focus more intensively than ever before on the city of his roots and his lifelong passion for the Vienna Secession group and Expressionists.

It remains to be seen, however, whether advances in brain research can significantly contribute to our understanding of the artists and their work. Kandel is delighted, for instance, with Klimt's painting of "Judith," who, apparently still glowing with postcoital voluptuousness, is caressing Holofernes' severed head. This shows how female sexuality can be combined with aggression. The painting depicts a woman who triggers equal measures of desire and fear among male viewers -- long before Freud coined the term castration anxiety. But are we aided here by the knowledge that these feelings arise when a region of the brain called the amygdala is activated?

When examining Kokoschka's double portrait "Die Windsbraut" ("The Bride of the Wind"), Kandel is particularly fascinated by the way the painter uses colors to penetrate the emotional world of those portrayed. In the painting, Kokoschka depicts himself lying with his lover on a boat surrounded by stormy seas. Alma Mahler, with whom Kokoschka had a passionate affair at the time, is painted in green earthy tones, and apparently calmly sleeping. By contrast, Kokoschka is rendered in redder, thickly applied paint. He is awake and nervous, and seems to be deeply disturbed by the emotional turmoil of their liaison. Here, too, one questions whether it is helpful to know how these colors are processed by the visual cortex in the occipital lobe.

On the other hand, in Egon Schiele's "Tod und Mädchen" ("Death and the Maiden"), Kandel interprets a sense of isolation and desperation as the artist depicts himself in a comparable situation. Schiele, shown here as the messenger of death, has just ended his relationship with his girlfriend, Wally, because although she is a good lover he doesn't think she would make a good wife. They are shown in a final embrace on a rumpled sheet, where they have just had sex. While their bodies are still locked in an embrace, Kandel notes they are already staring past each other into space. But isn't the emptiness of these stares also effective without the insight that a humiliating rejection activates the brain's dopamine system?

Kandel, at least, says he is convinced that neurobiology can enrich our understanding of artistic creativity. He even points out a number of fascinating findings made by his colleagues.

Neuroscientists have been able to prove that sudden inspirations and insights are accompanied by characteristic, high-frequency brain waves in the right temporal lobe. There is additional evidence that indicates that the right frontal brain lobe plays a key role in the creative process, while the left frontal brain lobe actually impedes such activity.

This is supported by case studies of patients who have suffered trauma to the left sides of the brains. A 51-year-old housewife, for example, suddenly began to paint landscapes that she recalled from her childhood. A 56-year-old businessman dedicated himself so enthusiastically to painting that he won numerous awards.

Kandel admits that, at best, such findings give us only a vague sense of what can be achieved with experimentally well-founded neuroaesthetics someday in the future.

But perhaps, he adds, there is already a young researcher working in one of the world's laboratories who is determined to unravel the mystery of creativity -- just as Kandel set off half a century ago in search of the secret of human memory.

And Kandel hopes that his book will provide this intrepid researcher with food for thought.