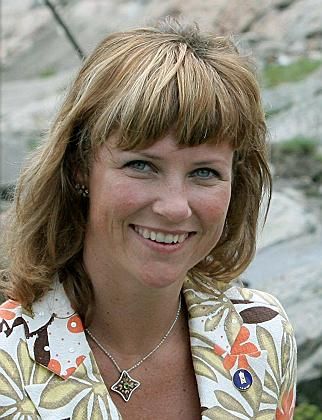 Princess Märtha Louise of Norway wants to help you communicate with angels.

When one thinks of European royalty scandals, it is generally Prince Harry (dressing as a Nazi) or Ernst August Prinz von Hannover (caught urinating in public) that comes to mind. But as Norway is demonstrating these days, its royal family can hold their own in the headline-generating department.

To whit: Princess Märtha Louise, fourth in line to the Norwegian throne, has generated a storm of criticism in the Scandinavian country for her plan to start a school that will teach people how to communicate with angels.

On Monday, one influential paper from the western town of Bergen demanded that the princess renounce her royal title. She has also been blasted by politicians, prominent journalists and TV pastor Jan Hanvold who accused her of blasphemy and said that Märtha was "an emissary from hell." There have also been calls for her to be excommunicated from the state Evangelical Lutheran church. Most critics accuse her of trying to use her royalty status for profit.

"As a princess and theoretically an heir to the throne (the princess) needs to relate to the rest of us others within a certain framework," Bergens Tidende wrote in a Monday editorial. Norway's leading daily Aftenposten also carried an editorial on Monday questioning Märtha Louise's business idea.

Dubbed by the Norwegian press as the "angel school," the princess' institution, named "Astarte Education" after "one of the oldest goddesses in the Middle East," offers a three-year program on communicating with angels, healing and hands-on treatment. The courses are scheduled to begin on August 22, with a weekend session in September devoted to helping participants "get into contact with the angels" and teaching students "how to create 'everyday miracles' in your own life."

"Angels, or light beings, are encountered in all religions," the Web site claims. "In our courses you will have the possibility to learn how to discover your inner source of truth and renew the natural contact you have with the angels and the divine Universe. The result will depend on your own approach and openness."

But even as the establishment continues to lampoon the princess, a trained physiotherapist who claims she is clairvoyant, her courses are reportedly already full. Furthermore, a recent survey conducted by the newspaper VG found that fully 40 percent of Norwegians believe that some humans possess supernatural powers and that communication with angels is not outside the realm of possibility.

The royal family has been traditionally taciturn in commenting on Princess Märtha's plans, though on Monday, fresh back from holiday, Queen Sonja said: "This is her own business venture. It's her responsibility."