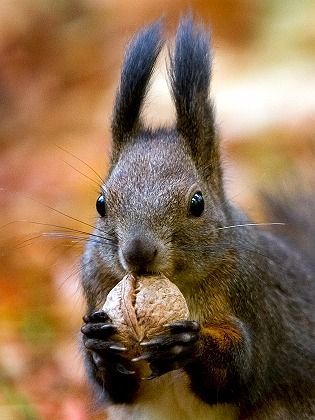 Just hand over the Kinder eggs and nobody gets hurt.

A squirrel in Finland is nuts about "Kinder Surprise" chocolate eggs -- so much so it has taken to shoplifting them from a grocery shop.

Even worse, the furry varmint is a repeat offender, going into the store in Jyvaskyla at least twice a day to steal the treats.

The candies, which are made by the Italian company Ferrero, take the form of a hollow chocolate egg containing a toy in a capsule inside. They are intended for children -- "Kinder" translates as "children" in German -- and are hugely popular in Europe where the toys have even become collectors items among adults.

The manager Irene Lindroos, who has dubbed the bushy-tailed thief the "Kinder squirrel," told Reuters that the animal always goes straight for the Kinder eggs. "Other sweets do not seem to interest it as much," she said. Surprisingly for an animal which is supposed to like nuts so much, it appears to prefer the plain chocolate Kinder eggs over other products by the company, such as Ferrero Rocher chocolates which contain a whole hazelnut.

"It removes the foil carefully, eats the chocolate and leaves the store with the toy," Lindroos said. However the tiny delinquent -- who clearly has no social conscience -- leaves the wrappers behind.