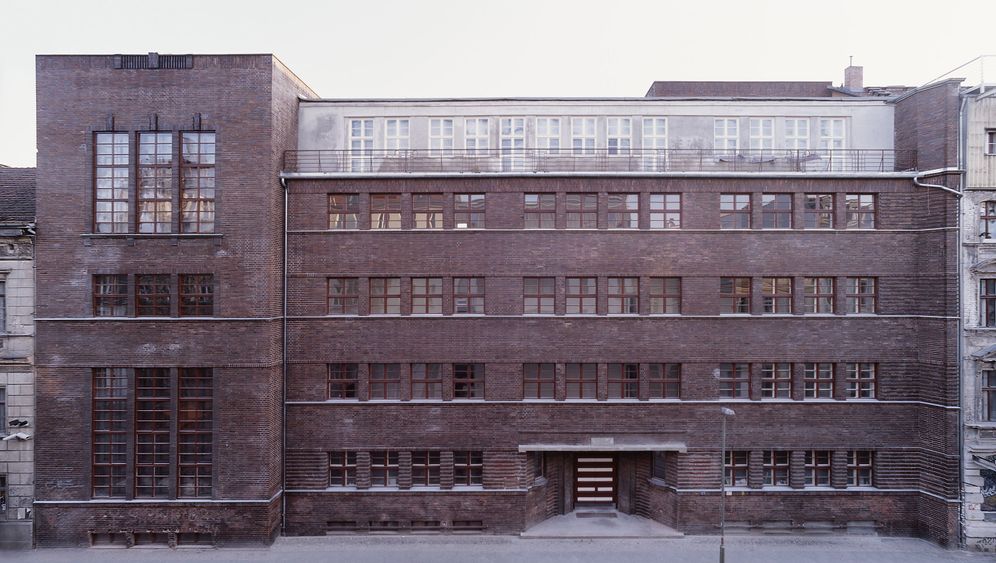 Michael Fuchs had no intention of resurrecting history. But the Berlin gallery owner found himself with no choice when after months of searching he finally came across an ideal -- albeit dilapidated -- building for his new restaurant and gallery concept in 2010. It just happened to be the German capital's Jewish Girls' School, which opened in 1930 in the heart of the city.

Following extensive renovations, this Friday morning Fuchs, along with representatives of the Jewish community and the city, officially honored the building's architect Alexander Beer and the girls who attended school there with a porcelain plaque.

"The last time I saw this building it was covered in graffiti and cigarette butts were everywhere. It was revolting," said Beate Hammett, Beer's 82-year-old daughter. Beer, who also built the Jewish orphanage in the northeastern Berlin district of Pankow and the orthodox synagogue in the central district of Kreuzberg, was deported to Theresienstadt concentration camp in 1943 and died there a year later. Hammett escaped to London as part of a children's transport in 1939 and now lives in Sydney, Australia.

"This is an opportunity to think about the history of Berlin, especially the personal histories of those embedded in every stone in this neighborhood," said Berlin's secretary for education Mark Rackles at the ceremony. "There is a problem with getting the younger generation to remember."

Hammett only found out about the building's existence a decade ago when the director of the Jewish center in Berlin sent her a city map of her father's buildings. Since then she has lobbied the city, writing letters to the mayor, to restore it. The spry, stylish octogenarian in berry lipstick said she was "delighted" to make the long journey from Sydney to Berlin for the dedication ceremony. "This trip has been so emotional," she said. "I've been treated like a princess."

Since its construction by what was then a wealthy Jewish community, the building has gone through several incarnations throughout Berlin's tumultuous history. The 14-classroom school opened its doors in 1930 to 330 local girls in the heart of a posh Jewish quarter, now in Berlin's Mitte district. After the Nazis shut the school down in 1942, they used the building as a deportation center, a hospital and center for the Hitler Youth. In 1950 it became a secular, co-ed school in what was then East Berlin. The Bertolt Brecht secondary school finally closed after German reunification in 1996 for lack of students and sat empty for more than a decade. By the time the Jewish community recovered the building in October 2009 as part of the Jewish Claims Conference it was run-down, with a leaky roof and moldy interiors.

"We thought about making it into another school, but decided not to for economic reasons," said André Lossin, manager of Jewish community operations in Berlin. The building was falling into further disrepair by the day. Annual insurance and upkeep cost about €40,000 ($52,600). "We knew we needed another solution fast," he said.

The timing was serendipitous for Fuchs and his business partner and long-time friend Stephan Landwehr. Their idea was to create a space with multiple eateries and galleries. "We wanted to do something lively, where people are here around the clock," said Fuchs, who has been a gallery owner in Berlin for more than two decades. Landwehr, who along with Jessica Paul and Boris Radczun, owns high-end steakhouse and Berlin celebrity haunt Grill Royal, wanted to open a restaurant serving food that recalls pre-war German cooking.

The 3,300-square-meter (36,000-square-foot) building could not have been more perfect for what they envisioned, being one of the few structures in the neighborhood that embodies the modern feel of the interwar period. When Berlin's Jewish community decided to build the school in the 1920s, the other structures in the area had long since been built. But architect Beer designed the school in the style of the times, called New Objectivity, which emphasized light, air and space.

"This building is insanely well built," said Landwehr from a plush, dark green upholstered booth at his new restaurant Pauly-Saul. "This is an awesome room, just look at the windows," he said, pointing to the expansive view of the leafy street outside. The impossibly high ceiling in the dining room, once a gym for students, is now filled with amber-hued Murano glass chandeliers. Two debonair stuffed foxes wearing green hats and carrying walking sticks, by artist Daniel Richter, decorate the corners.

After six months and multiple rounds of voting, the Jewish community eventually approved Fuchs' idea by a two-thirds majority. He then had to tackle the delicate task of adapting his original concept while simultaneously honoring the building's tragic history. Instead of building yet another Berlin war memorial, he wanted to bring life back to the school's rooms. "One stumbles over history in this building every day without trying," said Fuchs, whose eponymous gallery is housed in what used to be a school assembly room. In the end, Fuchs, who has a 30-year lease on the building, added a few elements that pay homage to Jewish culinary traditions, without changing other aspects. Renovations took six months.

The new plaque on the outside of the unmarked building is the only overt remembrance of the Holocaust, giving no hint of what awaits inside. Behind heavy wooden double-doors, the original cream, red and green tiles line the foyer. Concrete floors and an open staircase give the building an industrial feel, while subtle touches like silver-plated columns that have miraculously survived the decades recall its past. "Those kinds of things just don't exist anymore," says Landwehr.

Berlin galleries including Eigen + Art, Camera Works, along with The Kennedys museum, have set up outposts on the building's upper floors, in rooms where girls had their lessons.

Due to the building's inherently sleek design, the originally rustic plans for the Restaurant Pauly-Saul and the attached Pauly-Bar got a more glamorous makeover than Landwehr initially had in mind. There is an open kitchen with a rotisserie in the back, along with a carving station in the dining room to accommodate his concept of bringing back rustic German cuisine using the whole animal, rather than just cuts of meat. Sausage (yes, pork is served) and bread are made from scratch. The menu at Pauly-Saal reflects the ingredients local producers from the surrounding states have on hand. "The opening in February was tough," says head chef Siegfried Danler. They had a lot of lentils and potatoes on the menu to start.

Another culinary addition, the Kosher Classroom on the ground floor, is decorated with a chalkboard from the school. The private dining room will serve Shabbat dinner on Fridays and a mostly vegetarian Sunday brunch from high-end kosher caterer Michael Zehden, who has fed everyone from the pope to German Chancellor Angela Merkel. Across the hall, facing the street, the Mogg & Melzer Delicatessen will be open starting at the end of April. It will be a more subtle homage to Jewish culture, bringing the classic New York Jewish deli to Berlin with homemade pastrami sandwiches, barbecued brisket and matzo ball soup.

"If you are a German in Berlin you see reminders of the war when you just get on your bicycle and pedal towards the central Zoologischer Garten station," says Fuchs. "Sure we could have built another memorial, but this is a living concept."