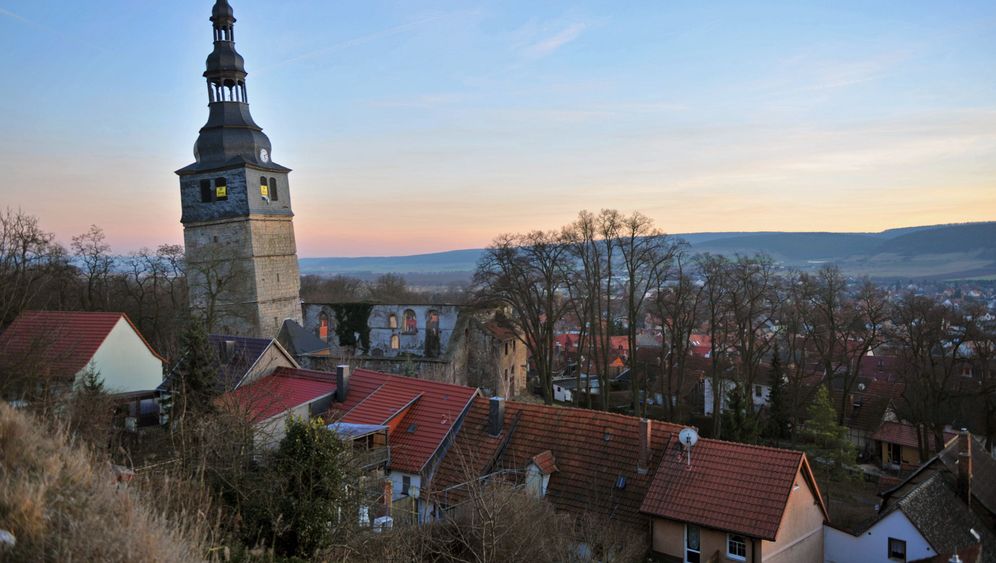 It may be more crooked than Pisa's leaning tower, but the distinction may not be enough to save one of Germany's most famous church towers.

For years, the spa town of Bad Frankenhausen, in the eastern state of Thuringia, has fought to save the dangerously tilting tower. But after the state this week rejected the town's latest proposal to stabilize the landmark, citing concerns over the long-term viability of the plan, there is no choice but partial demolition. The news was announced by the Protestant Church in Central Germany (EKM) earlier this week.

Listing some 4.5 meters (15 feet) from the perpendicular, the disused structure is sliding ever closer to collapse. Bad Frankenhausen has repeatedly put forward ambitious and expensive plans, but none could guarantee success, and some could even have damaged the building. With the danger of collapse growing daily, Thuringia's refusal for financial support on the most recent plan means that part of the 56-meter (184-foot) tower will be razed, beginning Dec. 7 at the earliest, the EKM said.

The church authority has already spent a hefty sum on maintaining the structure, despite the fact that it hasn't been in use since 1962. Sinking land east of the tower, in addition to an underground cavity to its northwest, has caused it to slant dramatically over the years.

But a glimmer of hope remains for the building, officially known as the Church of Our Dear Ladies on the Hill. Should the town of Bad Frankenhausen manage to come up with funding for the restoration, which the church estimates will cost €1 million ($1.3 million), the EKM will offer the project the money that has been set aside for the demolition. According to Bad Frankenhausen Mayor Matthias Strejc, this would be about €150,000.

The EKM's offer represents one last chance for Bad Frankenhausen to take on the project itself. On Monday, 21 representatives must decide whether they will purchase the 730-year-old building for a single euro from the EKM, thus acquiring full responsibility for its future. "The vote could be difficult," Strejc told news agency DPA. "But I hope for an easy majority for the acquisition."

The town estimates the project, which includes adding three steel struts to support the lopsided tower, will cost €800,000, some of which it has already managed to collect in donations from residents and a foundation. "We need to implement the plan by 2014," Strejc told DPA. "That means we collect more money and apply for more support, for example from the federal government."

Strejc, who has long campaigned for the tower, remains optimistic despite the daunting task. "An end to the tower would mean one more loss of another attraction for our underdeveloped region," he said.