The taxi driver isn't perhaps the best person to ask for lunch tips today. "It's Ramadan at the moment," he says. "We don't eat or drink until evening."

But Layne Mosler won't be denied, and a few moments later, the cabbie is setting course for Berlin's Kreuzberg neighborhood. There's a place there that serves Turkish pizza just like in his home village, he says.

For the past three years, Mosler, an American blogger better known as the "Taxi Gourmet," has been getting into cabs in Buenos Aires, New York and now Berlin and asking the drivers to take her to their favorite restaurants. It's a technique that has led her to some great discoveries.

"I've been in Berlin six weeks and I already know where to get the best köfte meatballs and the best künefe dessert, I know two places that have the most outstanding döner kebab -- and it's all thanks to cab drivers," she says. "These are places I would never have discovered by myself."

Her "taxi adventures," as she calls them, have yet to yield much in the way of German cuisine, however: The majority of the cab drivers she has encountered in Berlin have been Turkish. "I've been learning about the different shades and nuances of Turkish food. I've tasted things that were truly outstanding and that I wouldn't be able to get in New York." 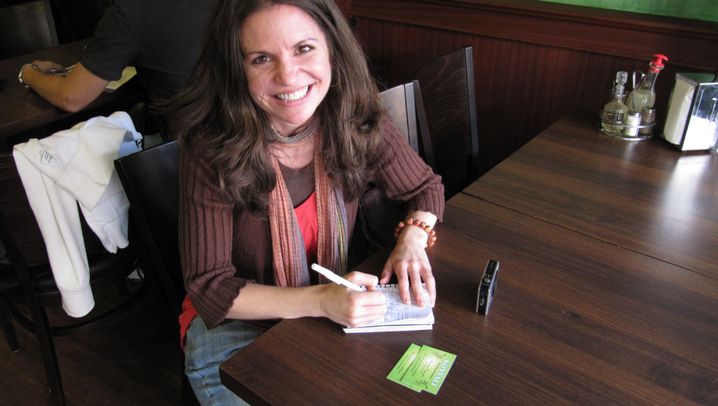 Mosler, who is originally from Orange County in California, writes about her adventures on her blog. Since she began it in May 2007 she has tried "hundreds" of restaurants, with somewhere between 30 and 50 percent of them worth going back to. "You have to eat at a lot of places before you find something really outstanding."

An obsession with food runs in her family. Her German grandfather was an artisanal butcher in Long Beach, the women on both sides of her family are "fantastic" cooks and her father makes the family's bread himself. "Our days are organized around food," she says. "When I go home, we're cooking, we're shopping, we're eating, and then the next day we start all over again."

Not in the Guide Books

The idea for Taxi Gourmet was born when she was living in Buenos Aires, learning tango and taking a lot of cabs. She discovered that the taxi drivers knew more about the city than anyone else. "I figured that they must know where to eat the best and cheapest things -- the things that aren't in the guide books."

She eventually got tired of writing about Argentine food ("I was running out of ways to describe beef") and moved to New York, where the taxi adventures continued. Probably no other city could have provided such rich pickings in terms of the diversity of its taxi-sphere. "In New York I never knew who was going to be driving the cab, or where they would come from," Mosler recalls. "The cool thing was that the food that people would recommend wasn't necessarily correlated with their background. I had a Moroccan cabbie who told me about a wonderful Cuban restaurant, and a Portuguese driver who recommended a great little Japanese ramen place."

While in New York, Mosler, an anthropologist by training, got her license as a yellow cab driver in order to deepen her understanding of her subject matter. "I could speak to the cabbies as a fellow driver, not as someone who was just curious about taxi driving," she recalls. "Driving the cab really helped me step into their shoes."

As he drives through Berlin, the taxi driver, whose name is Eren Polat, tells Mosler that he is originally from a village near the city of Konya in Turkey but came to Berlin six years ago to join his wife, who lives here. He worked in Turkey as the manager of a hotel restaurant, he says, explaining that he has to drive a cab in Germany because his English isn't good enough to work in a hotel here.

For Mosler, the interactions with the drivers are what make the taxi adventures so special. "You have these encounters with people who often surprise you, and it's very unlikely that you'll ever meet again. You may confess things or be a little more honest than you might be with a friend. That's what's special about being in a taxi cab."

At the restaurant, which is called Konyali, Polat comes in to explain the menu. He orders Mosler a Konya etli ekmek, a kind of Turkish pizza, and a glass of home-made ayran, a yoghurt-based drink. He insists on ordering dessert already. It's künefe, a filo pastry concoction stuffed with cheese, and it takes time to prepare, he says.

Several minutes later, the food arrives. The etli ekmek is a delectable mound of strips of home-made pide bread topped with minced beef and sprinkled with flat-leaf parsley. Ever the blogger, Mosler takes a picture of the dish before digging in. "It's really good," she says, then adds her highest praise: "I would definitely come back."

After her sojourn in Berlin, Mosler will return to New York to write a book based on her taxi adventures on three continents. As well as a portrait of the three cities and their food cultures, the book will also reflect Mosler's personal journey. "Taking cabs and having the drivers surprise me, and driving a cab and having passengers continually surprise me, has made me a much less judgmental person," she says. "Plus, I'm a pretty shy and introverted person by nature and this has forced me to really open up and talk to people."

Mosler says the same lessons that she learned from tango apply to her taxi adventures. "Tango is all about learning to follow and be very present but also very open and very fluid," she says. "You need to embody those same attributes when you get into a taxi cab and yield your destiny to the driver. That's basically what I'm striving for in my life."